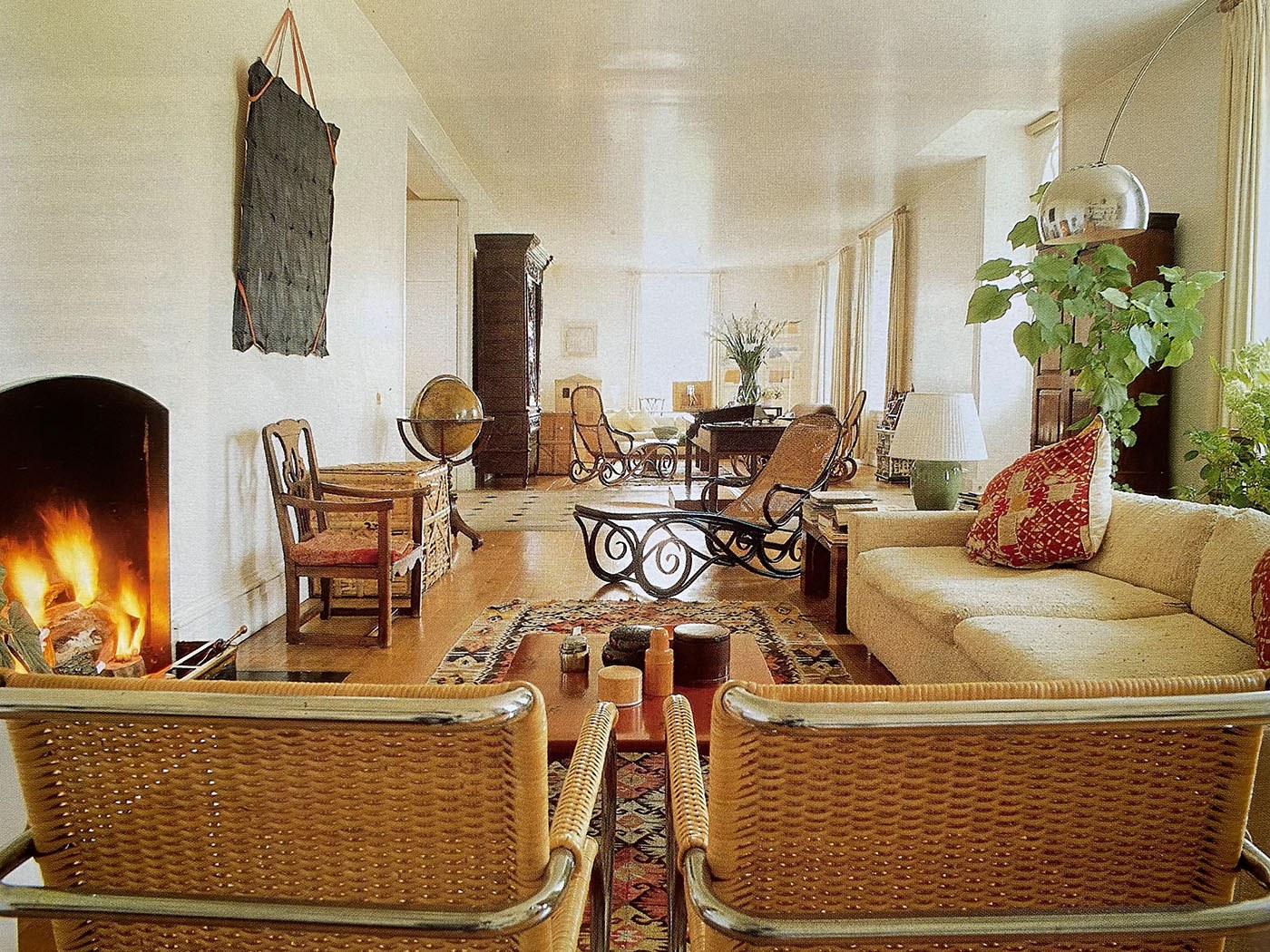 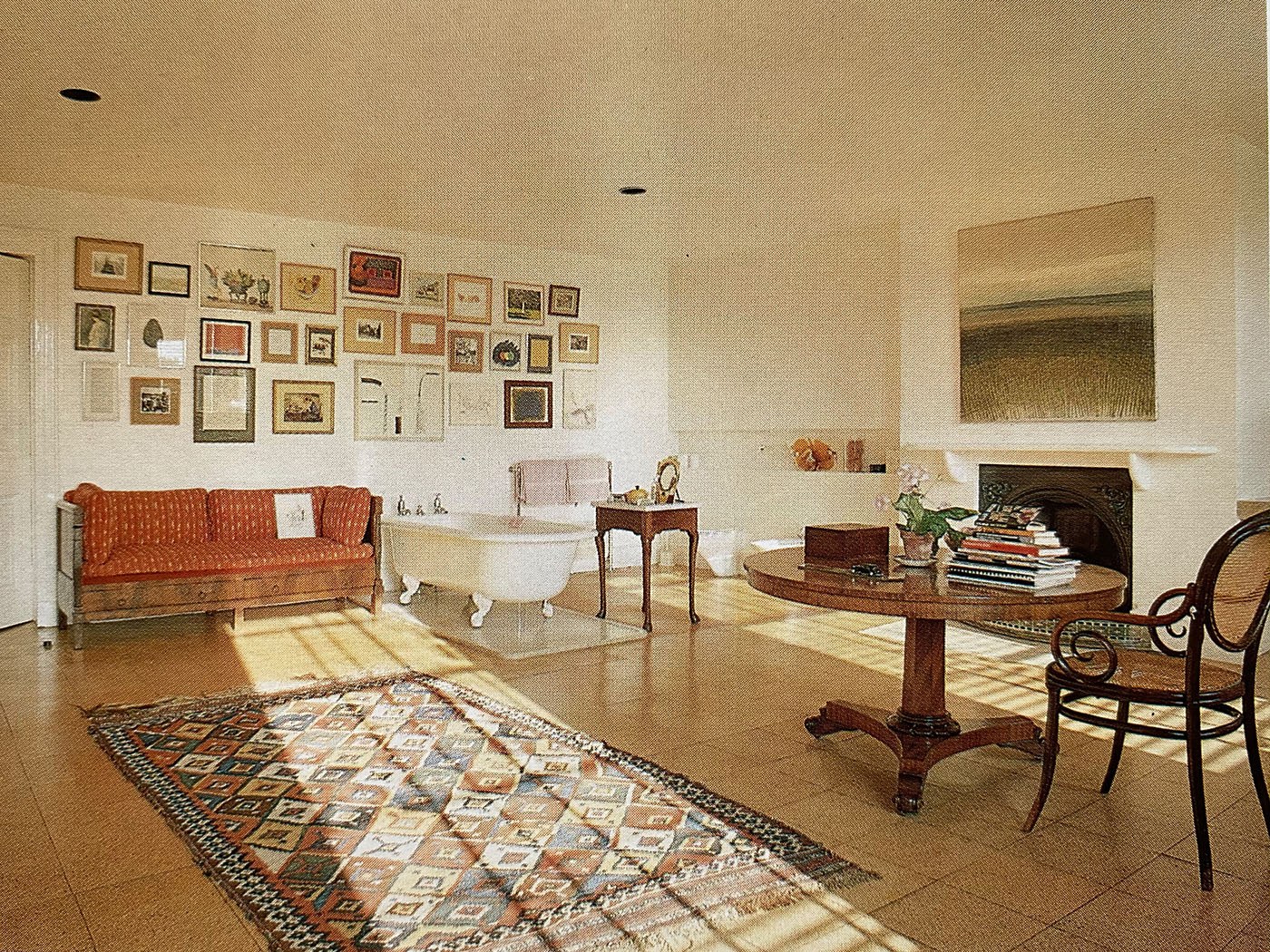 Hearing of Terence Conran’s passing to the great duvet in the sky was surprisingly emotional for me.

These are views of his country house near Hungerford, not particularly architectural, but each one archetypal for me – the best sitting room, the best kitchen, the best bathroom*. He understood how to live. Anyone who could make this as their bathroom is a hero of mine, but to have set up Habitat enshrines it.

I grew up in the country near Habitat HQ where (I later learnt) the climbing frame was by Eduardo Paolozzi, a friend of Conran’s. We called the seconds shop Shabitat, and most of our house was furnished from it.

When I was around big school age my parents finished an extension and let us each choose a page from the Habitat catalogue for our new bedrooms’ furniture. Mine was (fake) pine with red graphpaper roller blinds. My elder brother was the minimalist, white with a grey tubular bed.

Conran achieved so much for one life, and was such a force for good, that I thought I would try to write down some lessons gleaned from his productive life. It being a full life, there are quite a few (and, perhaps like all lives lived to the full, it wasn’t all good, and the bad lessons to learn from are also here, in italics):

Be entrepreneurial in (at least some aspect of) life.

Always have a project (he opened his latest restaurant last year).

Exam results don’t mean much if your goal is not to take more exams.

Education should be loose and wide-ranging and encourage creativity. Carpentry has value.

“A country that doesn’t make anything has lost its sense of pride.” (In response to the rise of Thatcherism.)

See things with a sense of freshness, right to the end.

Eat well, and drink well. (This is not the same as eat grandly, or drink lots.)

Find your sartorial look early on in life, eg. blue shirts, and stick to it, to save time and keep life simple.

Realise you don’t have to be the best, eg. designer, in your field, eg. design, to make huge and positive change and to expand the reach and relevance of that field. [See also exam results.]

Have a big house. Or, ideally, have three:

Triplex penthouse, Shad Thames, London: fronting water just round the corner from the original Design Museum in London’s Docklands, over the Conran Design offices, in an elegantly-crafted modern warehouse by Hopkins Architects in 1991 for David Mellor (of cutlery fame); bought in the ’90s, I think;

Farmhouse, Provence: a handsome rust-red-rendered traditional mas in quintessential South of France, surrounded by lavender and olive groves (part of his French dream; sold in bad times in the ‘80s).

Grandeur does not make for happiness. (His grandest house, on Eaton Square in Belgravia, was unloved, unlike, palpably, the others.)

Live above or next door to the office.

A posh accent is acceptable if combined with humility of goal (to improve people’s everyday lives). On balance, don’t accept a knighthood. There’s more kudos in turning it down.

Have a feel for the times; live in your times; change your times for the better.

Have a mission in life (and follow it). Retain control; don’t relinquish it, or allow it be taken from you. Money comes with strings.

Write books. And then write more.

Recognise, and use, the skills of people around you. (He didn’t actually write the books in his name.)  Credit and don’t exploit the people around you. (He didn’t write the books, but you wouldn’t know it; his ex-wife Caroline’s input to their houses, to Habitat, and to his life went more or less unacknowledged, and was cruelly disparaged by him during their divorce. Sexism is not good.)

Be prepared to set out your stall, and proselytise.

The power and value of graphic design and typography, done well.

Be prepared for change, or even: always expect and assume change: make change a constant state of being.

Hold the past in appropriate respect rather than awe – it is the past. Note, value and save the good bits, eg. Covent Garden, which, with others, he saved from demolition in the 1980s, but allow yourself to ditch the redundant bits, eg. formal dining rooms (even if he did have one in the country).

Don’t let your life, or your home, be determined by how you found it, but live how you want to live – always, and not just for the three weeks of the year when you are on holiday.

Empty the contents of your house onto the street and only let back in what you need – his interior design advice/version of William Morris’s doctrine.

Live like a poor man, but with money (Picasso, but quoted by him).

Treat a child’s gayness the same as you would their being left-handed. (His reaction to being aware of son Jasper’s sexuality, apparent at an early age.)

Support and acknowledge talent in your children, even when it threatens yours. (Jasper took over the helm of the Conran Shop in the 2010s, injecting it with new products and reenergising it after the shops had become, frankly, stale and tired. An interviewer commented to Terence on the incredible turnaround; he was dismissive. Jasper resigned his involvement the next day, taking his new energising zeal with him, to the shops’ great loss.)

Have broad interests. Don’t broaden your appeal so as to be undefinable.

*even if the bath does face the wrong way… (later remedied)