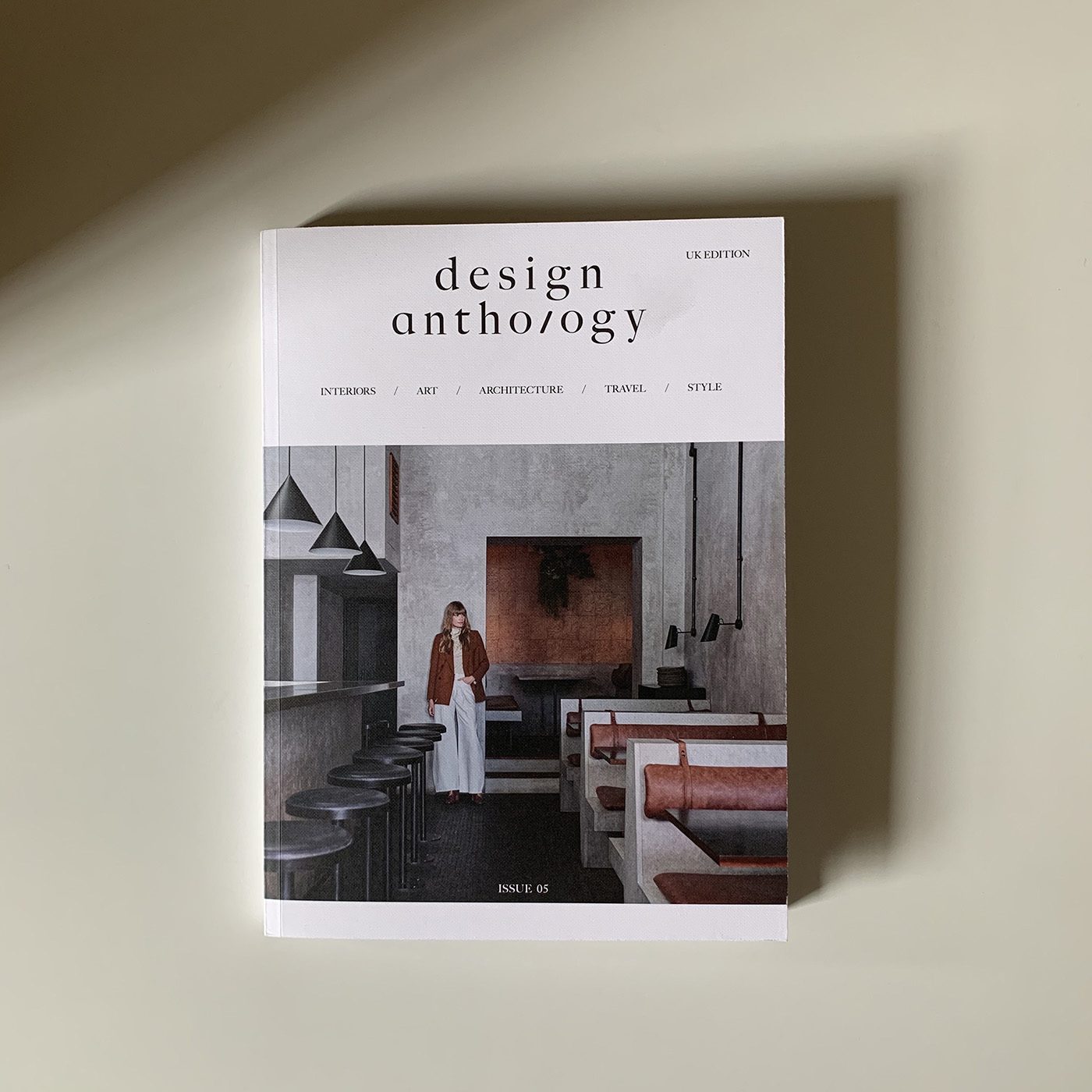 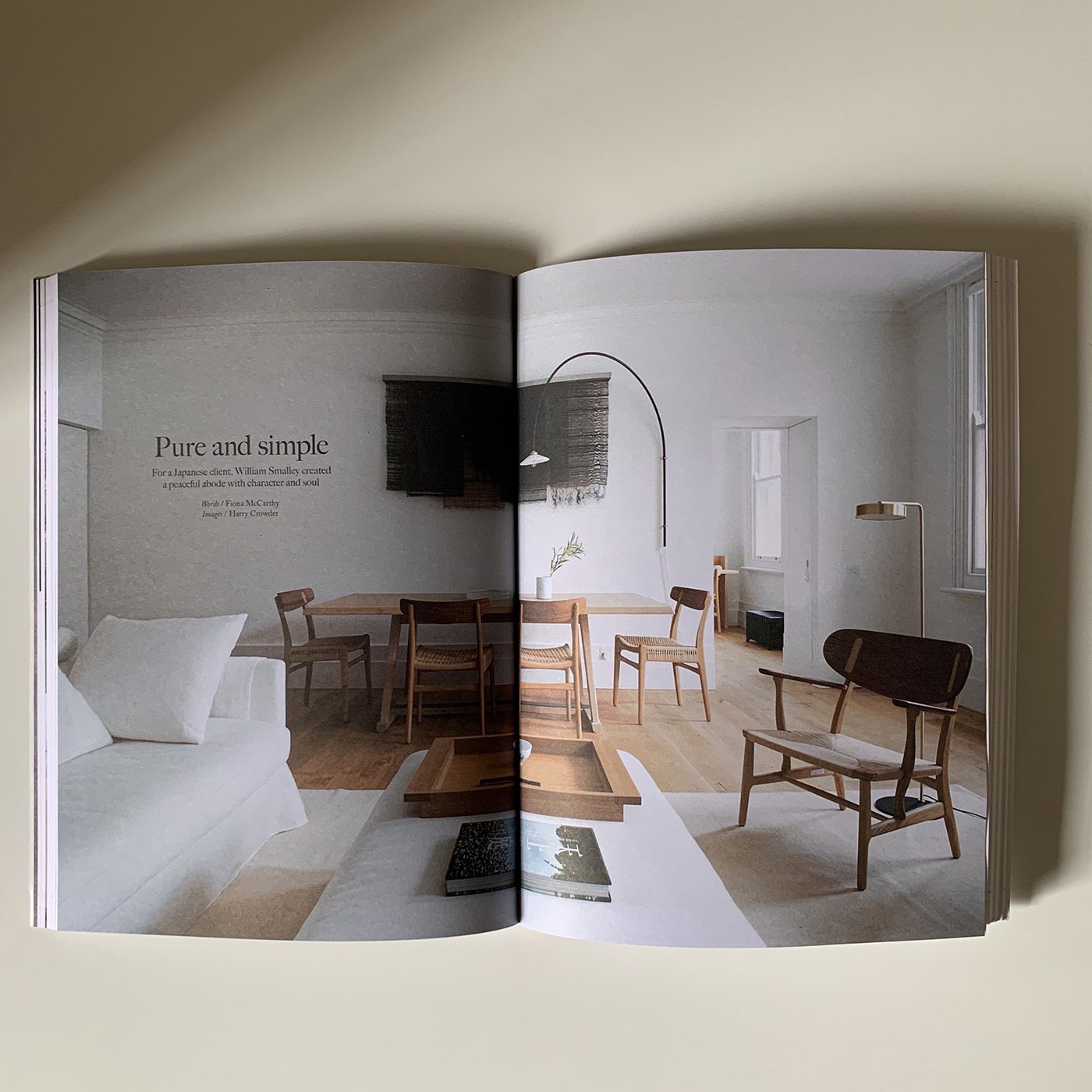 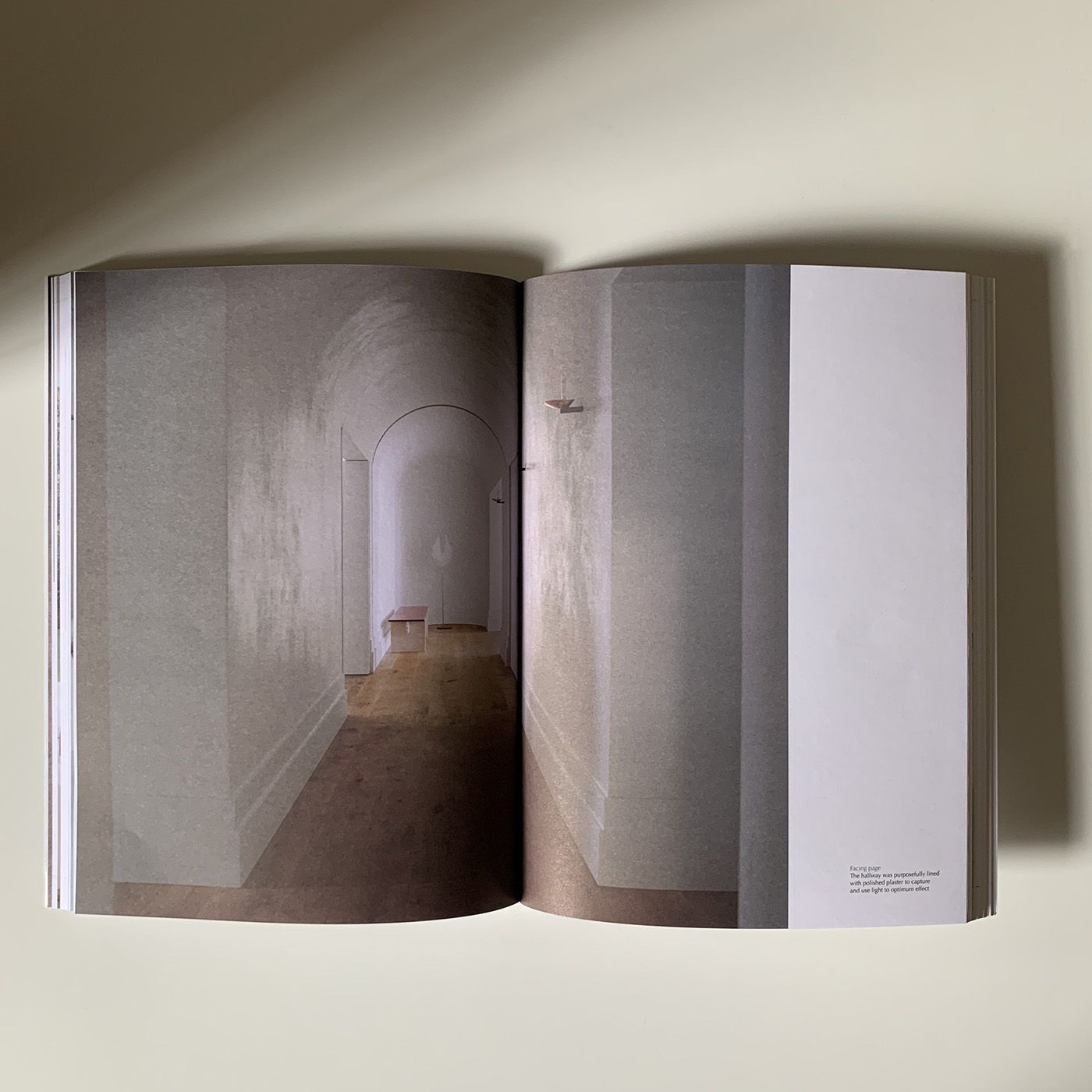 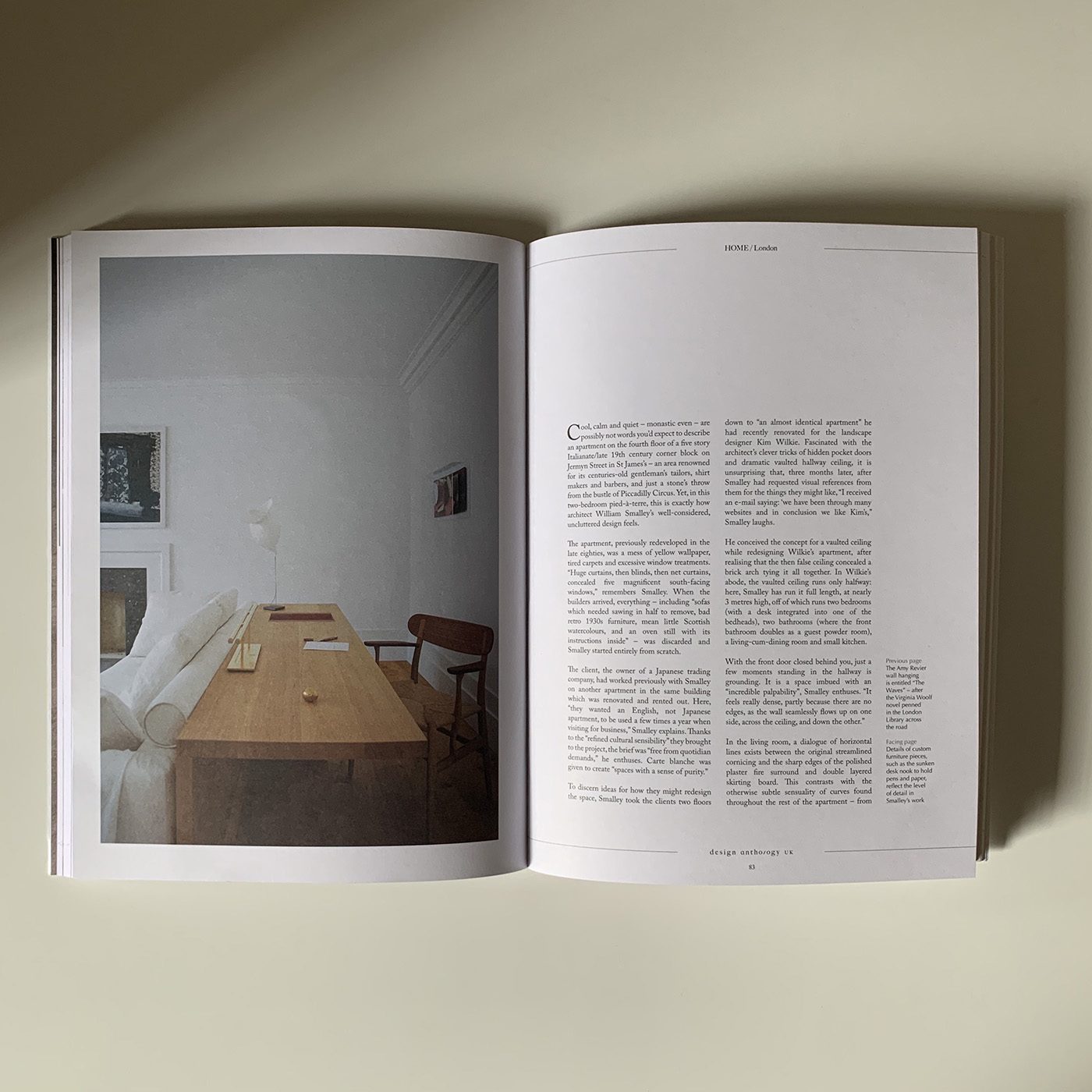 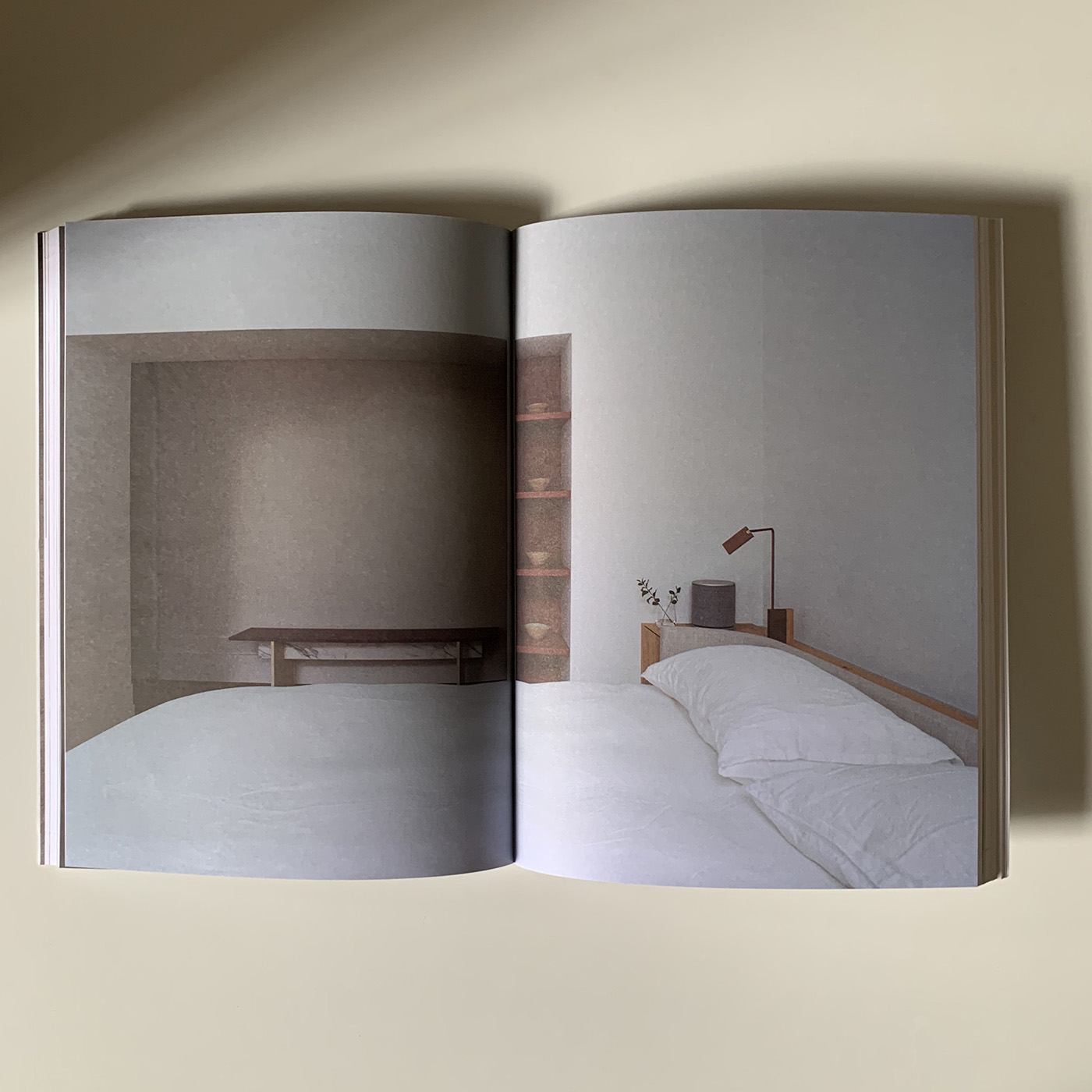 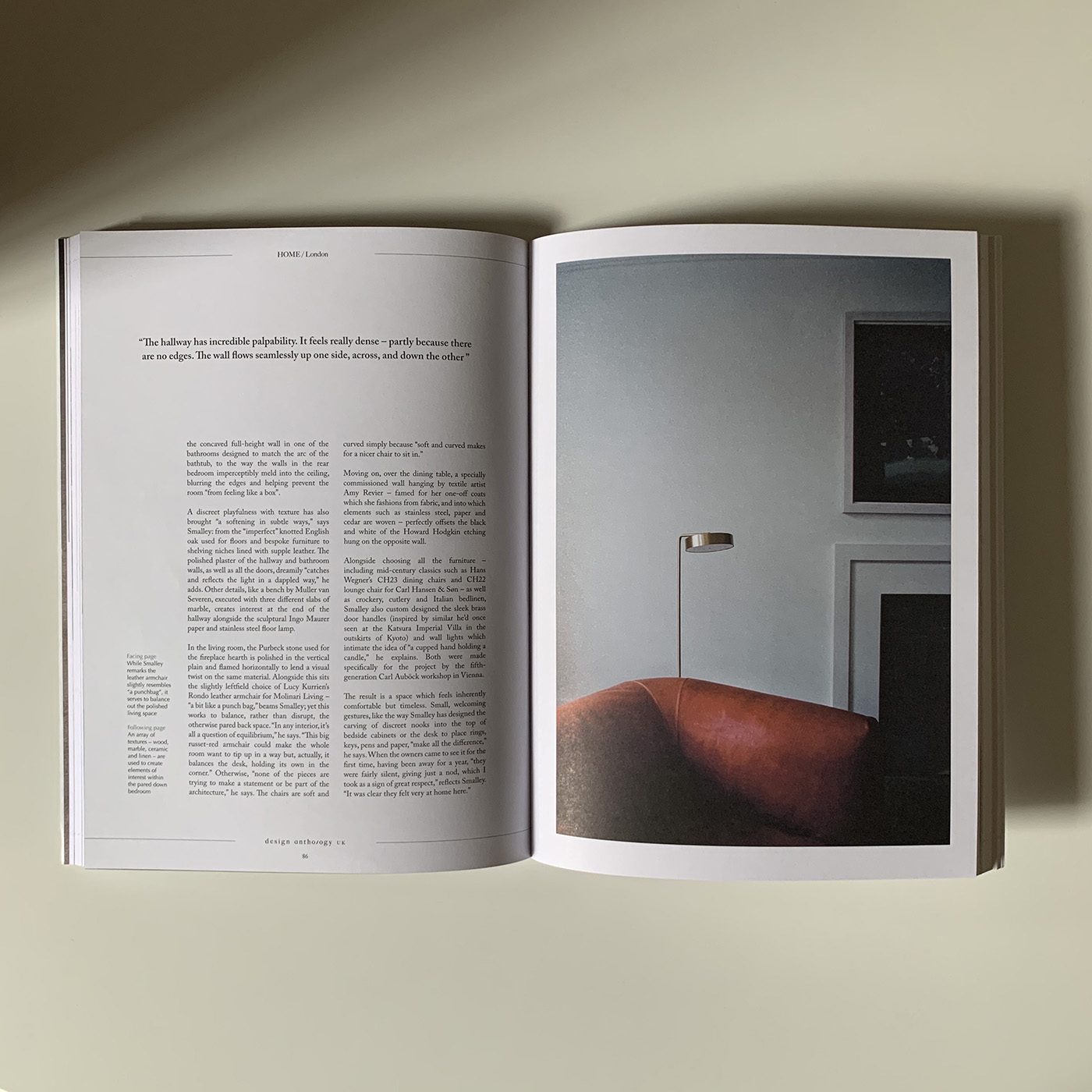 Cool, calm and quiet – monastic even – are possibly not words you’d expect to describe an apartment on the fourth floor of a five storey Italianate late-19th century corner block on Jermyn Street in St James’s – an area renowned for its centuries-old gentleman’s tailors, shirt makers and barbers, and just a stone’s throw from the bustle of Piccadilly Circus. Yet, in this two bedroom pied-à-terre, this is exactly how architect William Smalley’s well-considered, uncluttered design feels.

The apartment, previously redeveloped in the late eighties, was a mess of yellow wallpaper, tired carpets and excessive window treatments. “Huge curtains, then blinds, then net curtains, concealed five magnificent south-facing windows,“ remembers Smalley. When the builders arrived, everything – including “sofas which needed to be sawn in half to remove, bad retro 1930’s furniture, mean little Scottish watercolours, and an oven still with its instructions inside” – was discarded and Smalley started entirely from scratch.

The client, the owner of a Japanese trading company, also worked with Smalley on another apartment in the same building which was renovated and rented out. In their own flat, “they wanted an English, not Japanese apartment, to be used a few times a year when visiting for business,” Smalley explains. Thanks to the “refined cultural sensibility” they brought to the project, the brief was “free from quotidian demands,” he enthuses. Carte blanche was given to create “spaces with a sense of purity.”

To discern ideas for how they might redesign the space, Smalley took the clients two floors down to “an almost identical apartment“ he had recently renovated for the landscape designer Kim Wilkie. Fascinated with the architect’s clever tricks of hidden pocket doors and dramatic vaulted hallway ceiling, it is unsurprising that, three months later, after Smalley had requested visual references from them for the things they might like, “I received an email saying: ‘We have been through many websites, and in conclusion we like Mr Wilkie’s,'” Smalley laughs.

He conceived the concept for a vaulted ceiling while redesigning Wilkie’s apartment, after realising that the then false ceiling concealed a brick arch tying it all together. In Wilkie’s abode, the vaulted ceiling runs only halfway: here, Smalley has run it full length, at nearly 3m high, off which run two bedrooms (with a desk integrated into one of the bedheads), two bathrooms (where the front bathroom doubles as a guest powder room), a living-cum-dining room and small kitchen.

With the front door closed behind you, just a few moments standing in the hallway is grounding. It is a space imbued with an “incredible palpability”, Smalley enthuses. “It feels really dense, partly because there are no edges, as the wall seamlessly flows up on one side, across the ceiling, and down the other.”

In the living room, a dialogue of horizontal lines exists between the original cornice and the sharp edges of the new polished plaster fire surround and double layered skirting board. This contrasts with the otherwise subtle sensuality of curves found throughout the rest of the apartment – from the concave full-height wall in one of the bathrooms that follows the arc of the bathtub, to the way the walls in the rear bedroom imperceptibly melt into the ceiling, blurring the edges and helping prevent the room “from feeling like a box”.

A discrete playfulness with texture has also brought “a softening in subtle ways,“ said Smalley: from the “imperfect” knotted English oak used for floors and bespoke furniture to shelving niches lined with supple leather. The polished plaster of the hallway and bathroom walls, as well as all the doors, dreamily “catches and reflects the light in a dappled way,” he adds. Other details, like a bench by Muller van Severen, executed from three different slabs of marble, create interest at the end of the hallway alongside the sculptural Ingo Maurer paper and stainless steel floor lamp.

In the living room, the Purbeck stone used for the fireplace hearth is polished in the vertical plane and flamed in the horizontal to lend a visual twist on the same material. Alongside this sits the slightly left-field choice of Lucy Kurrien’s Rondo leather armchair for Molinari Living – “a bit like a punch bag,” beams Smalley; yet this works to balance, rather than disrupt, the otherwise paired-back space. “In any interior, it’s all a question of equilibrium,” he says. “This big russet-red armchair could make the whole room want to tip up, but actually it balances the desk, holding its own in the corner.” Otherwise, “none of the pieces are trying to make a statement or be part of the architecture,” he says. The chairs are soft and curved simply because “soft and curved makes for a nicer chair to sit in. “

Moving on, over the dining table hangs a specially commissioned wall hanging by textile artist Amy Revier – famed for her one-off coats which she fashions from fabric – into which elements such as stainless steel, paper and cedar are woven, perfectly offsets the black and white Howard Hodgkin etching hung on the opposite wall.

Alongside choosing all the furniture – including mid-century classics such as Hans Wegner’s CH23 dining chairs and CH22 lounge chair for Carl Hansen & Son – as well as crockery, cutlery and Italian linen bedlinen, Smalley also custom designed the sleek brass door handles (inspired by similar ones he’d seen in the Katsura Imperial Villa in the outskirts of Kyoto) and wall lights which intimate the idea of “a cupped hand holding a candle,” he explains. Both were made specifically for the project by the fifth-generation Carl Auböck workshop in Vienna.

The result is a space which feels inherently comfortable but timeless. Small, welcoming gestures, like the way Smalley has designed the carving of discrete nooks into the top of bedside cabinets and desk to place rings, keys, pens and paper, “make all the difference,” he says. When the owners came to see the new apartment for the first time, having been away for a year, “they were fairly silent, giving just a nod, which I took as a sign of great respect,” reflects Smalley. “It was clear they felt very at home.”