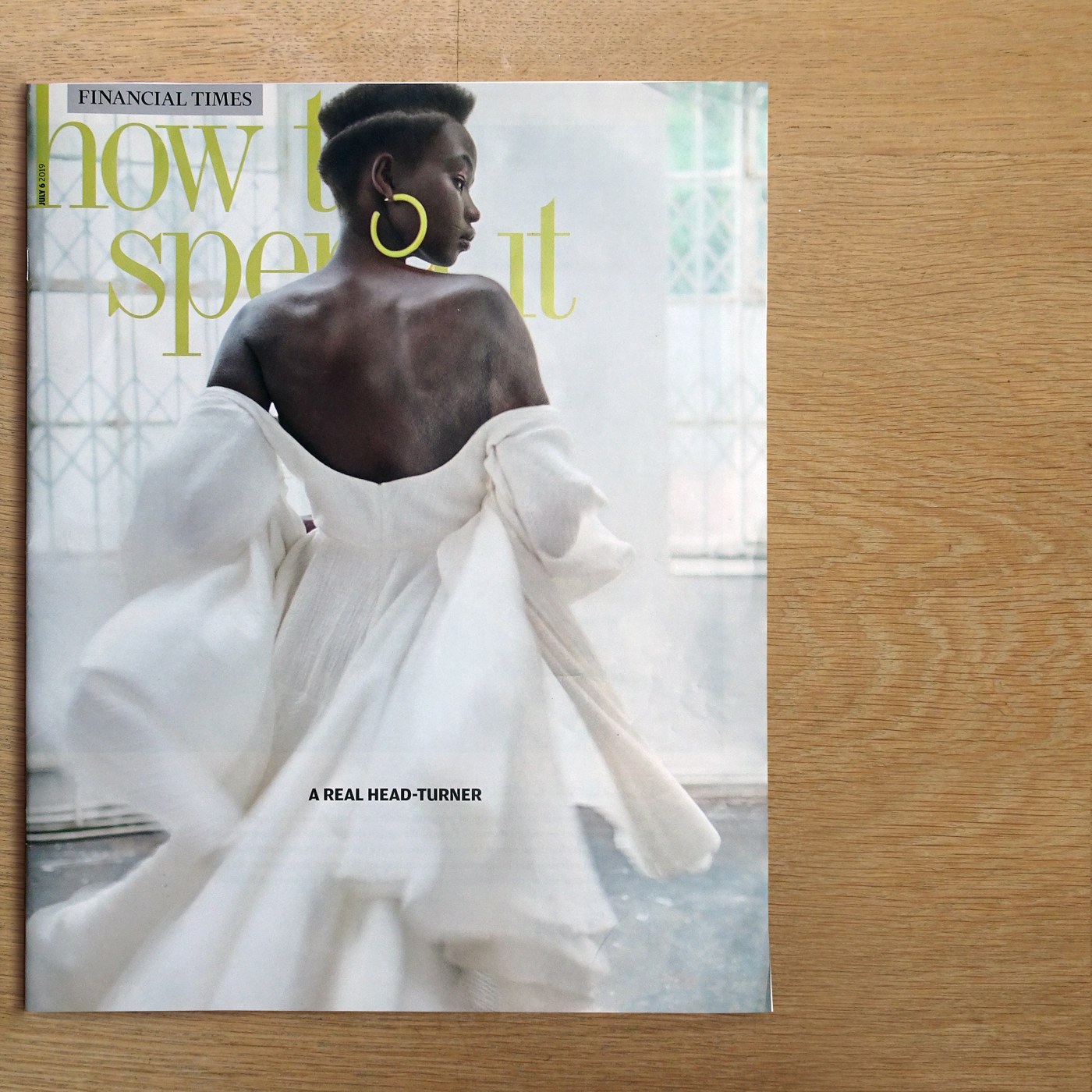 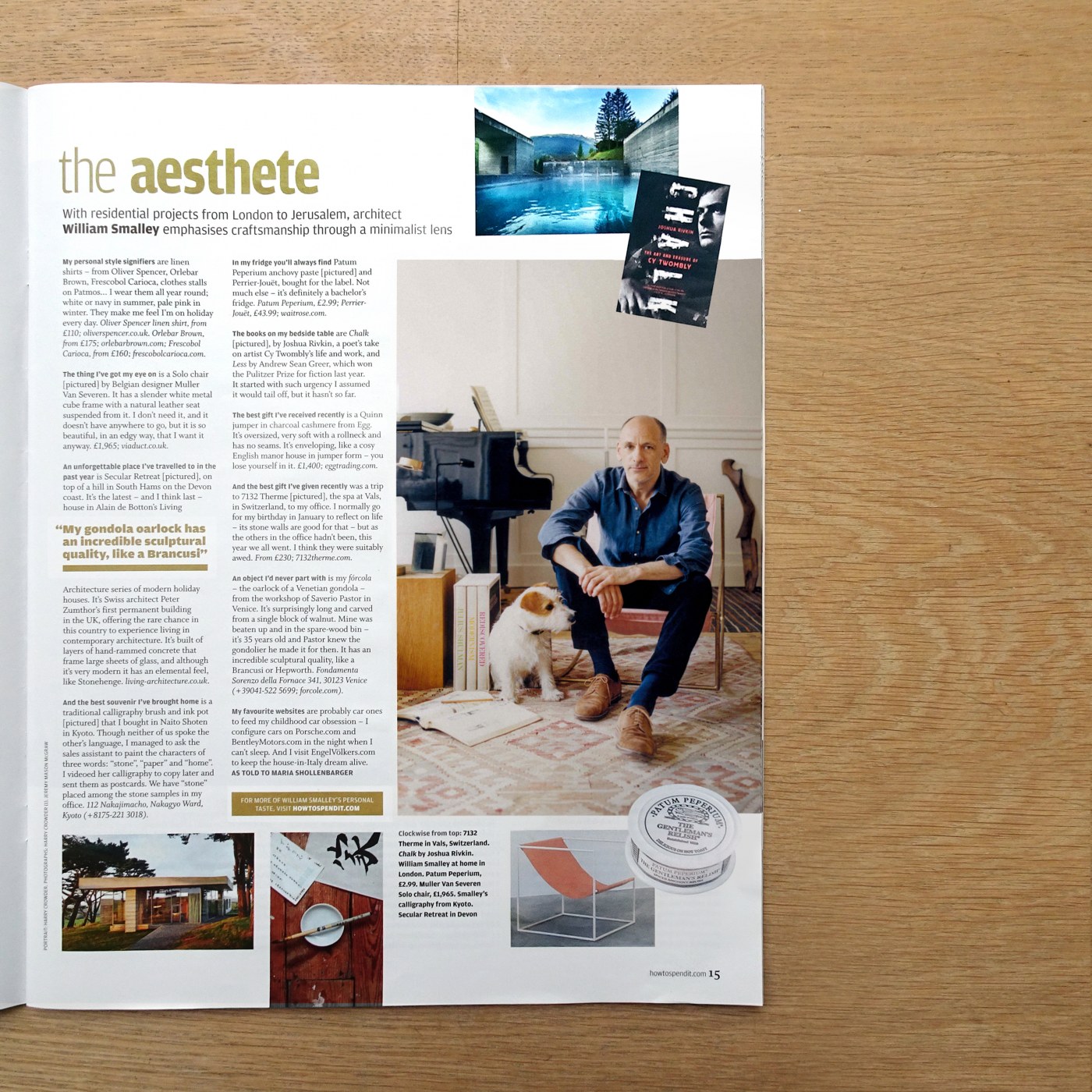 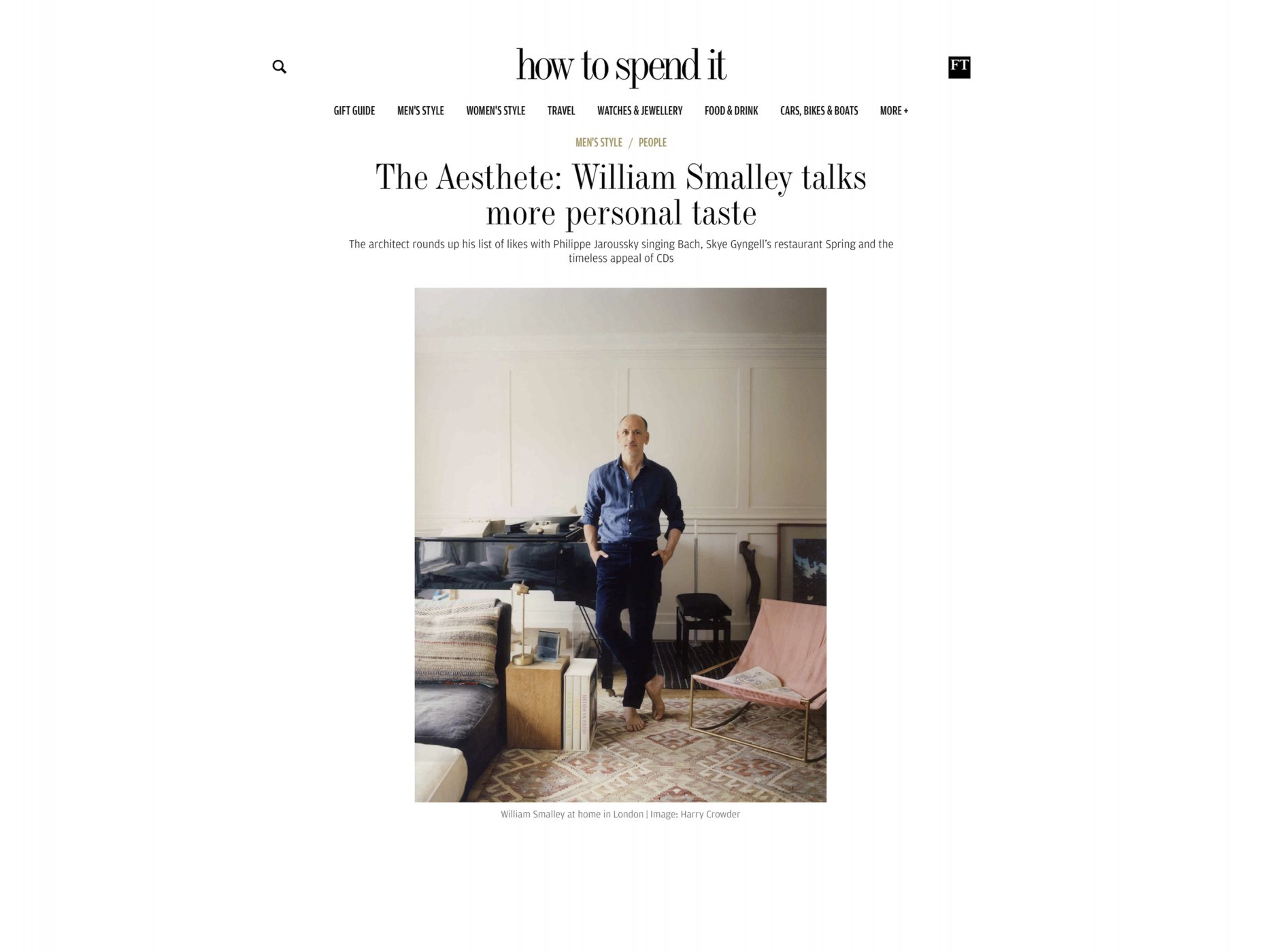 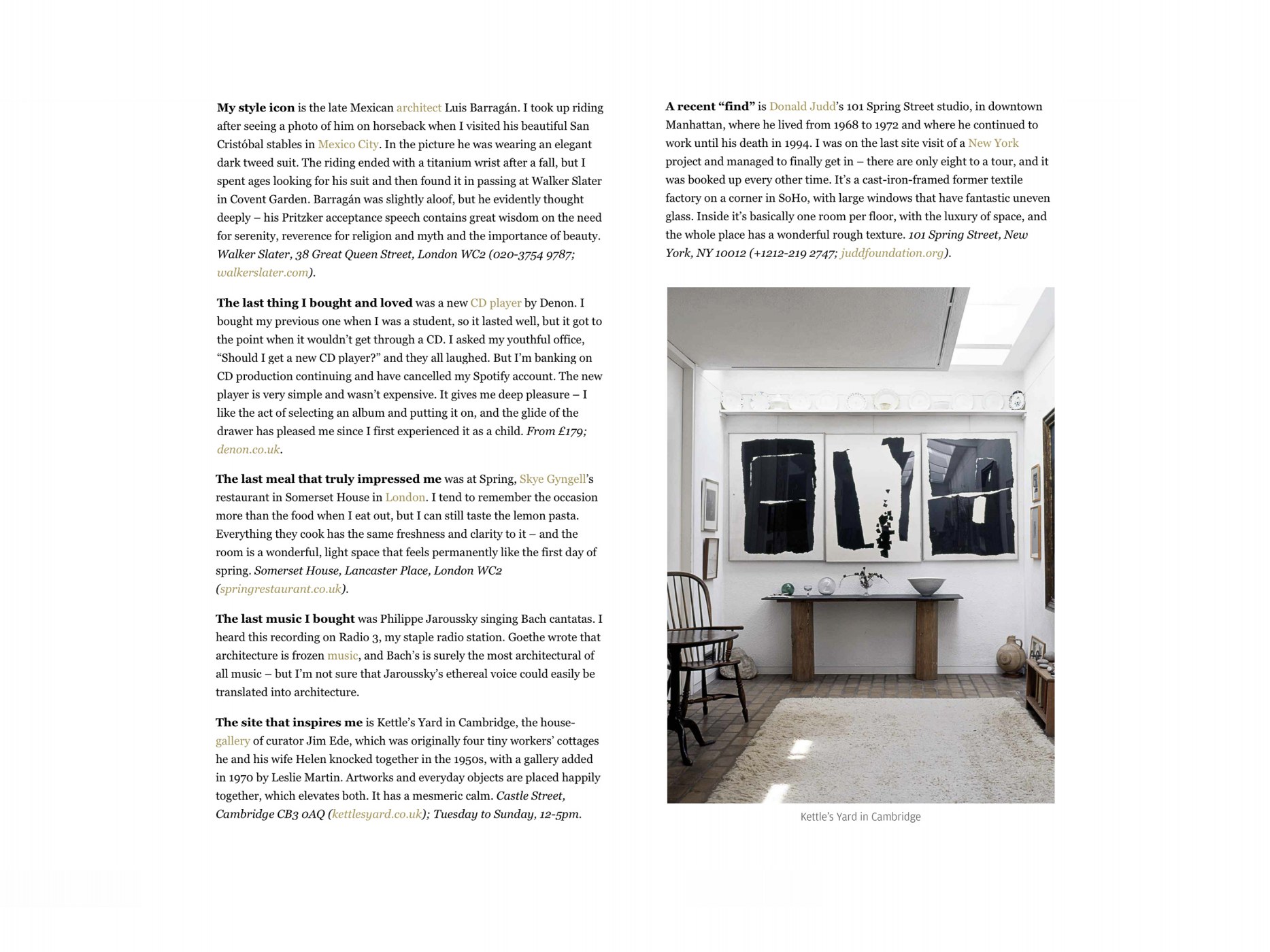 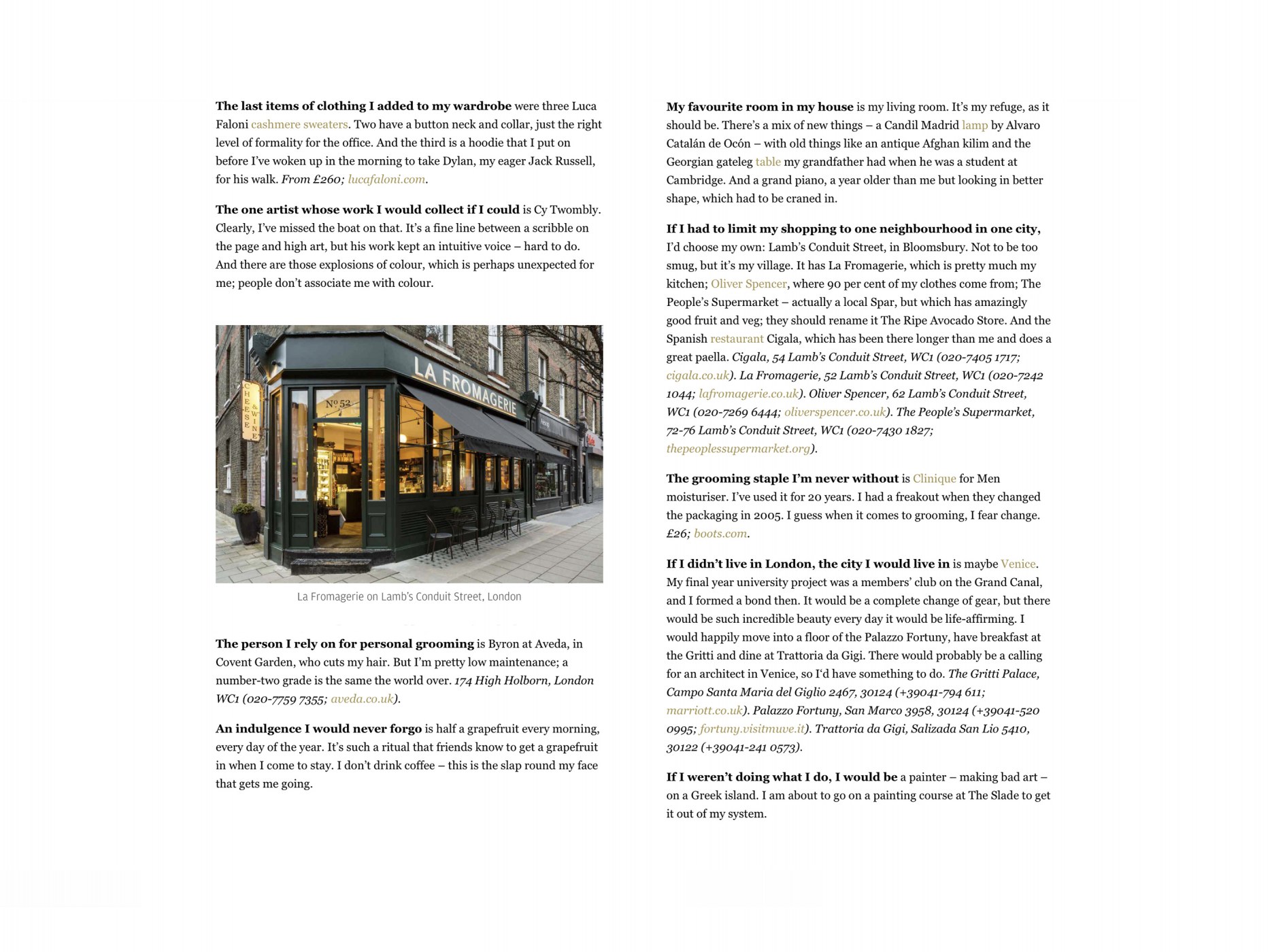 How to Spend It

The Aesthete, Financial Times How to Spend It  6th July 2019

My personal style signifiers are linen shirts – from Oliver Spencer, Orlebar Brown, Frescobol Carioca, clothes stalls on Patmos… I wear them all year round; white or navy in summer, pale pink in winter. They make me feel I’m on holiday every day.

The thing I’ve got my eye on is a Solo chair by Belgian designer Muller van Severen. It has a slender white metal cube frame with a natural leather seat suspended from it. I don’t need it, and it doesn’t have anywhere to go, but it is so beautiful, in an edgy way, that I want it anyway.

An unforgettable place I’ve travelled to in the past year is The Secular Retreat, on top of a hill in South Hams on the Devon coast. It’s the latest – and I think last – house in Alain de Botton’s Living Architecture series of modern holiday houses. It’s Swiss architect Peter Zumthor’s first permanent building in the UK, offering the rare chance in this country to experience living in contemporary architecture. It’s built of layers of hand-rammed concrete that frame large sheets of glass, and although it’s very modern it has an elemental feel, like Stonehenge.

The best souvenir I’ve brought home is a traditional calligraphy brush and ink pot that I bought in Naito Shoten in Kyoto. Though neither of us spoke the other’s language, I managed to ask the sales assistant to paint the characters of three words: “stone”, “paper” and “home”. I videoed her calligraphy to copy later and sent them as postcards. We have “stone” placed amongst the stone samples in my office.

In my fridge you’ll always find Patum Peperium anchovy paste and Perrier-Jouët, bought for the label. Not much else – it’s definitely a bachelor’s fridge.

The books on my bedside table are Chalk, by Joshua Rivkin, a poet’s take on artist Cy Twombly’s life and work, and Less by Andrew Sean Greer, which won the Pulitzer prize for fiction last year. It started with such urgency I assumed it would tail off, but it hasn’t so far.

The best gift I’ve received recently is a Quinn jumper in charcoal cashmere from Egg. It’s oversized, very soft with a rollneck, and has no seams. It’s enveloping, like a cosy English manor house in jumper form—you lose yourself in it.

The best gift I’ve given recently was a trip to 7132 Therme, the spa at Vals, in Switzerland, to my office. I normally go for my birthday in January to reflect on life – its stone walls are a good for that – but as the others in the office hadn’t been, this year we all went. I think they were suitably awed.

An object I would never part with is my fórcola – the oarlock of a Venetian gondola – from the workshop of Saverio Pastor in Venice. It’s surprisingly long and carved from a single block of walnut. Mine was beaten up and in the spare-wood bin – it’s 35 years old and Pastor knew the gondolier he made it for then. It has an incredible sculptural quality, like a Brancusi or Hepworth.

My favorite websites are probably car ones to feed my childhood car obsession – I configure cars on Porsche.com and Bentleymotors.com in the night when I can’t sleep. And I visit EngelVölkers.com to keep the house-in-Italy dream alive.

My style icon is the late Mexican architect Luis Barragán. I took up riding after seeing a photo of him on horseback when I visited his beautiful San Cristóbal stables in Mexico City. In the picture he was wearing an elegant dark tweed suit. The riding ended with a titanium wrist after a fall, but I spent ages looking for his suit and then found it in passing at Walker Slater in Covent Garden. Barragán was slightly aloof, but he evidently thought deeply – his Pritzker acceptance speech contains great wisdom on the need for serenity, reverence for religion and myth and the importance of beauty.

The last thing I bought and loved was a new CD player by Denon. I bought my previous one when I was a student, so it lasted well, but it got to the point when it wouldn’t get through a CD. I asked my youthful office, “Should I get a new CD player?” and they all laughed. But I’m banking on CD production continuing and have cancelled my Spotify account. The new player is very simple and wasn’t expensive. It gives me deep pleasure – I like the act of selecting an album and putting it on, and the glide of the drawer has pleased me since I first experienced it as a child.

The last meal that truly impressed me was at Spring, Skye Gyngell’s restaurant in Somerset House in London. I tend to remember the occasion more than the food when I eat out, but I can still taste the lemon pasta. Everything they cook has the same freshness and clarity to it – and the room is a wonderful, light space that feels permanently like the first day of spring.

The last music I bought was Philippe Jaroussky singing Bach cantatas. I heard this recording on Radio 3, my staple radio station. Goethe wrote that architecture is frozen music, and Bach’s is surely the most architectural of all music – but I’m not sure that Jaroussky’s ethereal voice could easily be translated into architecture.

The site that inspires me is Kettle’s Yard in Cambridge, the house-gallery of curator Jim Ede, which was originally four tiny workers’ cottages he and his wife Helen knocked together in the 1950s, with a gallery added in 1970 by Leslie Martin. Artworks and everyday objects are placed happily together, which elevates both. It has a mesmeric calm.

A recent “find” is Donald Judd’s 101 Spring Street studio, in downtown Manhattan, where he lived from 1968 to 1972 and where he continued to work until his death in 1994. I was on the last site visit of a New York project and managed to finally get in – there are only eight to a tour, and it was booked up every other time. It’s a cast-iron-framed former textile factory on a corner in SoHo, with large windows that have fantastic uneven glass. Inside it’s basically one room per floor, with the luxury of space, and the whole place has a wonderful rough texture.

The last items of clothing I added to my wardrobe were three Luca Faloni cashmere sweaters. Two have a button neck and collar, just the right level of formality for the office. And the third is a hoodie that I put on before I’ve woken up in the morning to take Dylan, my eager Jack Russell, for his walk.

The one artist whose work I would collect if I could is Cy Twombly. Clearly, I’ve missed the boat on that. It’s a fine line between a scribble on the page and high art, but his work kept an intuitive voice – hard to do. And there are those explosions of colour, which is perhaps unexpected for me; people don’t associate me with colour.

The person I rely on for personal grooming is Byron at Aveda, in Covent Garden, who cuts my hair. But I’m pretty low maintenance; a number-two grade is the same the world over.

An indulgence I would never forgo is half a grapefruit every morning, every day of the year. It’s such a ritual that friends know to get a grapefruit in when I come to stay. I don’t drink coffee – this is the slap round my face that gets me going.

My favourite room in my house is my living room. It’s my refuge, as it should be. There’s a mix of new things – a Candil Madrid lamp by Alvaro Catalán de Ocón – with old things like an antique Afghan kilim and the Georgian gateleg table my grandfather had when he was a student at Cambridge. And a grand piano, a year older than me but looking in better shape, which had to be craned in.

If I had to limit my shopping to one neighbourhood in one city, I’d choose my own: Lamb’s Conduit Street, in Bloomsbury. Not to be too smug, but it’s my village. It has La Fromagerie, which is pretty much my kitchen; Oliver Spencer, where 90 per cent of my clothes come from; The People’s Supermarket – actually a local Spar, but which has amazingly good fruit and veg; they should rename it The Ripe Avocado Store. And the Spanish restaurant Cigala, which has been there longer than me and does a great paella.

The grooming staple I’m never without is Clinique for Men moisturiser. I’ve used it for 20 years. I had a freakout when they changed the packaging in 2005. I guess when it comes to grooming, I fear change.

If I didn’t live in London, the city I would live in is maybe Venice. My final year university project was a members’ club on the Grand Canal, and I formed a bond then. It would be a complete change of gear, but there would be such incredible beauty every day it would be life-affirming. I would happily move into a floor of the Palazzo Fortuny, have breakfast at the Gritti and dine at Trattoria da Gigi. There would probably be a calling for an architect in Venice, so I‘d have something to do.

If I weren’t doing what I do, I would be a painter – making bad art – on a Greek island. I am about to go on a painting course at The Slade to get it out of my system.