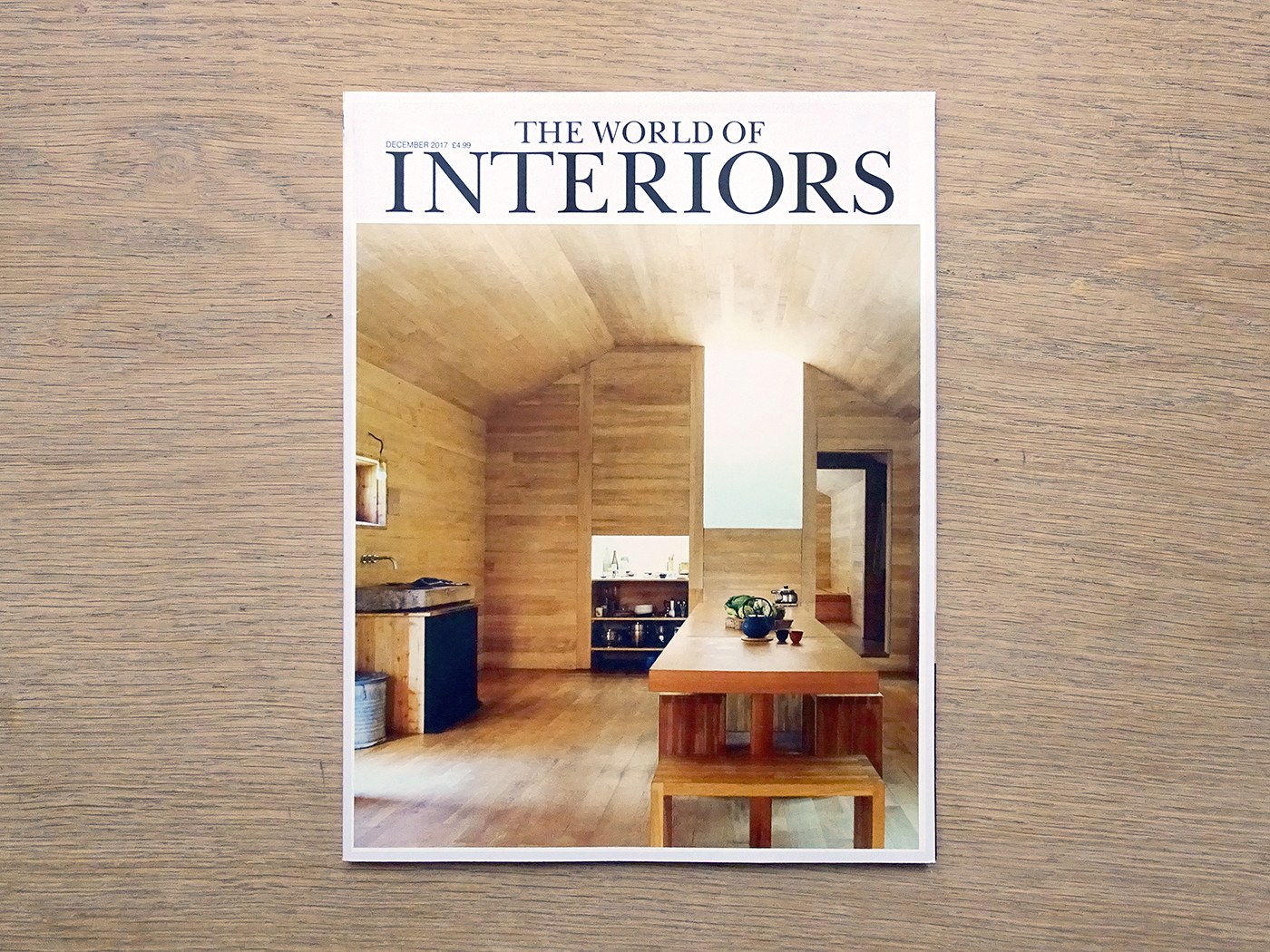 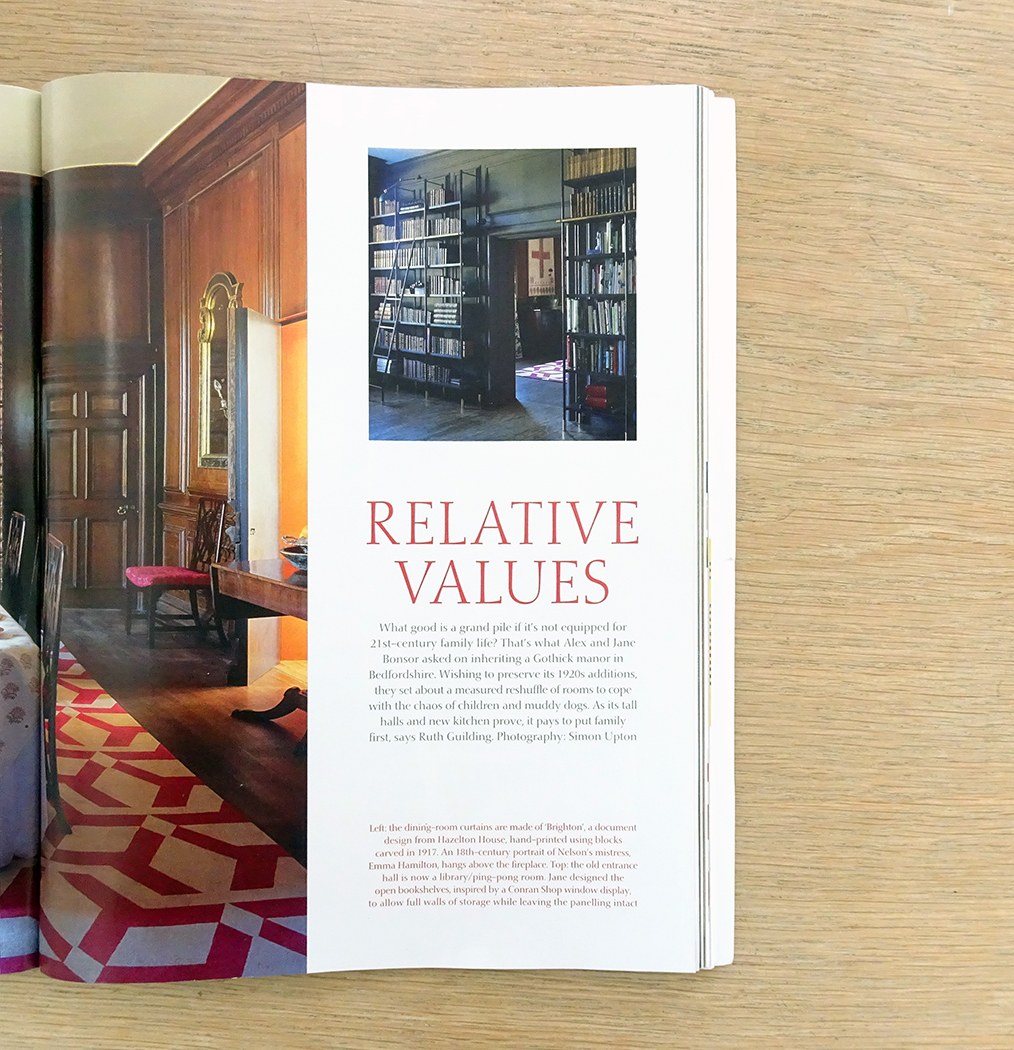 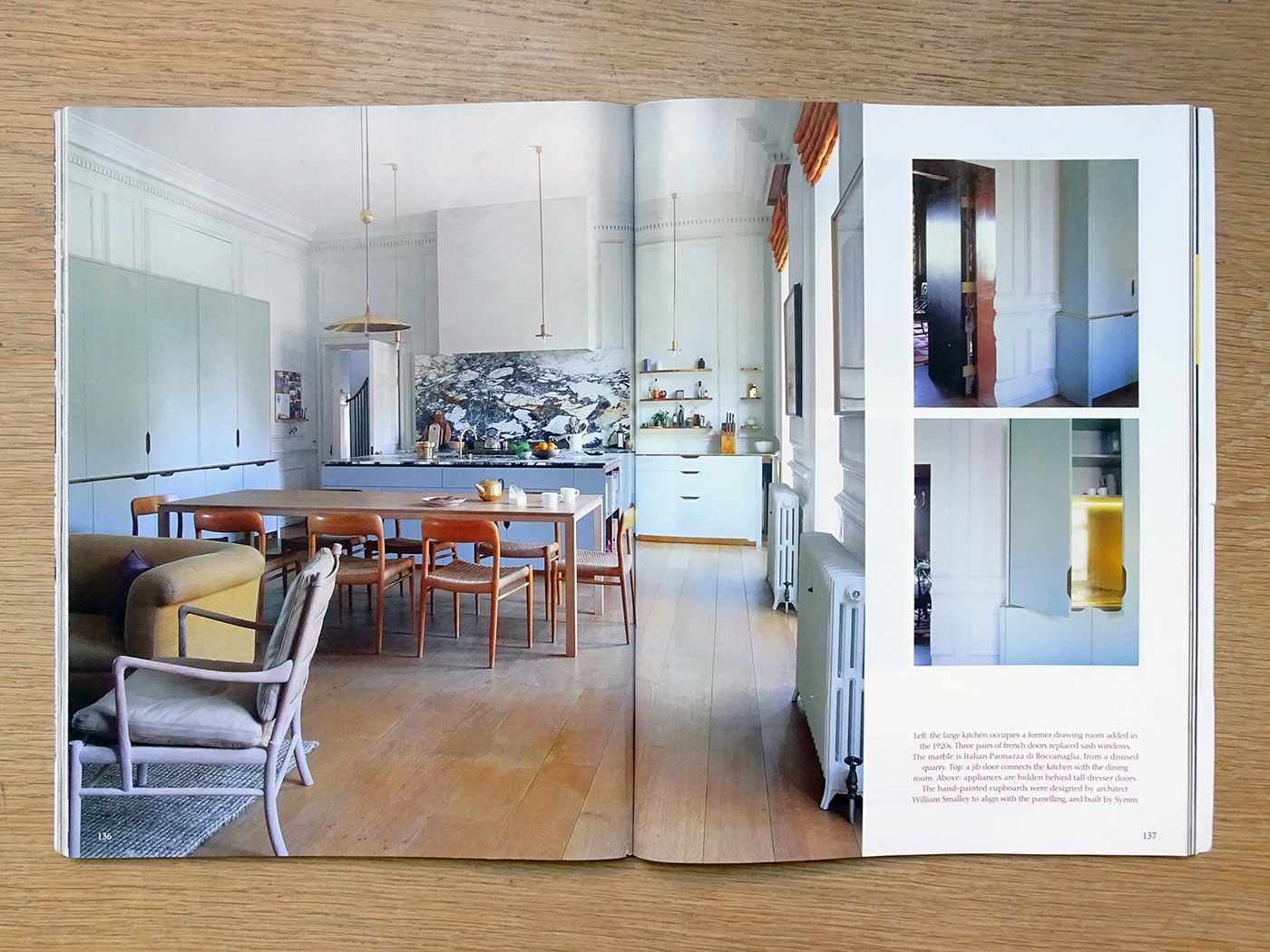 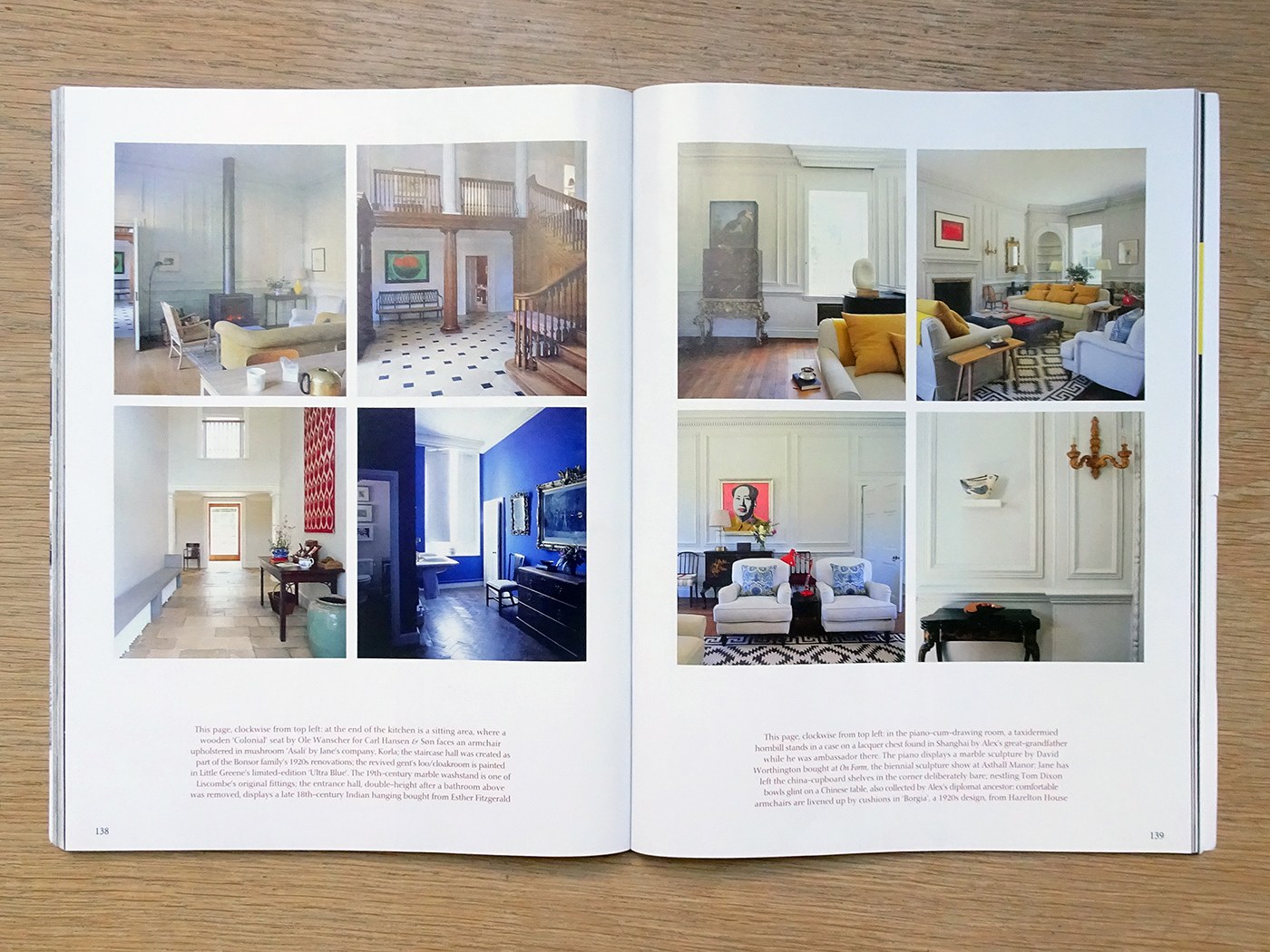 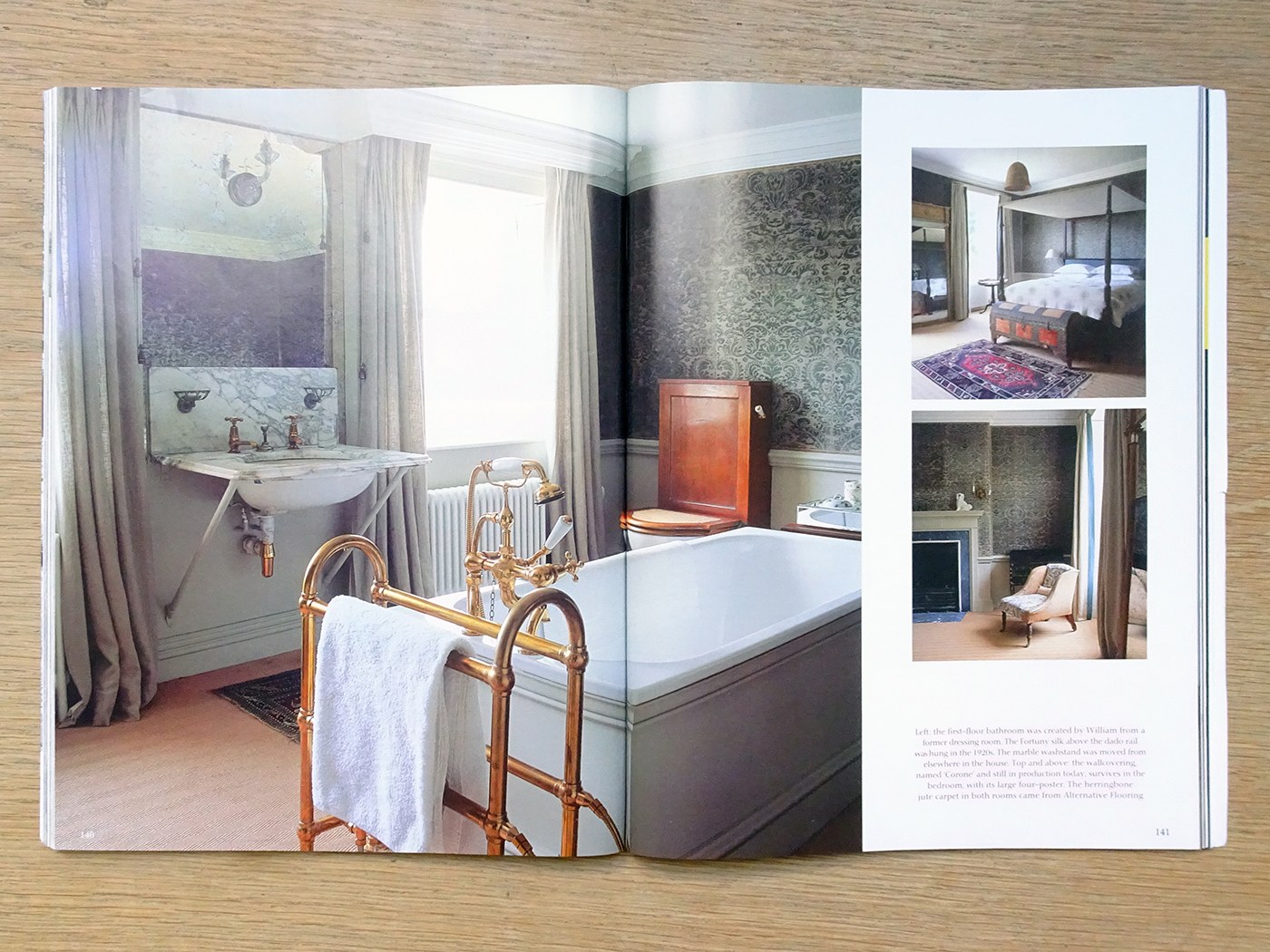 The building history of Buckinghamshire’s Liscombe House is typical of so many minor country houses: a ribbon facade in the castellated Gothick style aggrandising an older Elizabethan manor house in the 1760s, covered by a shell of stucco that has since been scraped back to expose weathered red bricks. With the arrival of the Bonsor family in the 1920s came an injection of capital, resulting in some glamorous interior decoration and the building of bathrooms, as well as a new staircase hall and double-height drawing room. But the bones of the old house, its straggling layout and warren of rooms connected by dog-leg corridors, were pretty much left as found.

Alex Bonsor and his wife, Jane, returned from a decade in East Asia to make their family home here in 2014. There were ‘about five drawing rooms and a kitchen a hundred metres away from the dining room’. After interviewing several architects, they settled on William Smalley (WoI Dec 2014). ‘William just got it. He understood the beauty of the building and immediately started talking about it in a big-picture way,’ says Jane. The first part of his brief was to build a new ‘dower house’ for Alex’s parents, Sir Nicholas and Lady Bonsor, in the park. The second was to remake Liscombe sympathetically as a functioning modern house focused on the main stair and courtyard, one that was more domestically suited to the ‘muddiness of dogs’ and the ‘chaos of family life’.

‘The money here was spent on architecture and landscape advice; hard things, not soft furnishings,’ Jane explains. But once the thought process was established, ‘William took that on and produced a nice intellectual justification of things.’ The first thing he did was to advise them to bring in the landscape architect Kim Wilkie, who made a thorough overview and appraisal of the park. Wilkie’s key advice was to move the front door from the exposed north front to the west wing, where the semi-enclosed quadrangle court was rehabilitated as a green room annexed to this new domestic end of the house. With this rationale established, William created a double-height entrance hall behind the relocated front door by the simple expedient of removing the bathroom on the first storey above. English Heritage granted consent when its floor proved to be a 1920s concrete insertion, and once gone, a graceful vaulted space – almost certainly an earlier staircase hall – was revealed.

The walk-in panelled boot room and coat cupboard at the back of this new hall, lit by a full-length window, is the first of the many concessions to family life that William provided. Thanks to the entrance’s resiting, the current piano room is now a few steps to the right, the main staircase is to the left, and a new family kitchen fills the tall 1920s drawing room just to the rear. This is a truly Platonic ideal of the kitchen, demonstrating all the beautiful economy of design and thoughtful reticence that are the trademarks of William Smalley’s practice. The accoutrements of everyday use, coffee machine, fridge and so on, are all behind tall dresser-cupboard doors detailed in folded brass, so that the classical vocabulary of this Neo-Georgian room prevails unchallenged. A splashback slab of Italian marble hangs like an altarpiece, its raw surface answering to the patched weathered masonry of the 13th-century chapel seen through long windows across the court. More importantly, this room became a functioning circulation hub, with a glazed door on the green quadrangle outside, a newly built back stair to the rear and a fantastic jib door cut through the thickness and panelling of the next-door dining room wall, the final solution to a centuries-old problem of long corridors and cold dinners.

The rest of the changes to Liscombe were simpler ones: two Soaneian lantern windows, one lighting the back stairwell, the second on the bedroom spine corridor; the refitting of several bathrooms and creation of one spectacular new one for the master bedroom. The parties established a ‘red line’, taking a guest corridor and some service areas out of the project to protect the budget from an overspend. Client and architect collaborated over the choice of floor coverings (sisal), modern light fittings and simple unifying paint schemes that ‘calm things down’, although, says Jane: ‘I pushed them towards more colour and he pushed me towards more restraint’. There was a surplus of inherited antiques from which she chose sparingly, selecting lacquer furniture brought back by Alex’s great grandfather, who served as ambassador in Shanghai; a modernist leather-bound red lacquer desk that Jane’s father (the architect James Troughton) had made in the 1980s; and abstract paintings by her mother, Sarah Troughton, who was taught by Sean Scully.

Facing out into its parkland of railed fences and ancient stag-headed oaks, Liscombe has a settled period calm like so many English manor houses seen in the pages of interwar copies of Country Life. But inside, this new-made house exudes a kind of articulacy, a philosophical intelligence and beautiful coherence of colour, space, pattern and form that is quite unlike anything I have ever experienced.