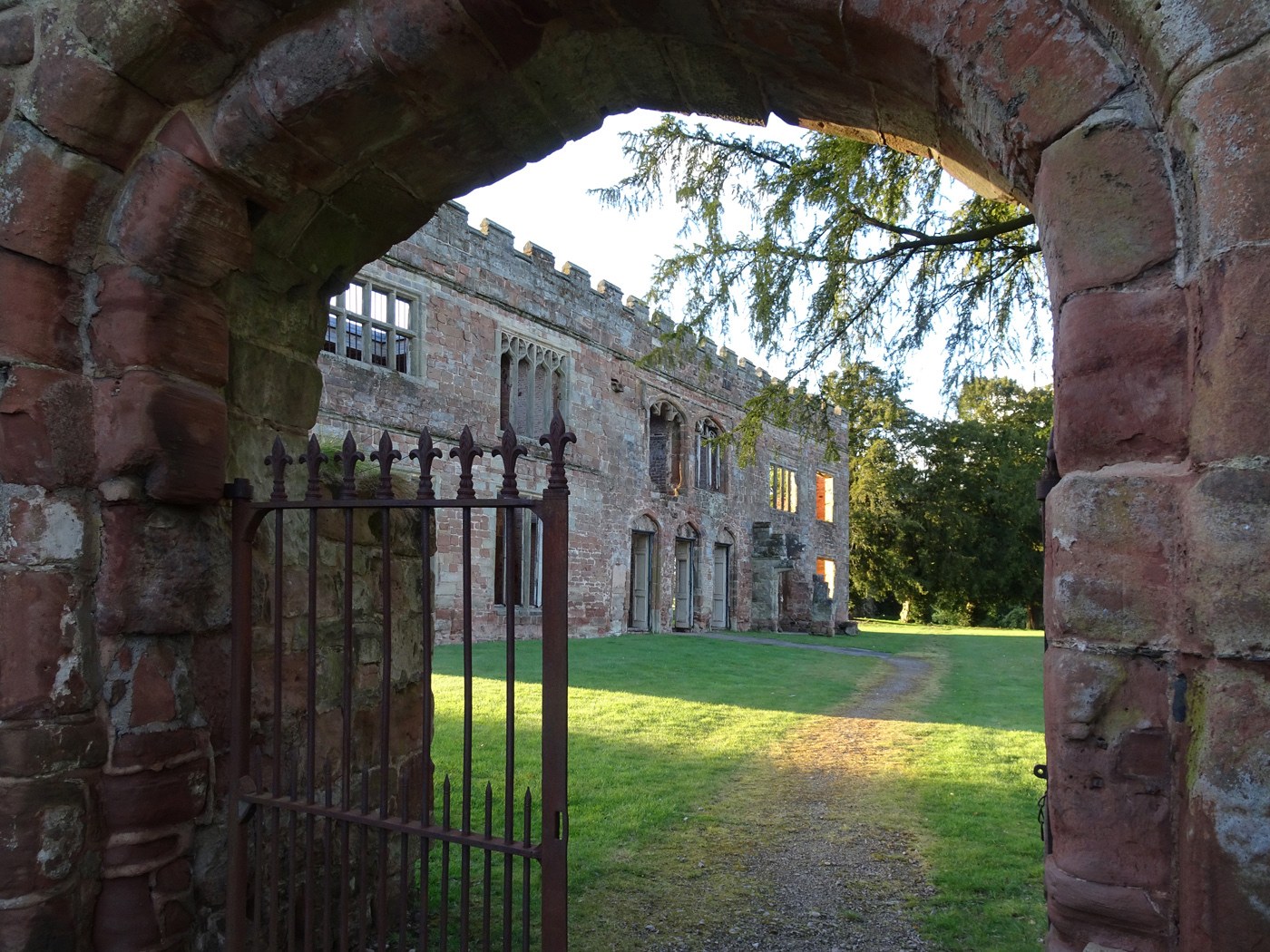 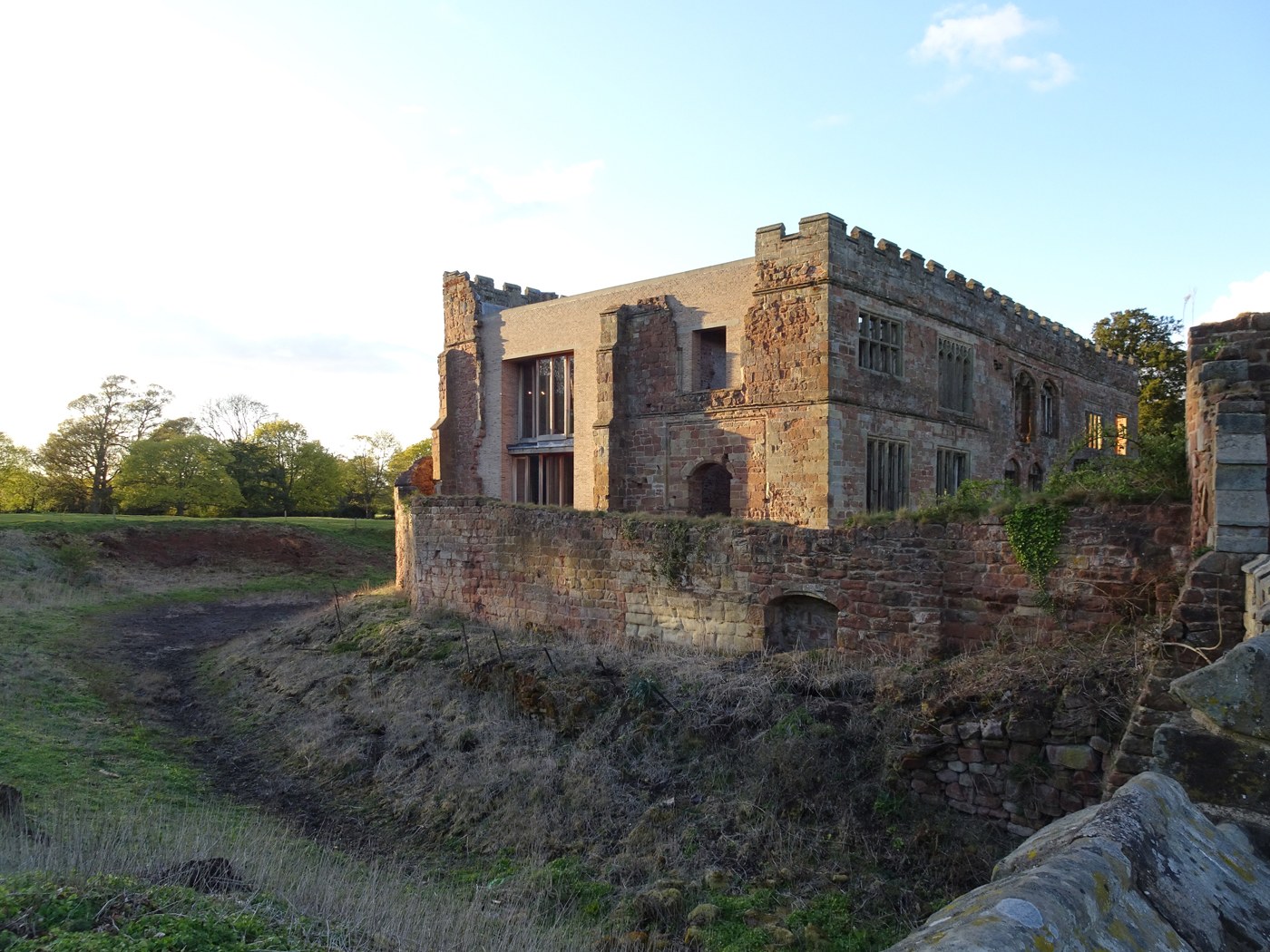 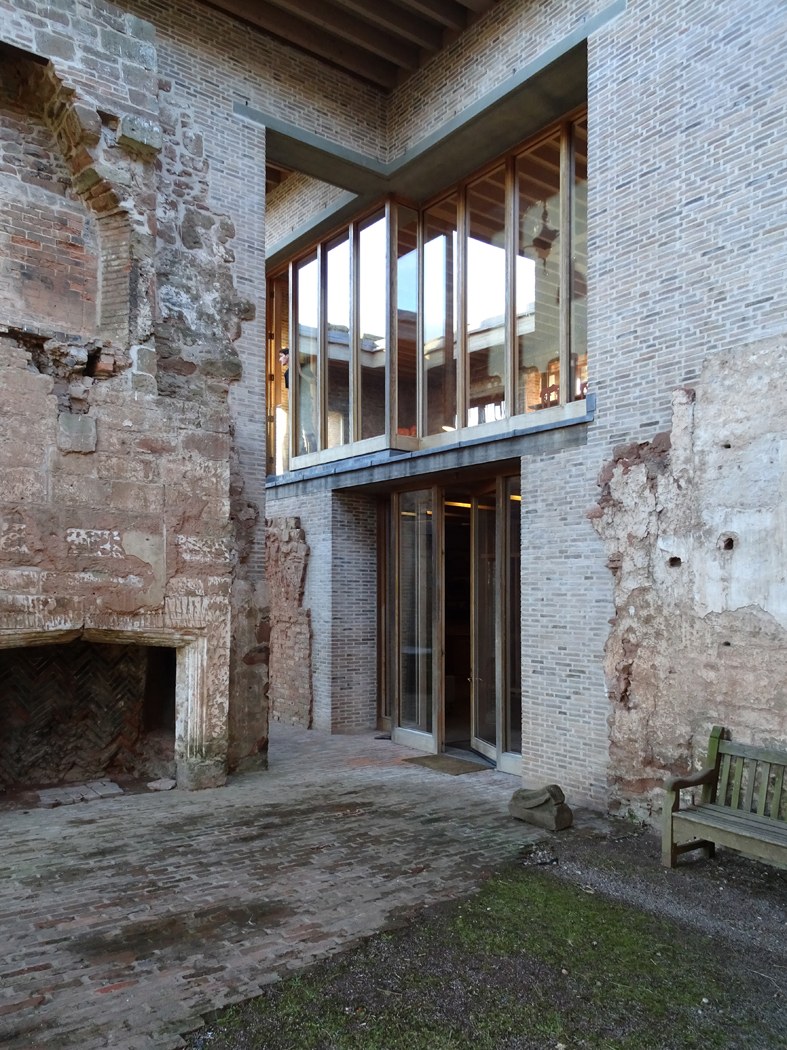 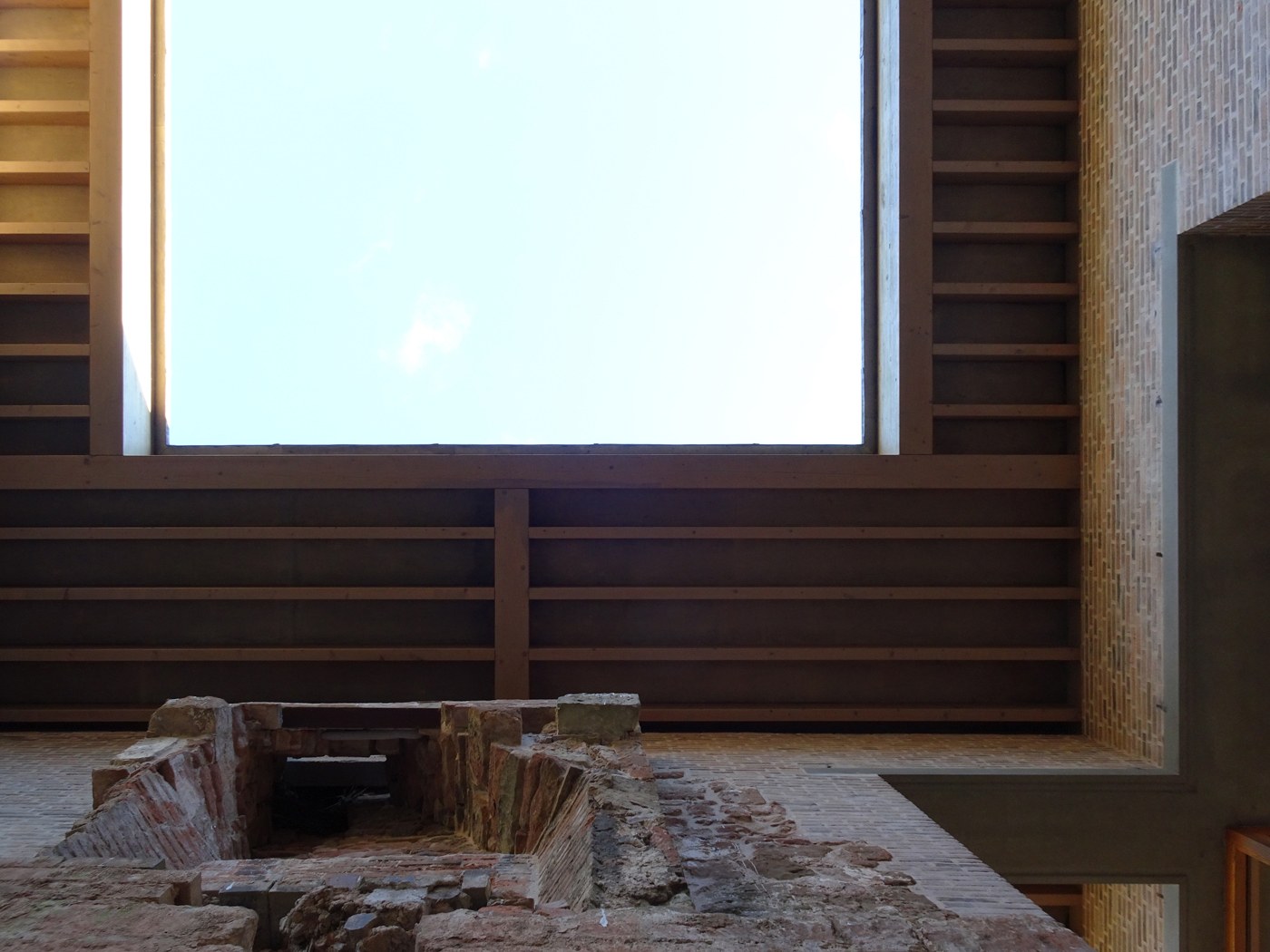 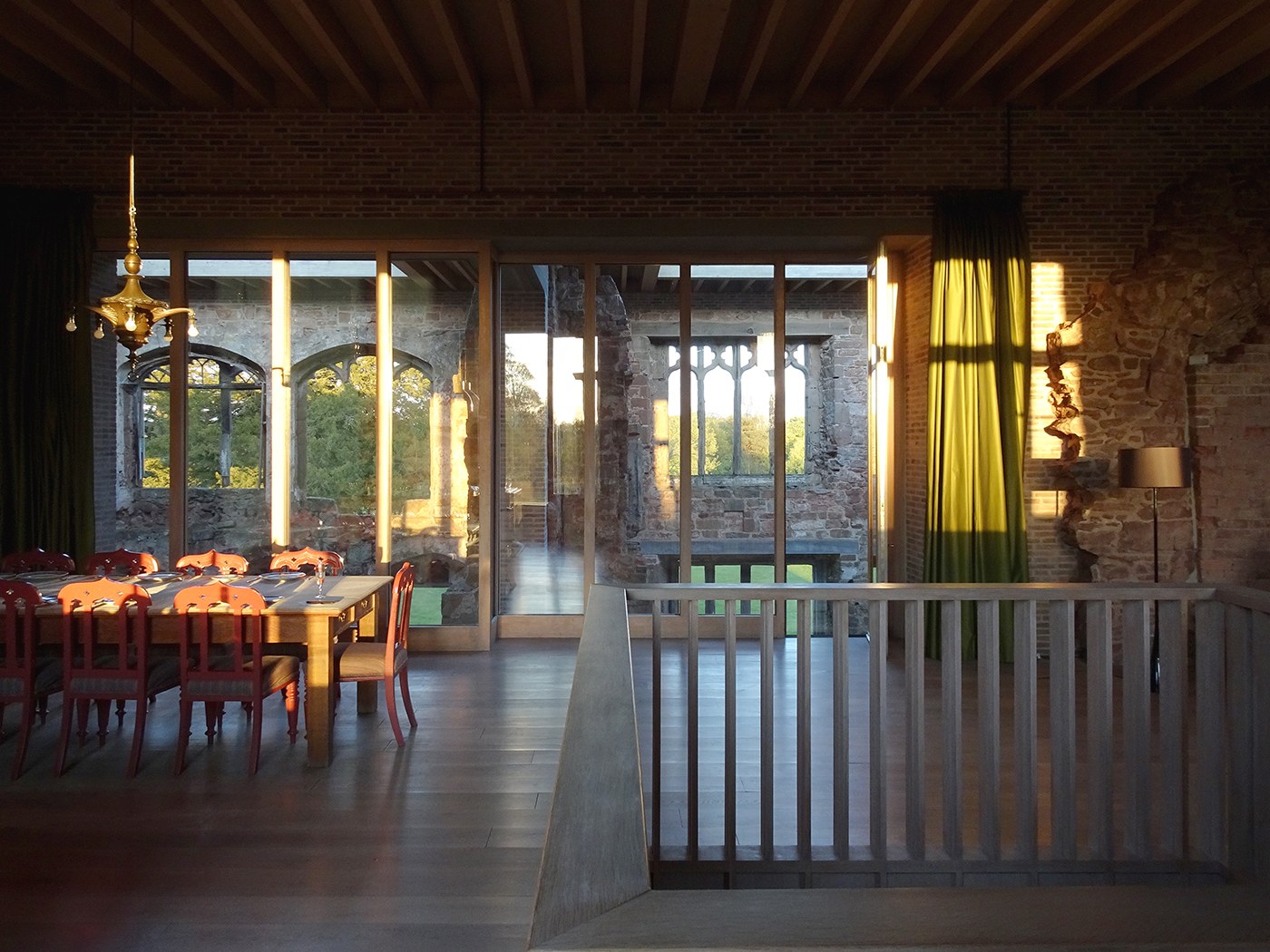 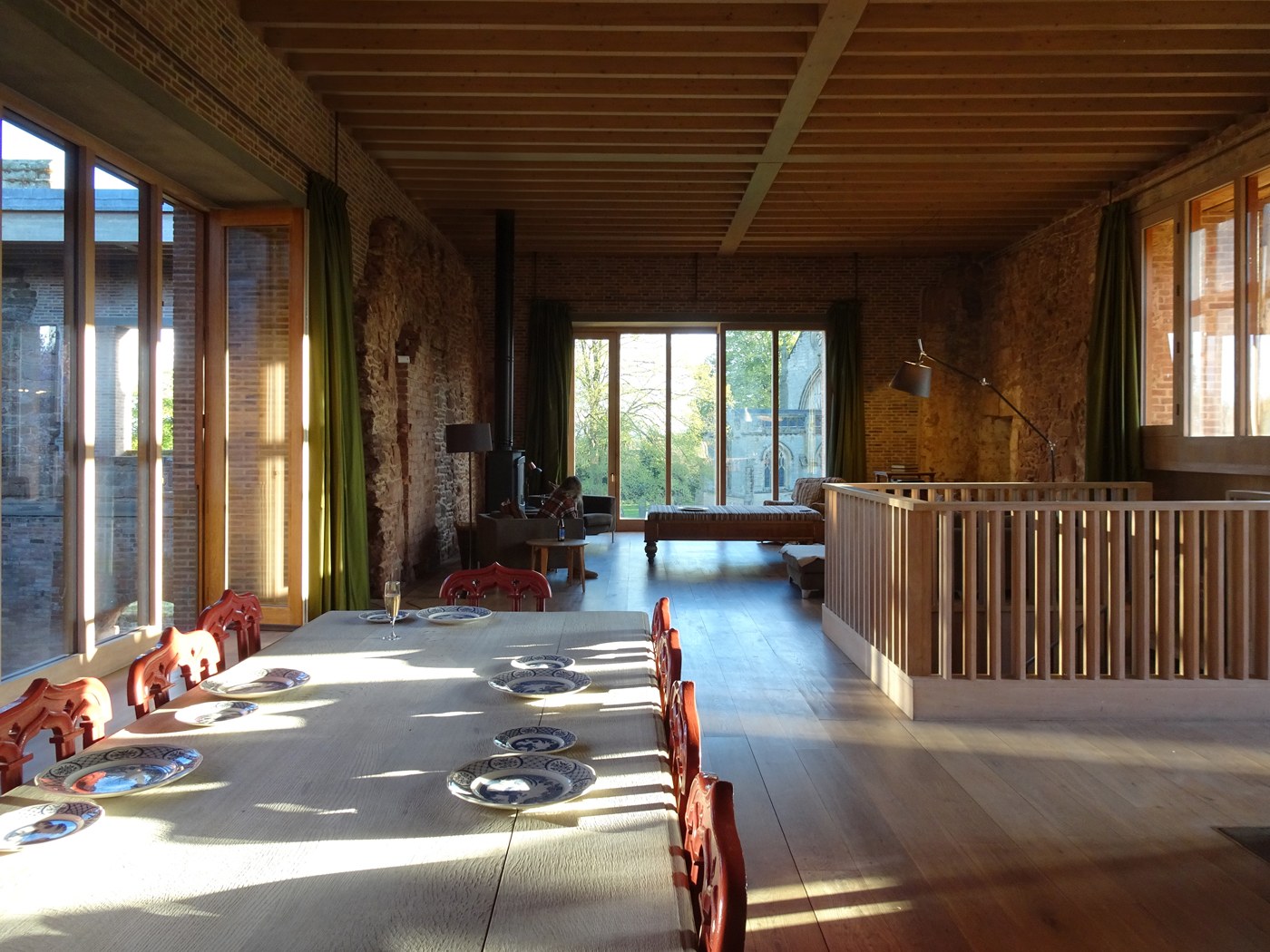 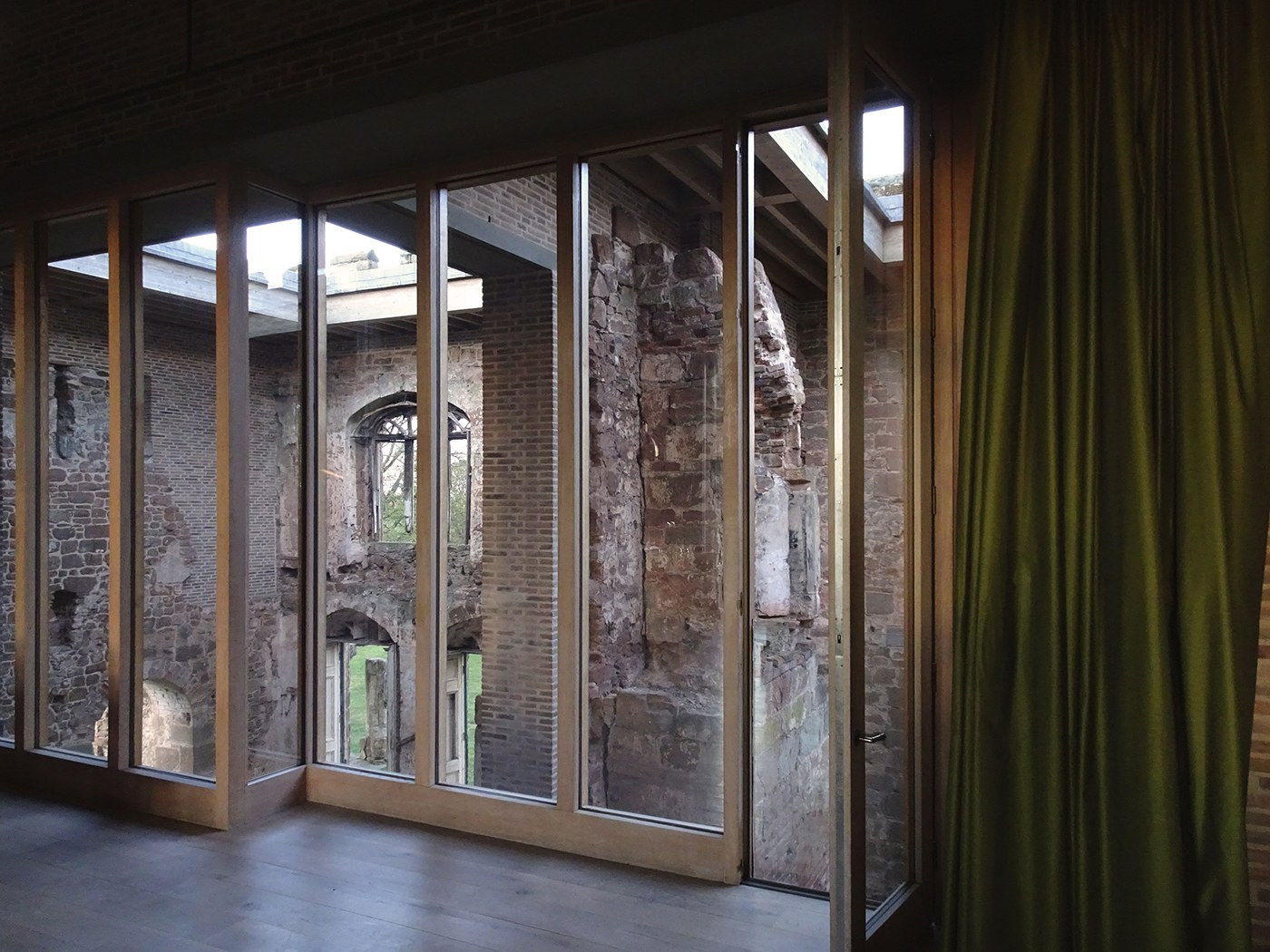 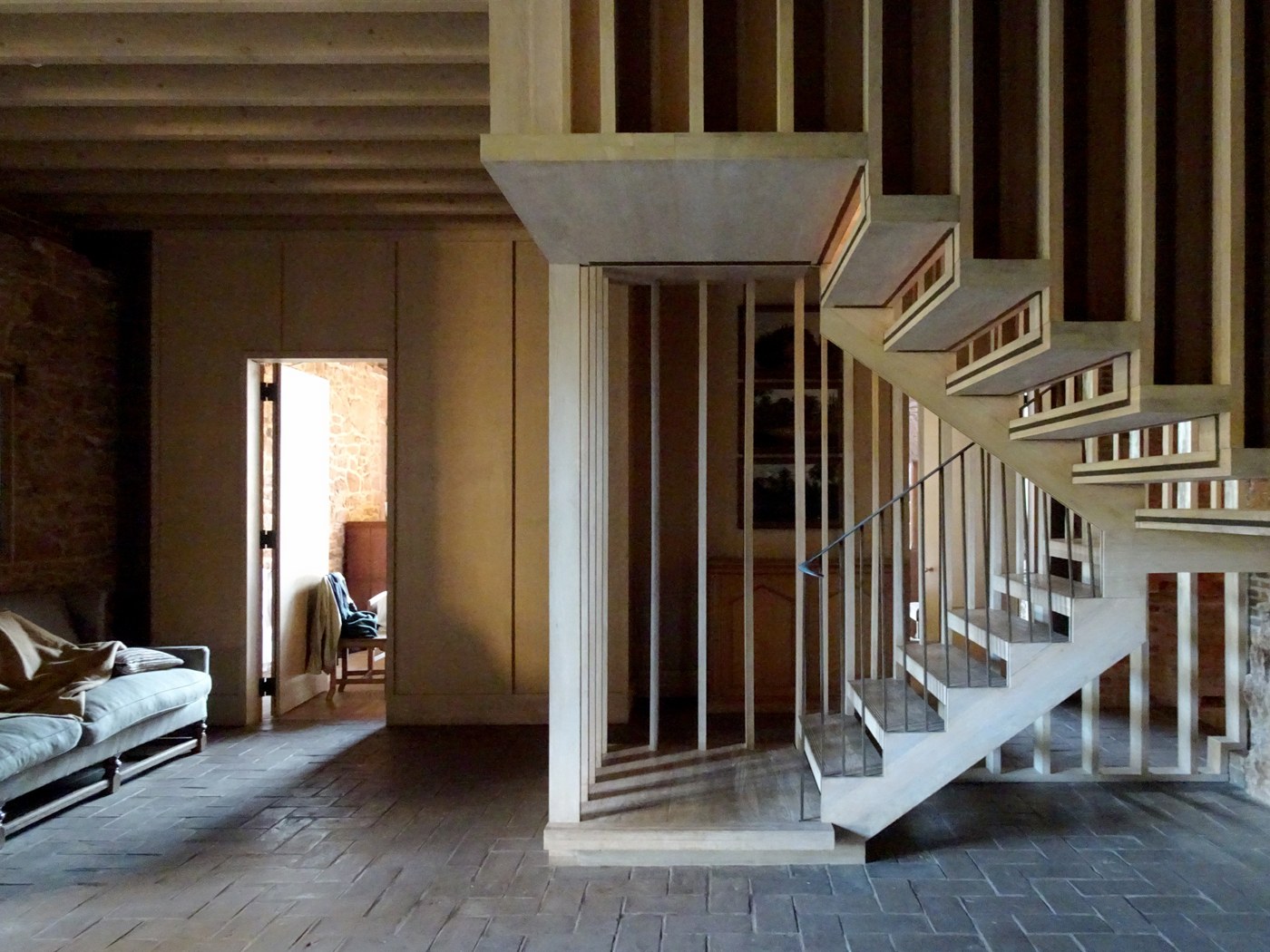 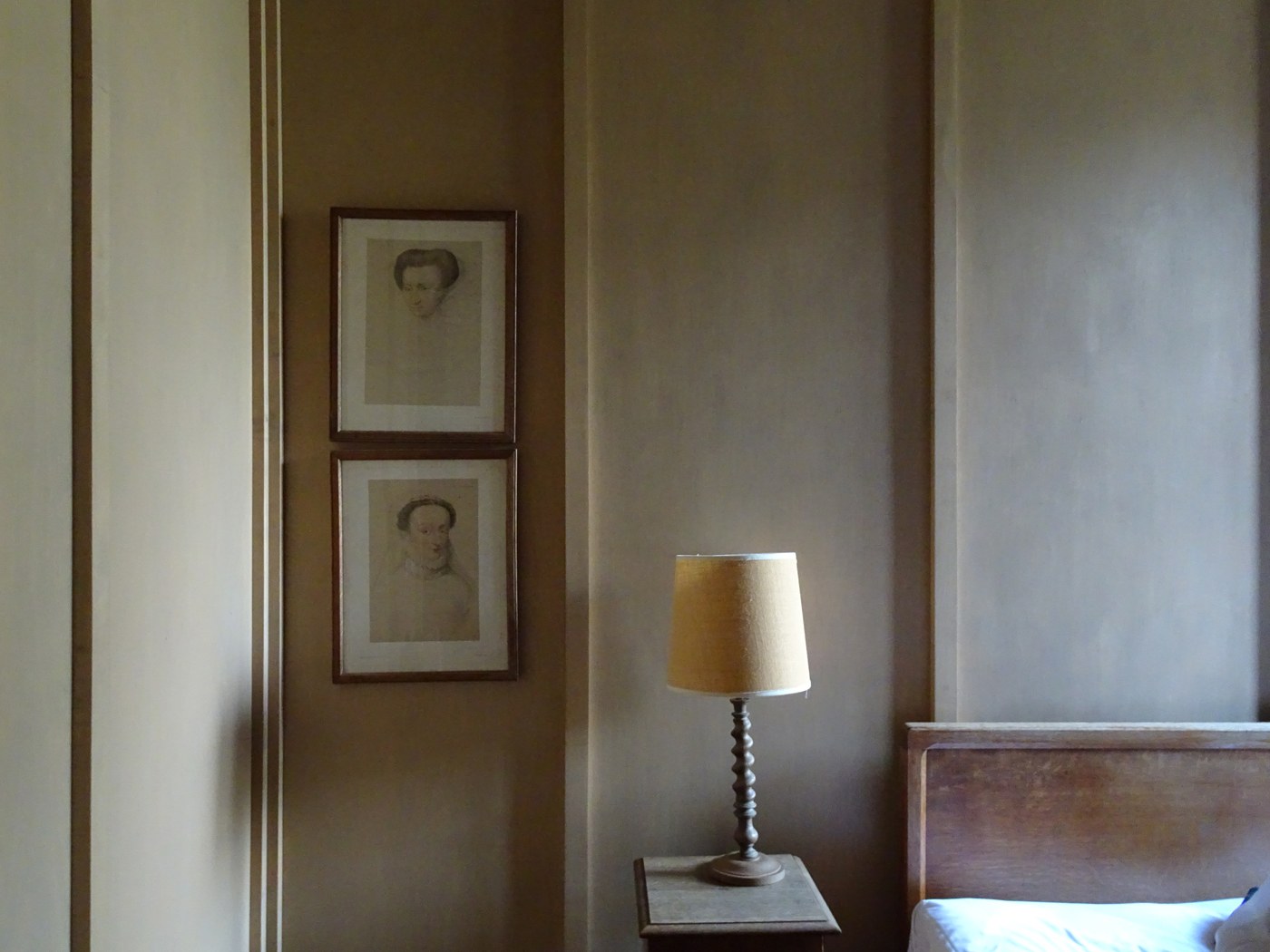 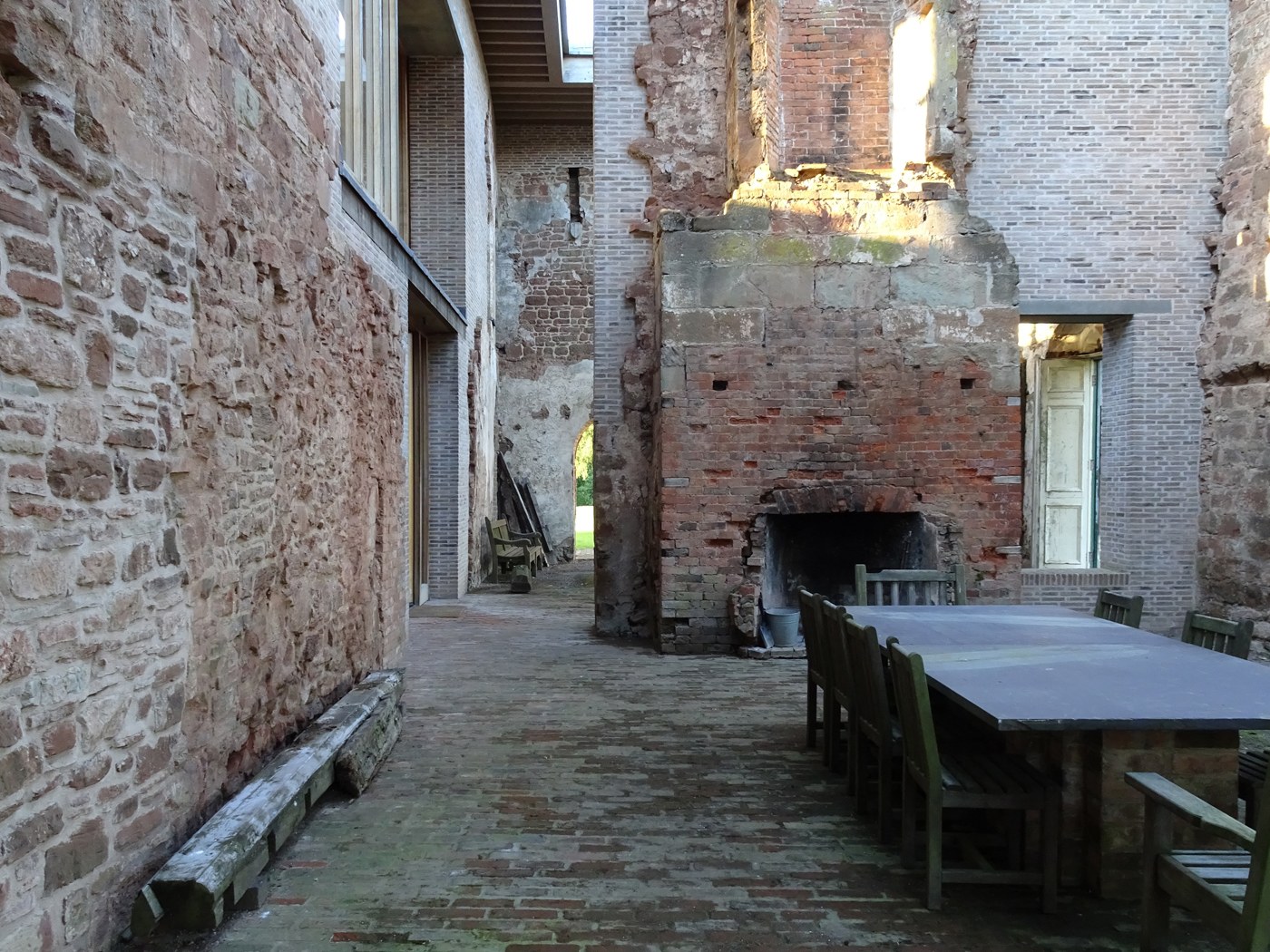 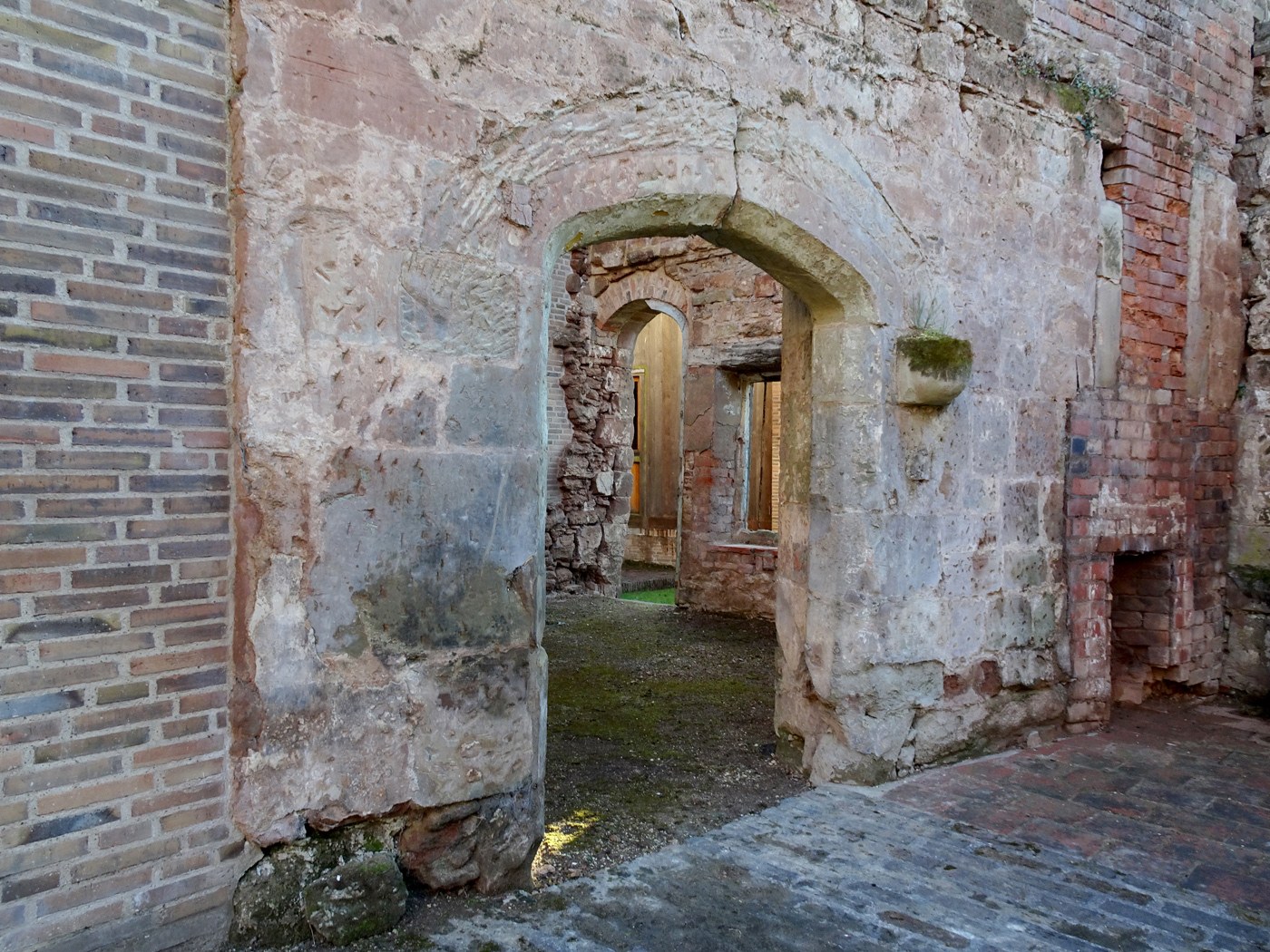 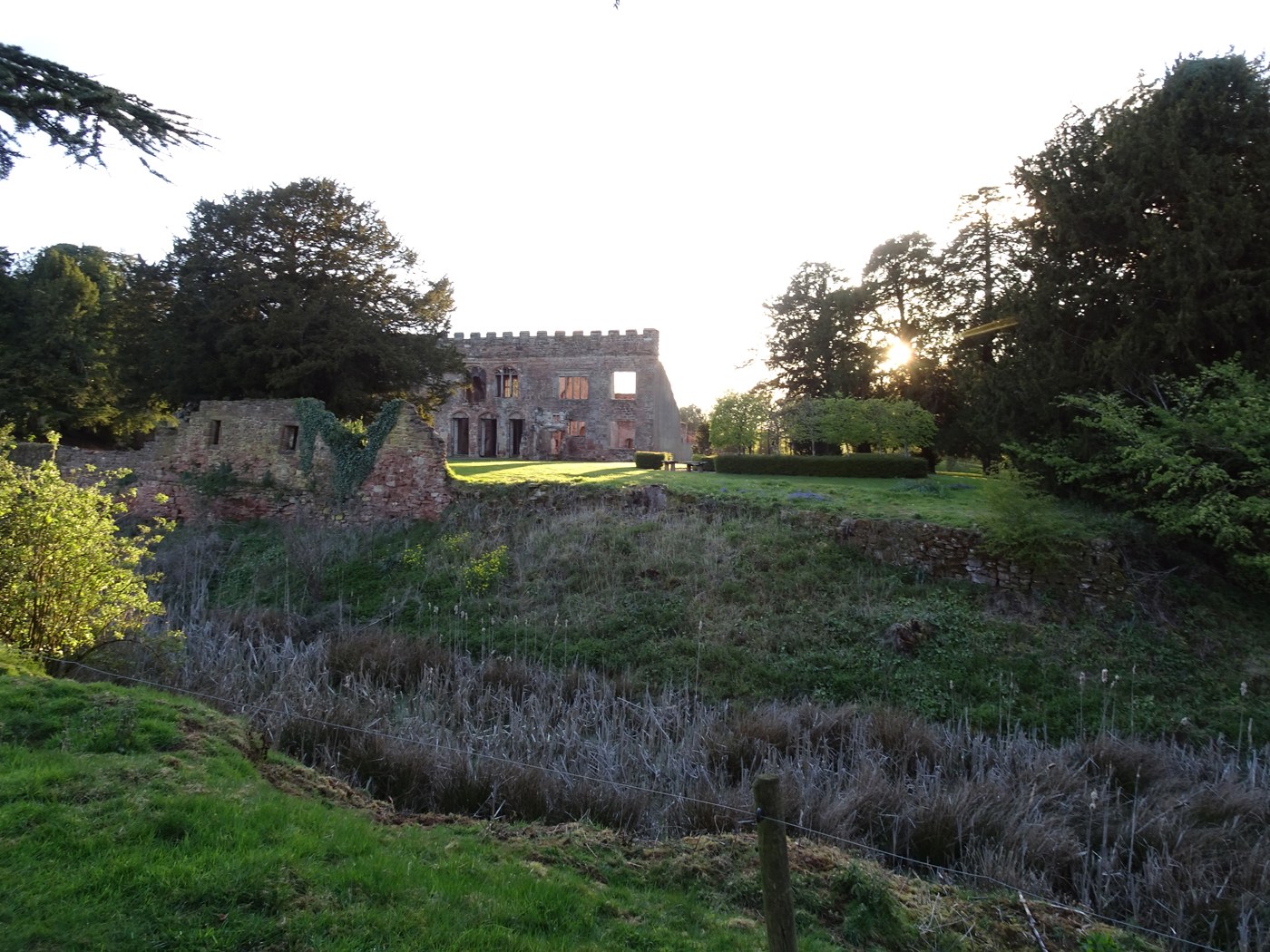 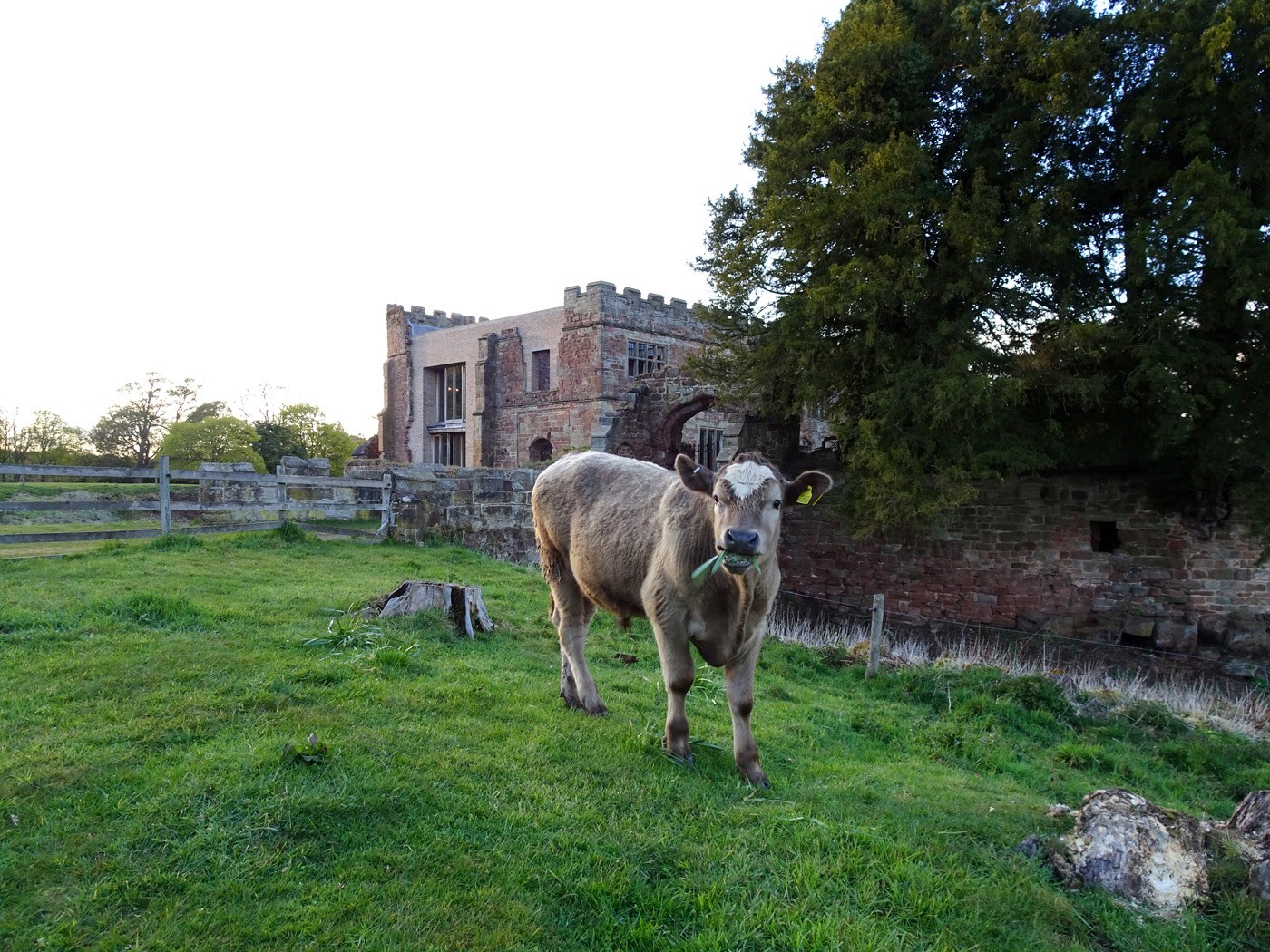 Arrival at the castle across the moat was full of anticipatory excitement, a remote office for a few days to think about some new projects. I hadn’t expected that the setting would be so beautiful: the wide encircling moat, the church next door with its gravestones marching out towards the lake, across a park kept tightly mown by a handsome herd of colour-appropriate cattle.

Inside, and upstairs, looking back to the church, the feeling was of inhabiting spaces that inhabit the original building, and of a particular stillness from the highly effective double glazing.

The wonderful, lofty upper living room, in the site of the Castle’s original hall, made me immediately think Why aren’t all weekend houses like this?, and also I want one. By contrast, the ground floor hall and bedrooms are introverted spaces, to the extent perhaps of being antisocial: there are dangerous steps hidden in dark recesses, and the doors to the bedrooms slam closed on unwelcomingly strong fireclosers. (As a result, the hallway lights needed to be kept on all day, with the sad green-tinged light of low energy bulbs, and so weren’t, and we kept falling down the stairs.)

Now an inhabited ruin, Astley Castle was a strange and eccentric house to start with, before the recent intervention, with a complicated past going back to the twelfth century. The front had a particularly English irregular formality; at the rear where it meets the moat it is troglodyte, with stones like giant molluscs. There is a photo of a vicar taking tea on the front lawn, but the castle was last in use in 1978 as a terrible-sounding restaurant, with a bar in every room, that burnt down in dubious circumstances within an hour of it closing up, and until the Landmark Trust took on the burden of renewal the building was empty and ruined. It still sort of is.

Chosen through a limited competition in 2006, with some truly strange fellow entries, it is hard to imagine a better outcome for the Landmark Trust and Astley than Witherford Watson Mann Architect’s winning intervention – so integrated with the ruins it is not quite a building in its own right. It is masterly, and economical, of intellectual depth and consistent rigour. Despite its small scale it won the Stirling Prize in 2013. It had me wondering about the nature of genius and how three minds could combine to make something so clean and thorough in conception.

Witherford Watson Mann won by recognising the importance and opportunity of the collapsed centre of the castle, now where you enter the building proper, and glazed with full-height windows from which you look into and across the ruins of the original building, with the cattle wondering pastorally in and out of view beyond.

The consistency runs through every aspect of the execution. The apparently solid new brick walls which both stabilise the original structure and enclose the new spaces are actually a diaphragm of a single skin of (Danish) brick with an inner grid of clay blocks infilled with insulation. A glulam timber ceiling floats above tying it all together, with framed openings of sky over the ruined spaces. As in the ruins, finishes in the new spaces are exposed: dark brick-like floor and wall tiles, timber panelled partitions and ceilings, and windows framed in oak. Everything is on the right scale.

The spaces were magical, and fun to inhabit, but at moments, when the sun had gone in, there was a ghostly air, a sadness. Probably unintended, arguably appropriate, I don’t think it was just from inhabiting a ruin. It may have been the finishes – the oak floor upstairs has been given a lifeless coat of no doubt practical varnish, the timber structure a deadening green-grey stain; the exposed concrete lintels were pre-cast and acid-etched, so lacking the inherent chance and captured life of in-situ concrete; the new bricks and pointing err on the side of grey against the original earthen red stone. But, equally, maybe it came from within, and was just the effect of the release-from-lockdown two day hangover.