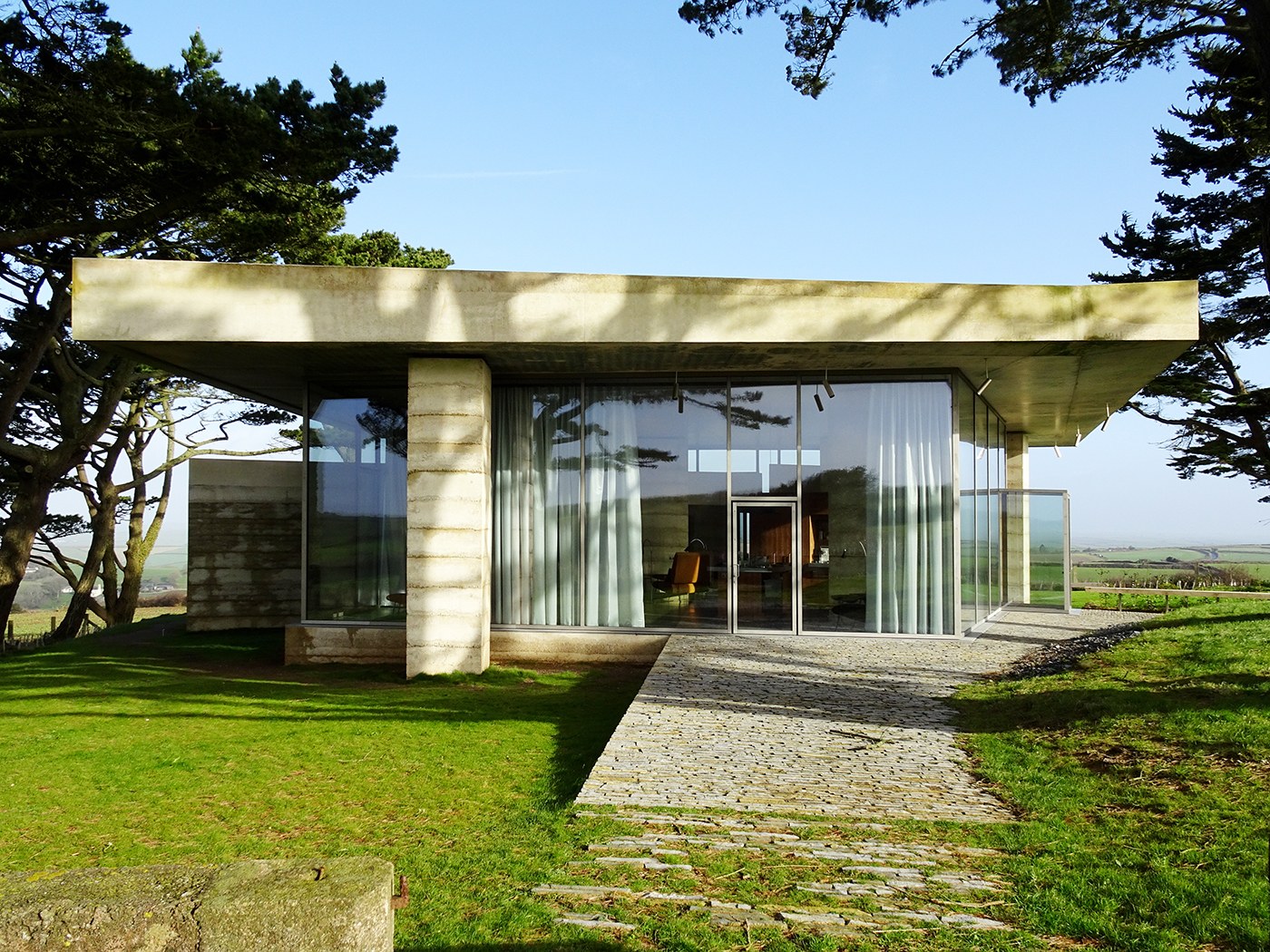 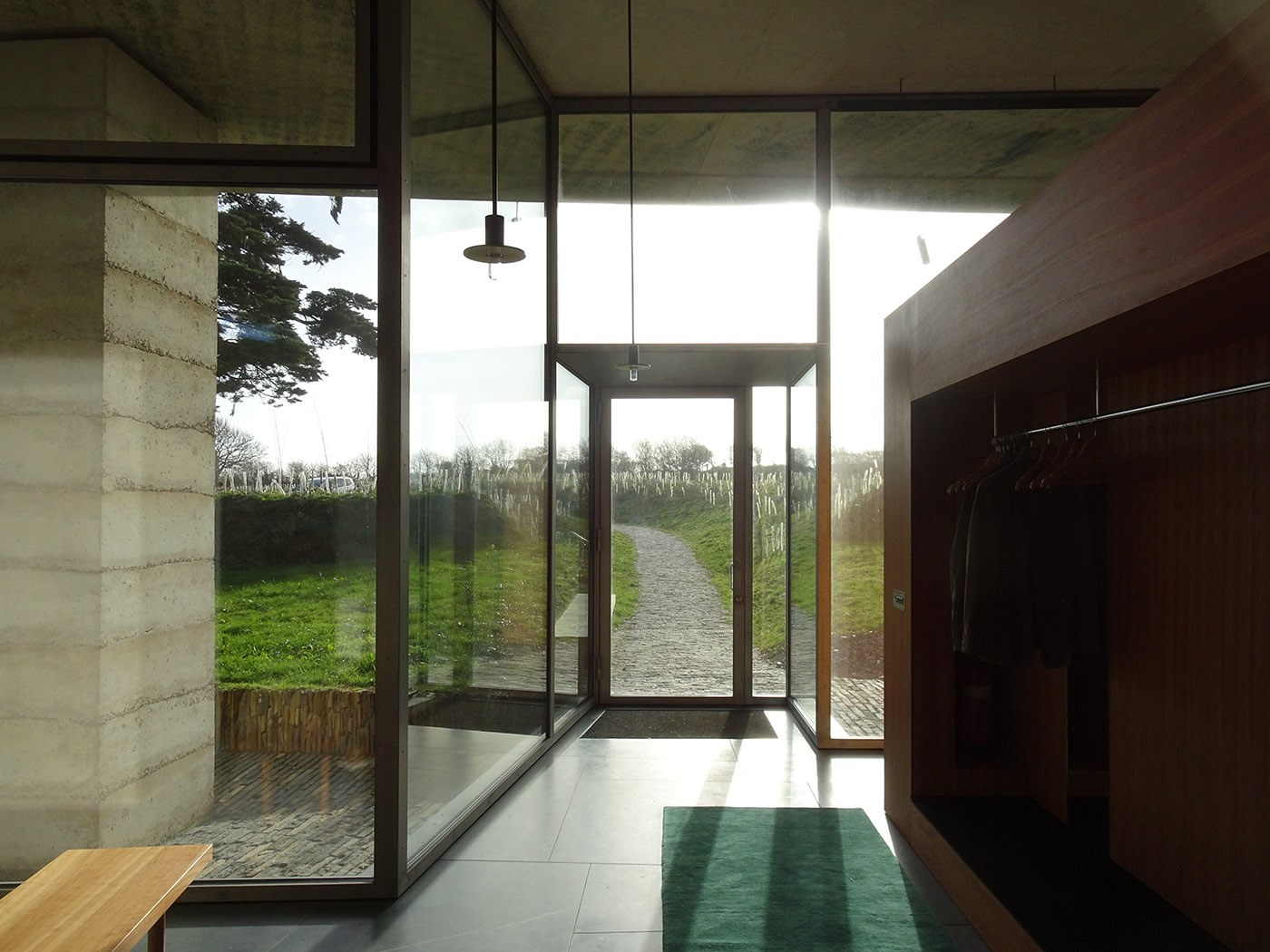 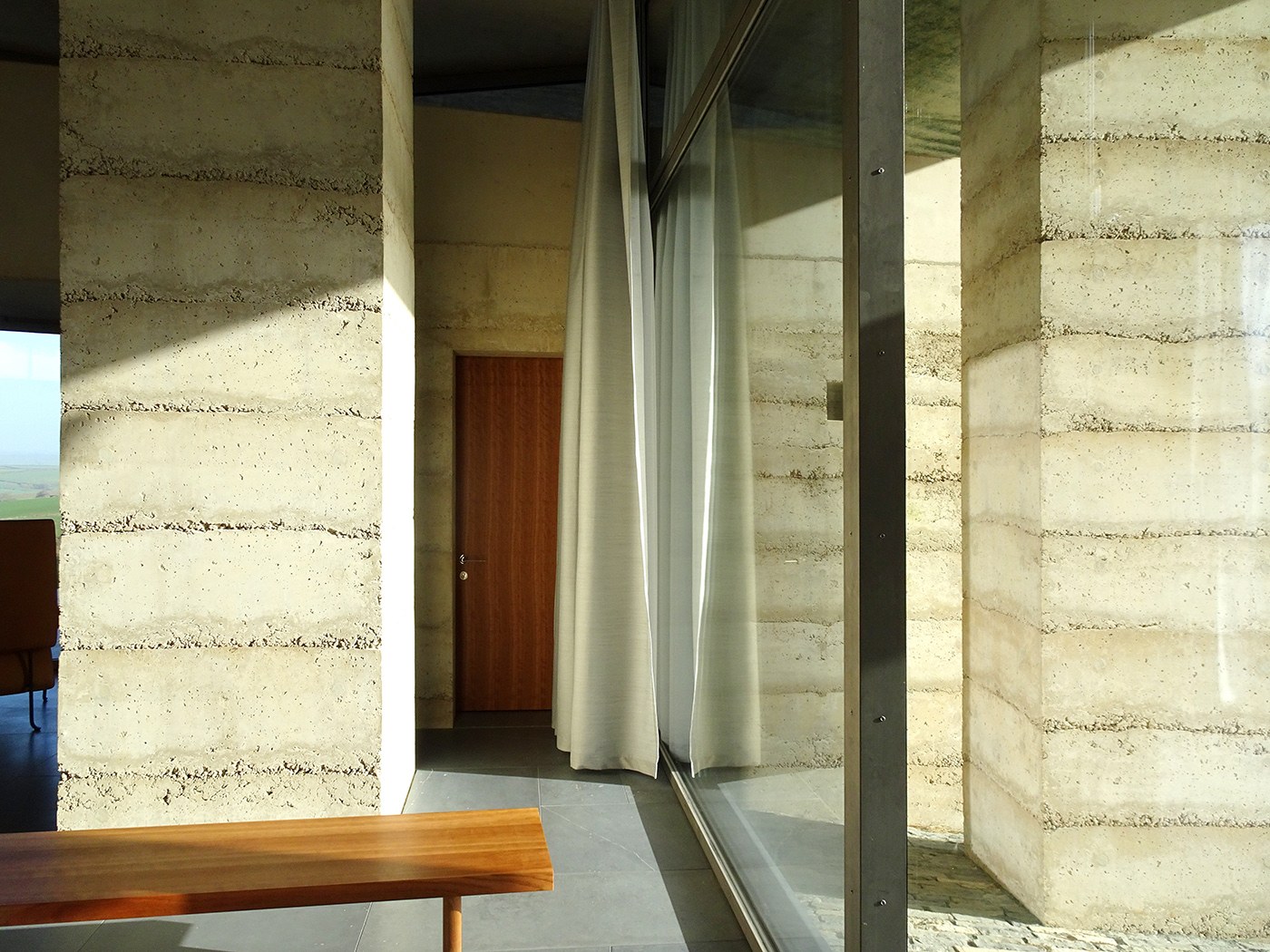 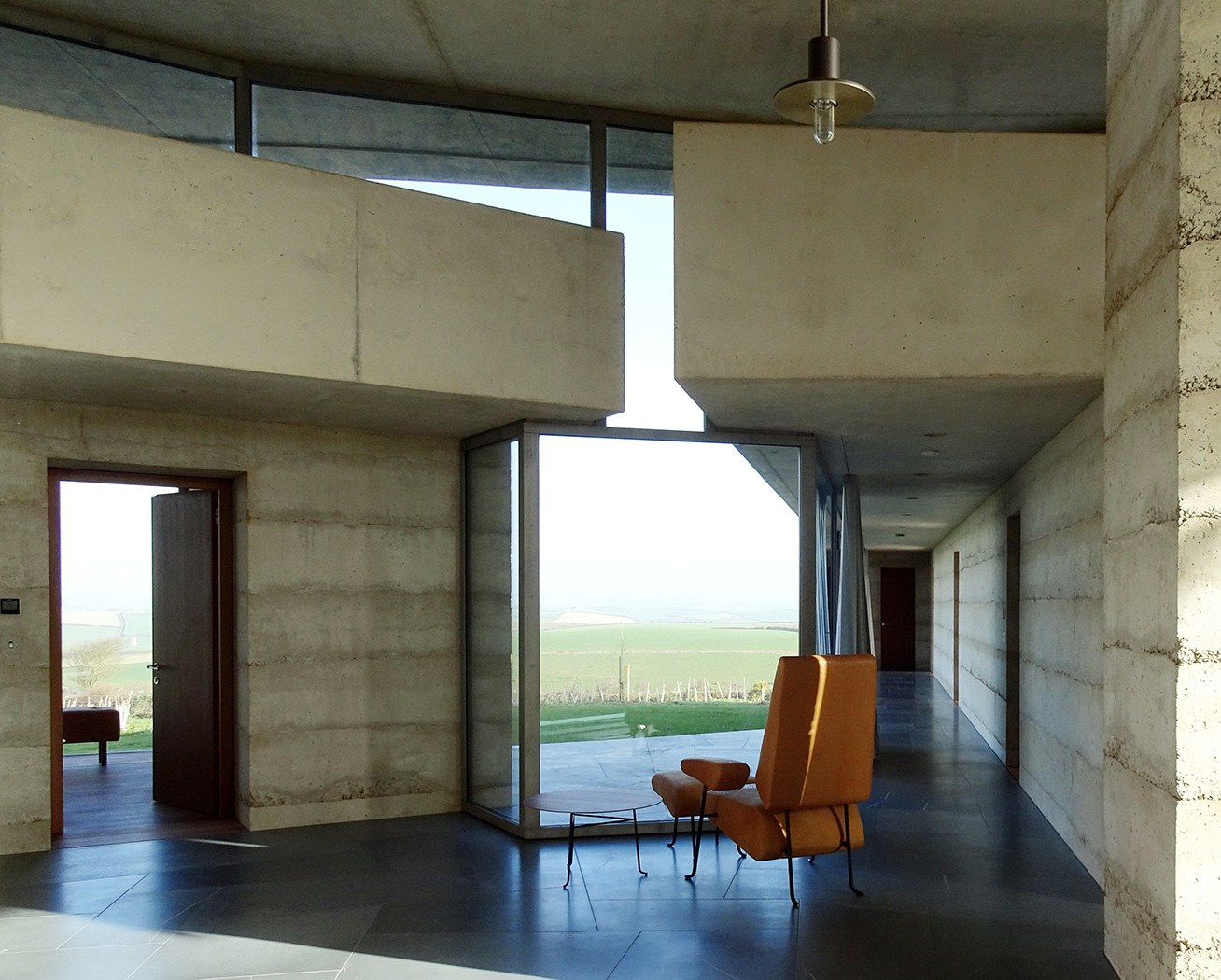 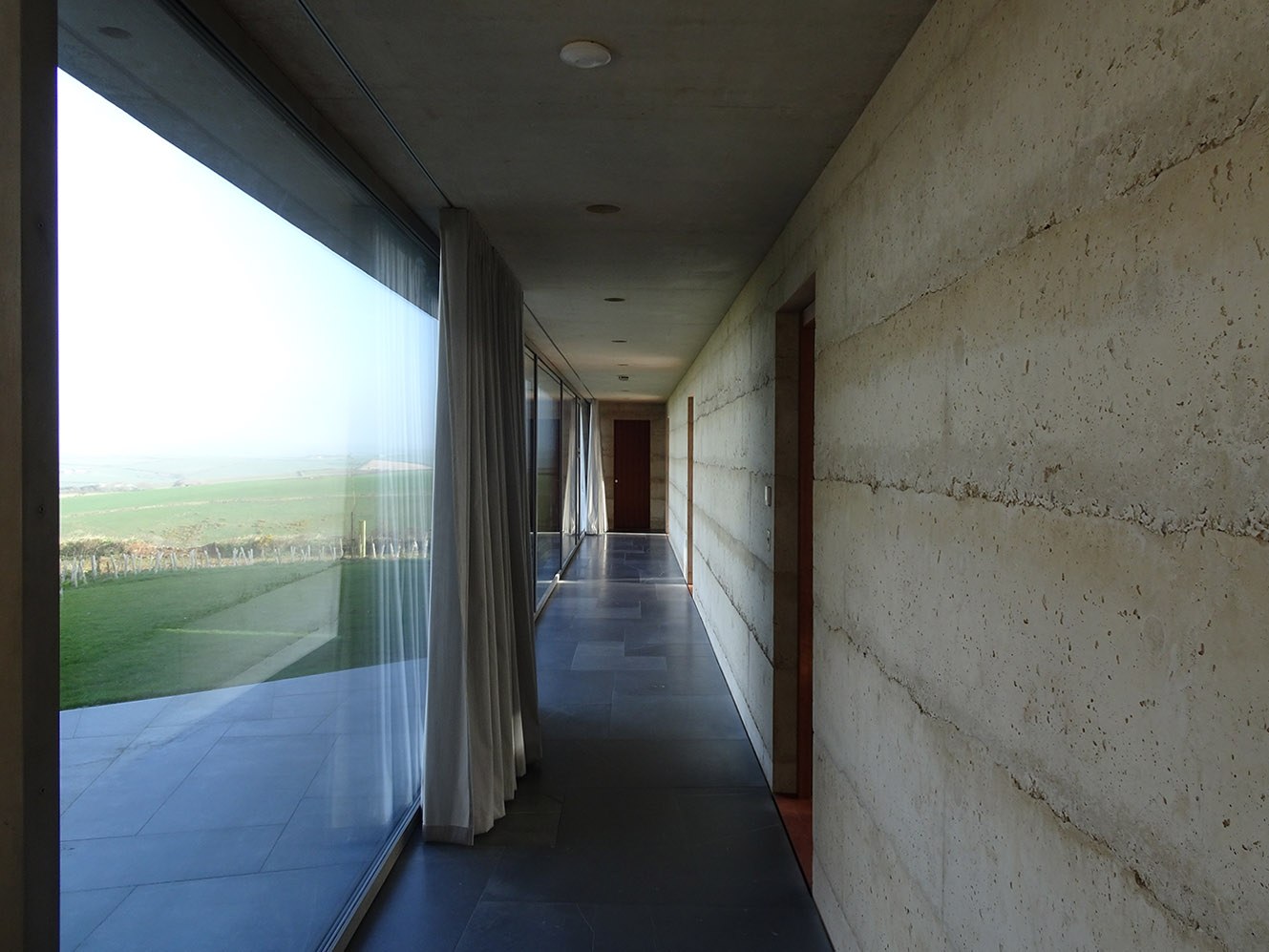 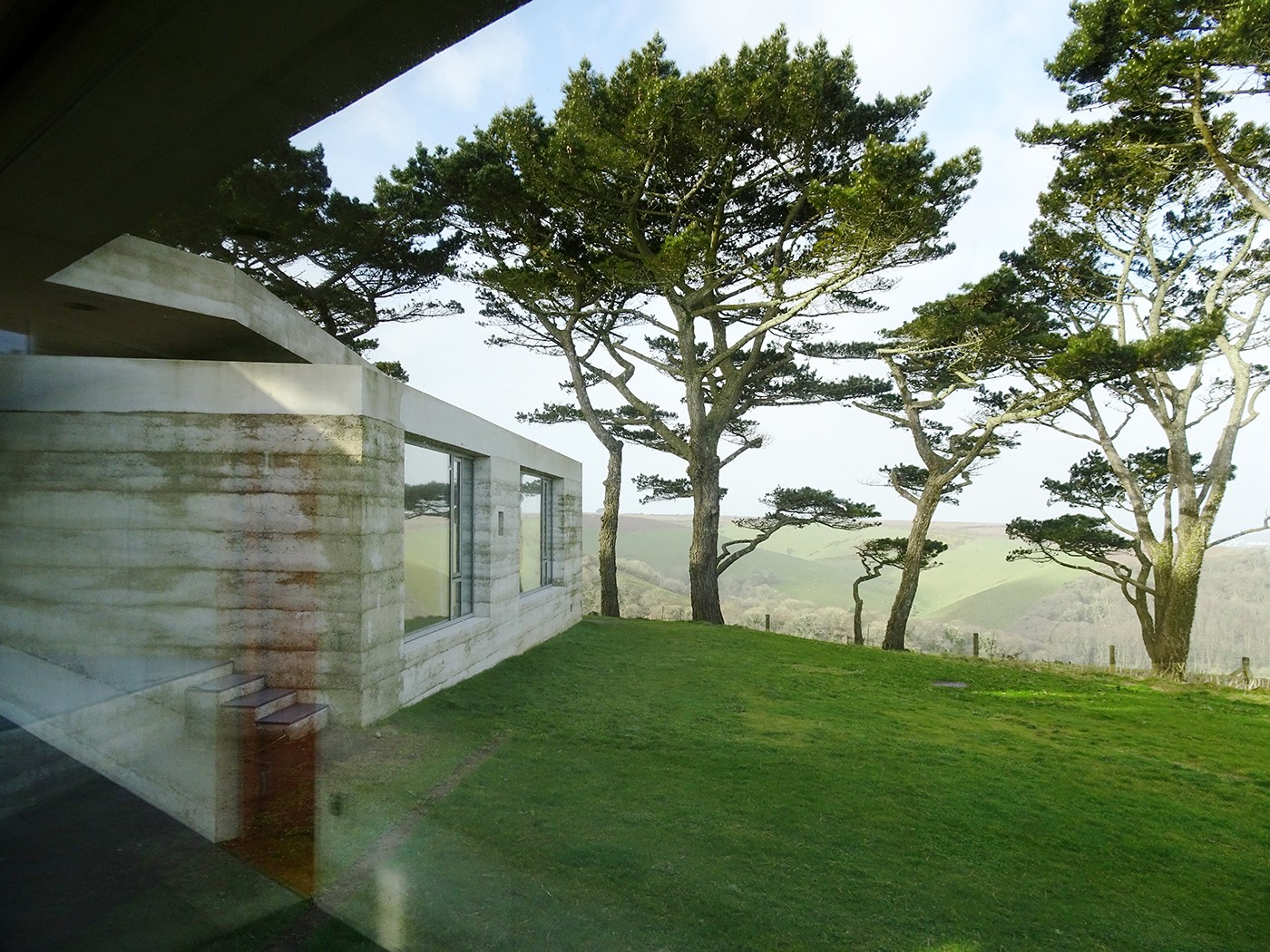 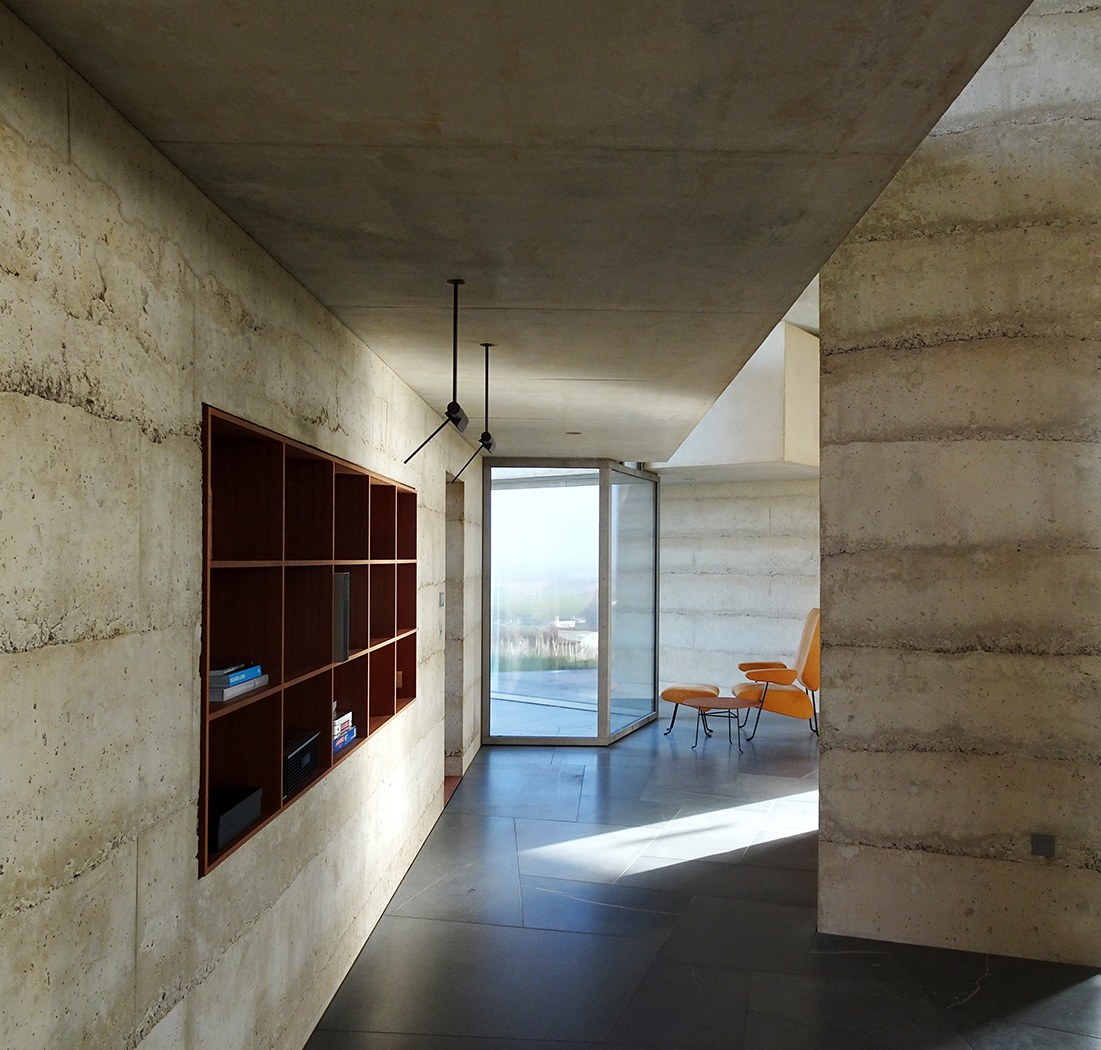 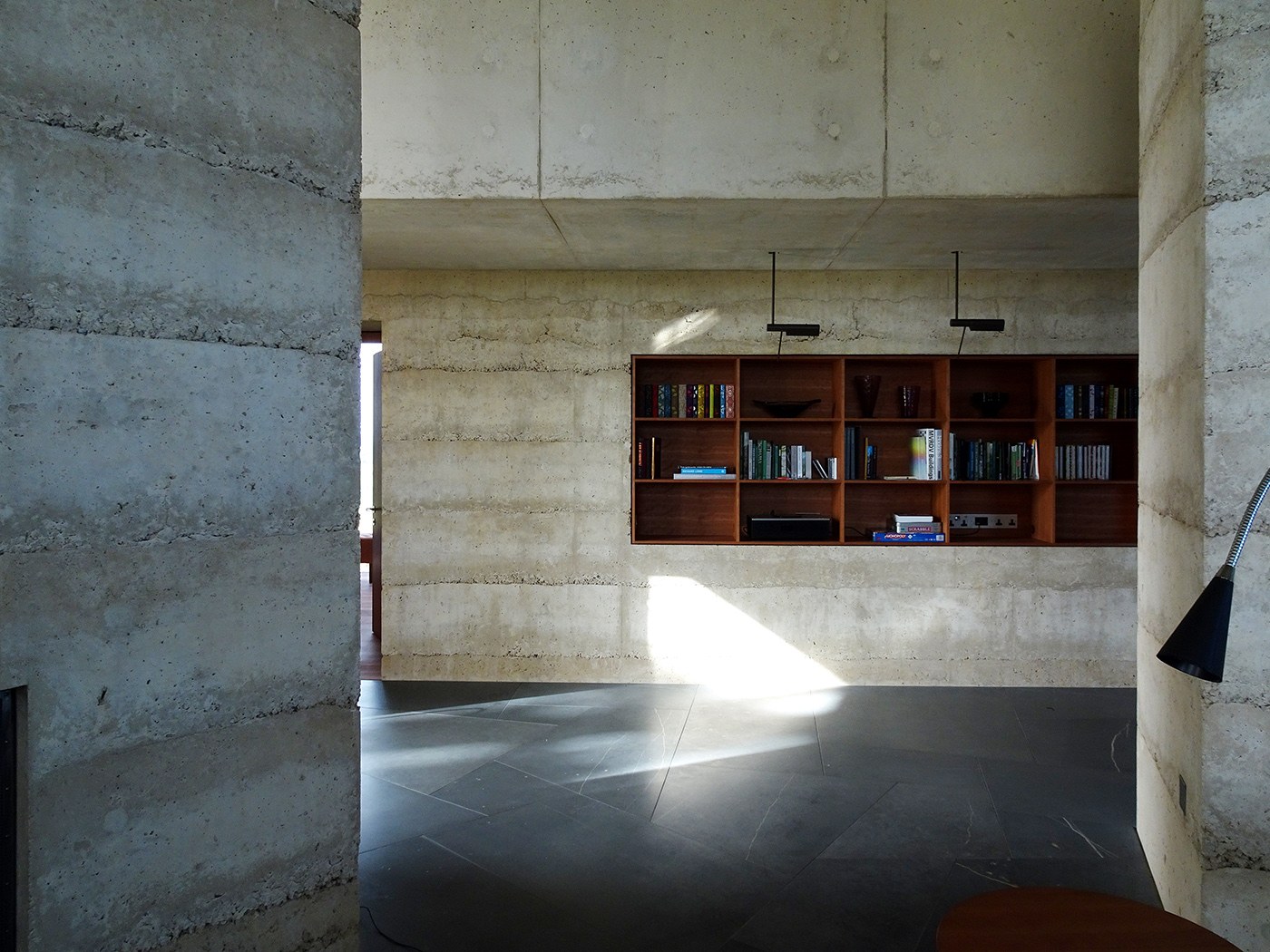 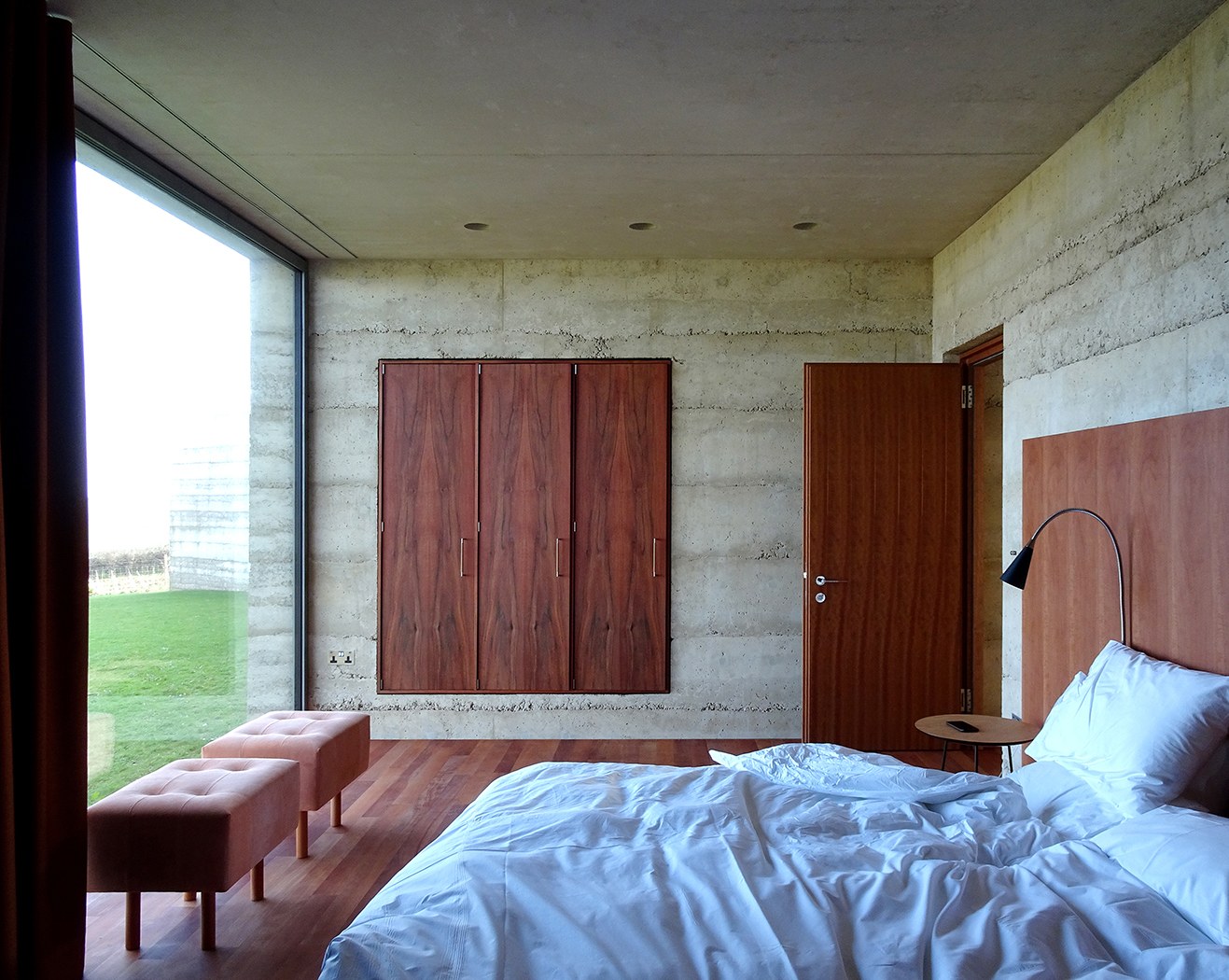 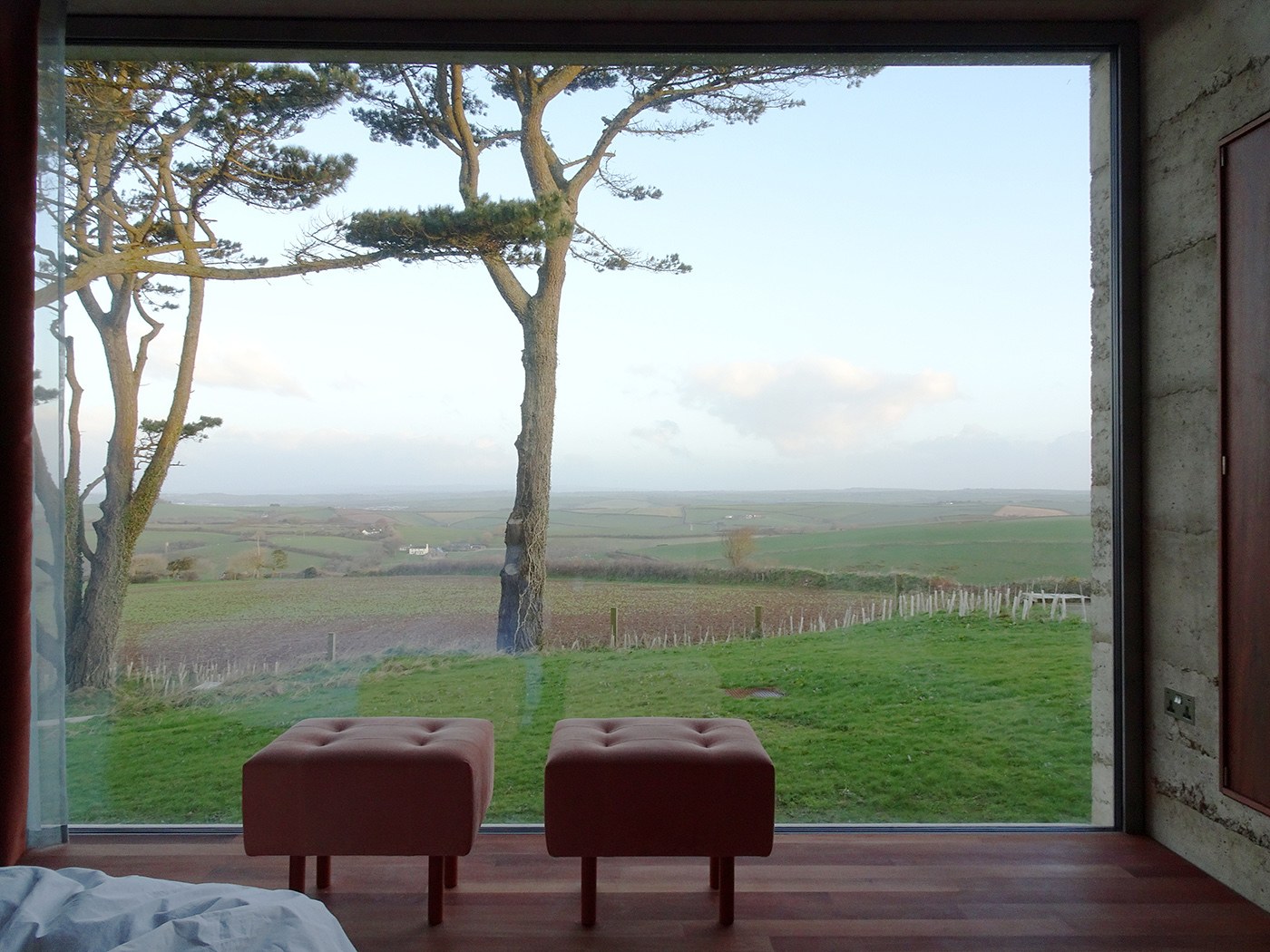 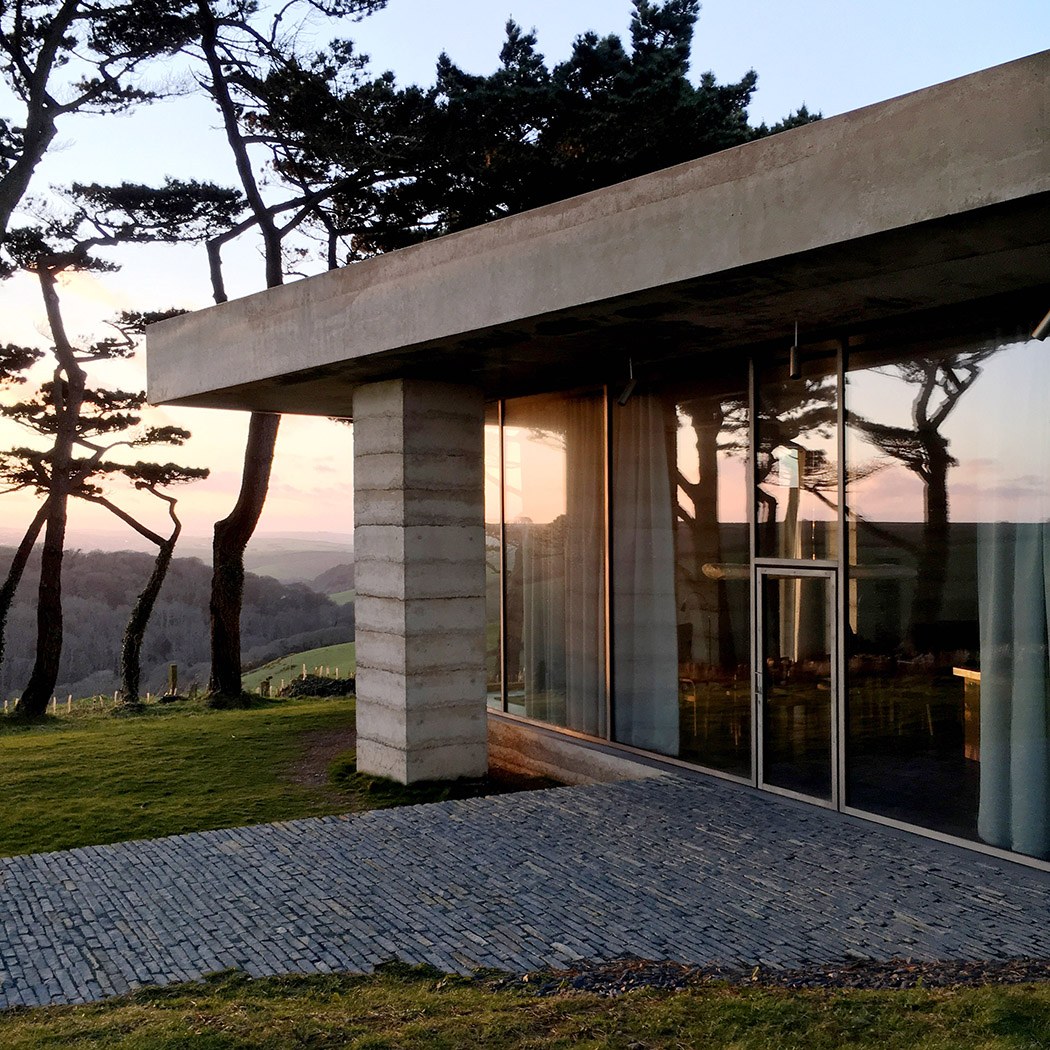 Asked in an interview question recently to define good design, I reflected, and wrote that it is a quality found in the most ancient art that has stood the test of millennia (and also in salt and pepper pots you use without noticing).

Alain de Botton cites ending the dogged English devotion to the draughty sash window as inspiration for commissioning his Living Architecture series of contemporary holiday houses. So it may distress him to hear that to me, Peter Zumthor’s Secular Retreat (2018), the latest and last of the series, feels as ancient as Stonehenge.

It sits like an ancient henge on a tumulus. It has been likened to a sundial, and by Zumthor himself to a Palladian villa. But to me it was neither of these things, too irregular to chart the sun and too withdrawn to be a villa. It certainly doesn’t feel like a normal house, to the detriment of normal houses; it has an other quality, solidly built yet spatially fluid. We felt elevated beings within it.

Zumthor’s studio’s early study models show windswept monoliths among the ring of pines that surround the site. Now realised, the massive columns (one of which houses a fireplace, another the oven, and another a cupboard for the tv) stand circling the main living space, like mythical druids or village elders in conversation, holding aloft the massive roof to protect their visitors. To one side two bedroom wings crash in, as if colossal standing stones knocked over by a passing giant. The bedrooms are like caves, opening out to the landscape, their bathrooms alongside sanctums of negative space carved out of the concrete.

To make concrete is to build twice: first in inverse as the formwork mould, whose negative space then becomes the positive form as the concrete is poured and sets. With exposed concrete, the slightest opening of the formwork under the immense pressure of the wet concrete gives ugly weeping corners, the negative leaking out into the positive. Here, in Zumthor’s method of one layer poured a day, exposed like geological strata, formwork only has to support one layer at a time instead of the whole height, a more forgiving casting process, as if a giant potter had cast the house.

But for the rest, there is no forgiveness. It took four years to find a quarry able to supply the large slabs of Somerset stone for the floor, recalling that of a church, the columns dictating a precisely irregular layout laid with joints of perfect regularity, that would once have been achieved without thinking but now only through fastidious obsession. In the bedrooms cherry floorboards are cut just back from the concrete walls to leave a perfectly even perimeter, wardrobes fit precisely into niches in the casting. The giant roof slab, apparently one, is in fact an inner slab, an insulation break, and an external slab on top, massively thick at the edges. Effort is effaced.

Economy seems to have been wonderfully inconsequential, an irrelevant whim. Expense has been measured on scales other than financial.

Outside, winter winds howled in silence beyond the triple glazed walls, in which windows opened on a switch, and were quickly closed again, with the solid suck of a Swiss gasket. The huge glazing makes artworks of the landscape. To walk around inside is to float as a ghost.

Departure was reluctant. Perhaps if it was a permanent rather than holiday house I might want more solid wall (perhaps somewhere to hang art, how bourgeoisly pedestrian of me); a little more permanence, some more shelter. By the end of our stay I had come to forgive the brightly coloured Zumthor-designed seating, with its air of the airport-lounge, as being somehow appropriately transient. The loftiness of the four metre-high space had inspired us to good food and convivial conversation, the refuge of the bedrooms to deep sleep. To inhabit the space of this house, even temporarily, was a sublimely transcendent experience.

Buildings in the UK can only be protected through listing when they are thirty years old, once time has judged their worth. On the Secular Retreat’s thirtieth birthday in early 2048, it will be listed, Grade I.