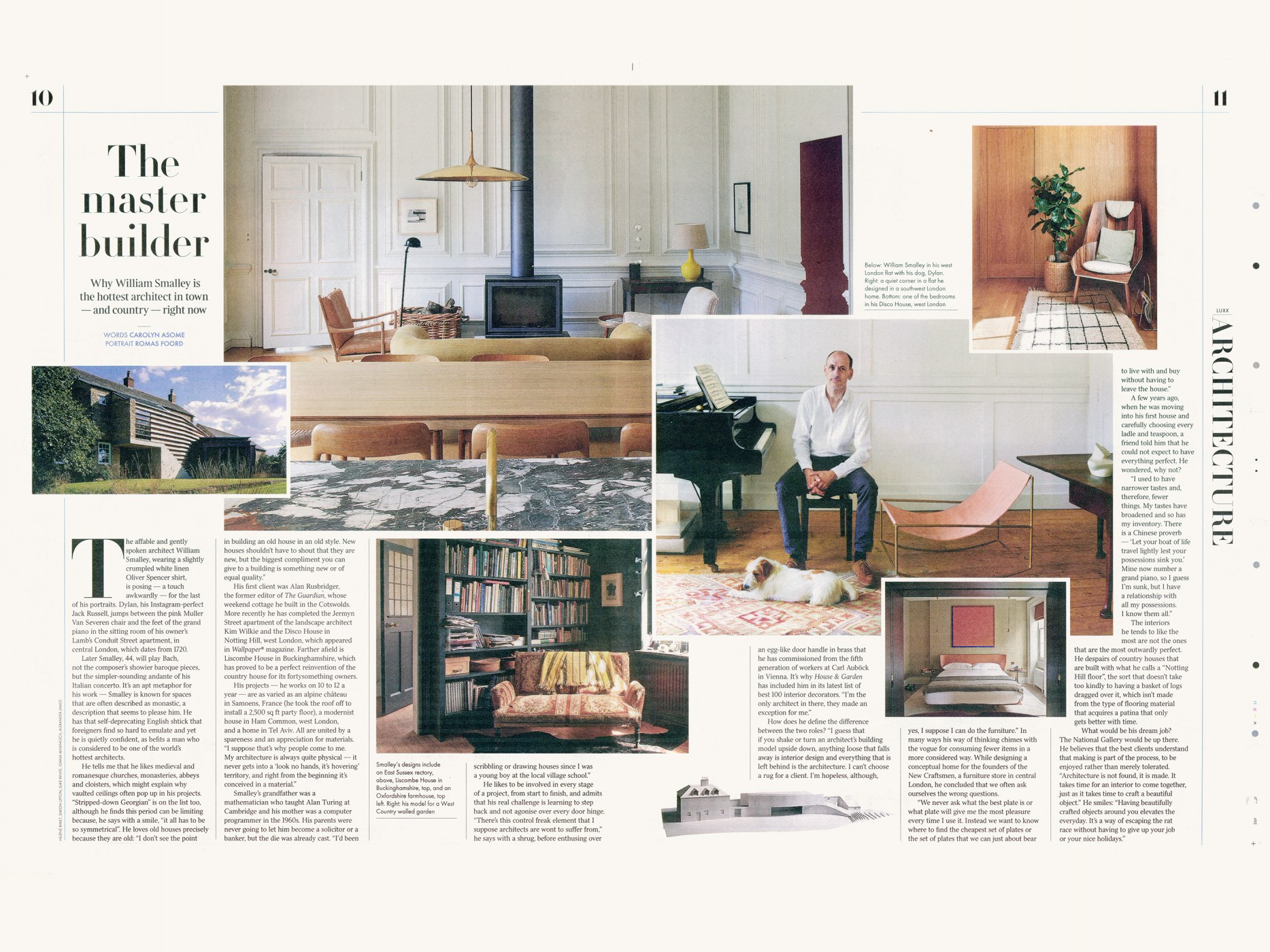 The affable and gently spoken architect William Smalley, wearing a slightly crumpled white linen Oliver Spencer shirt, is posing – a touch awkwardly – for the last of his portraits. Dylan, his Instagram-perfect Jack Russell, jumps between the pink Muller van Severen chair and the feet of the grand piano in the sitting room of his owner’s Lamb’s Conduit Street apartment, in central London, which dates from 1720.

Later Smalley will play Bach, not the composer’s showier baroque pieces, but the simpler-sounding andante of his Italian concerto. It’s an apt metaphor for his work – Smalley is known for spaces that are often described as monastic, a description that seemed to please him. He has that self-deprecating English shtick that foreigners find so hard to emulate and yet he is quietly confident, as befits a man who is considered to be one of the world’s hottest architects.

He tells me that he likes medieval and Romanesque churches, monasteries, abbeys and cloisters, which might explain why vaulted ceilings often pop up in his projects. “Stripped-down Georgian” is on the list too, although he finds this period can be limiting, because he says with a smile, “it all has to be so symmetrical”. He loves old houses precisely because they are old: “I don’t see the point in building a new house in an old style. New houses shouldn’t have to shout that they are new, but the biggest compliment you can give to a building is something new of equal quality.”

His first client was Alan Rusbridger, the former editor of The Guardian, whose weekend cottage he built in the Cotswolds. More recently he has completed the Jermyn Street apartment of the landscape architect Kim Wilkie and the Disco House in Notting Hill, west London, which appeared in Wallpaper* magazine. Farther afield is Liscombe House in Buckinghamshire, which has proved to be a perfect reinvention of the country house for its fortysomething owners.

His projects – he works on 10-12 a year – are as varied as an alpine château in Samoëns, France (he took the roof off to install a 2,500 sq ft party floor), a modernist house in Ham Common, west London, and a home in Tel Aviv. All are united by a spareness and appreciation for materials. “I suppose that’s why people come to me. My architecture is always quite physical – it never gets into a ‘look no hands, it’s hovering’ territory, and right from the beginning it’s conceived in a material.”

Smalley’s grandfather was a mathematician who taught Alan Turing at Cambridge and his mother was a computer programmer in the 1960s. His parents were never going to let him become a solicitor or a banker, but the die was already cast. “I’d been scribbling or drawing houses since I was a young boy at the local village school.”

He likes to be involved in every stage of a project, from start to finish, and admits that his real challenge is learning to step back and not agonise over every door hinge. “There’s this control freak element that I suppose architects are wont to suffer from,” he says with a shrug, before enthusing over an egg-like door handle in brass that he has commissioned from the fifth generation of workers at Carl Auböck in Vienna. It’s why House and Garden has included him in its latest list of best 100 interior decorators. “I’m the only architect there, they made an exception for me.”

How does he define the difference between the two roles? “I guess that if you shake or turn an architect’s building model upside down, anything loose that falls away is interior design and everything that is left behind is architecture. I can’t choose a rug for a client. I’m hopeless, although, yes, I suppose I can do the furniture.” In many ways his way of thinking chimes with the vogue of consuming fewer items in a more considered way. While designing a conceptual home for the founders of the New Craftsmen, a furniture store in central London, he concluded that we often ask ourselves the wrong questions.

“We never ask what the best plate is or what plate will give me the most pleasure every time I use it. Instead we want to know where to find the cheapest set of plates or the set of plates that we can just about to bear to live with and buy without having to leave the house.”

A few years ago, when he was moving into his first house and carefully choosing every ladle and teaspoon, a friend told him that he could not expect to have everything perfect. He wondered, why not?

“I used to have narrower tastes and, therefore, fewer things. My tastes have broadened and so has my inventory. There is a Chinese proverb – ‘Let your boat of life travel lightly lest your possessions sink you.’ Mine now number a grand piano, so I guess I’m sunk, but I have a relationship with all my possessions. I know them all.”

The interiors he tends to like the most are not the ones that are the most outwardly perfect. He despairs of country houses that are built with what he calls a “Notting Hill floor”, the sort that doesn’t take too kindly to having a basket of logs dragged over it, which isn’t made from the type of flooring material that acquires a patina that only gets better with time.

What would be his dream job? The National Gallery would be up there. He believes that the best clients understand that making is part of the process, to be enjoyed rather than merely tolerated. “Architecture is not found, it’s made. It takes time for an interior to come together, just as it takes time to craft a beautiful object.” He smiles: “Having beautifully crafted objects around you elevates the everyday. It’s a way of escaping the rat race without having to give up your job or your nice holidays.”