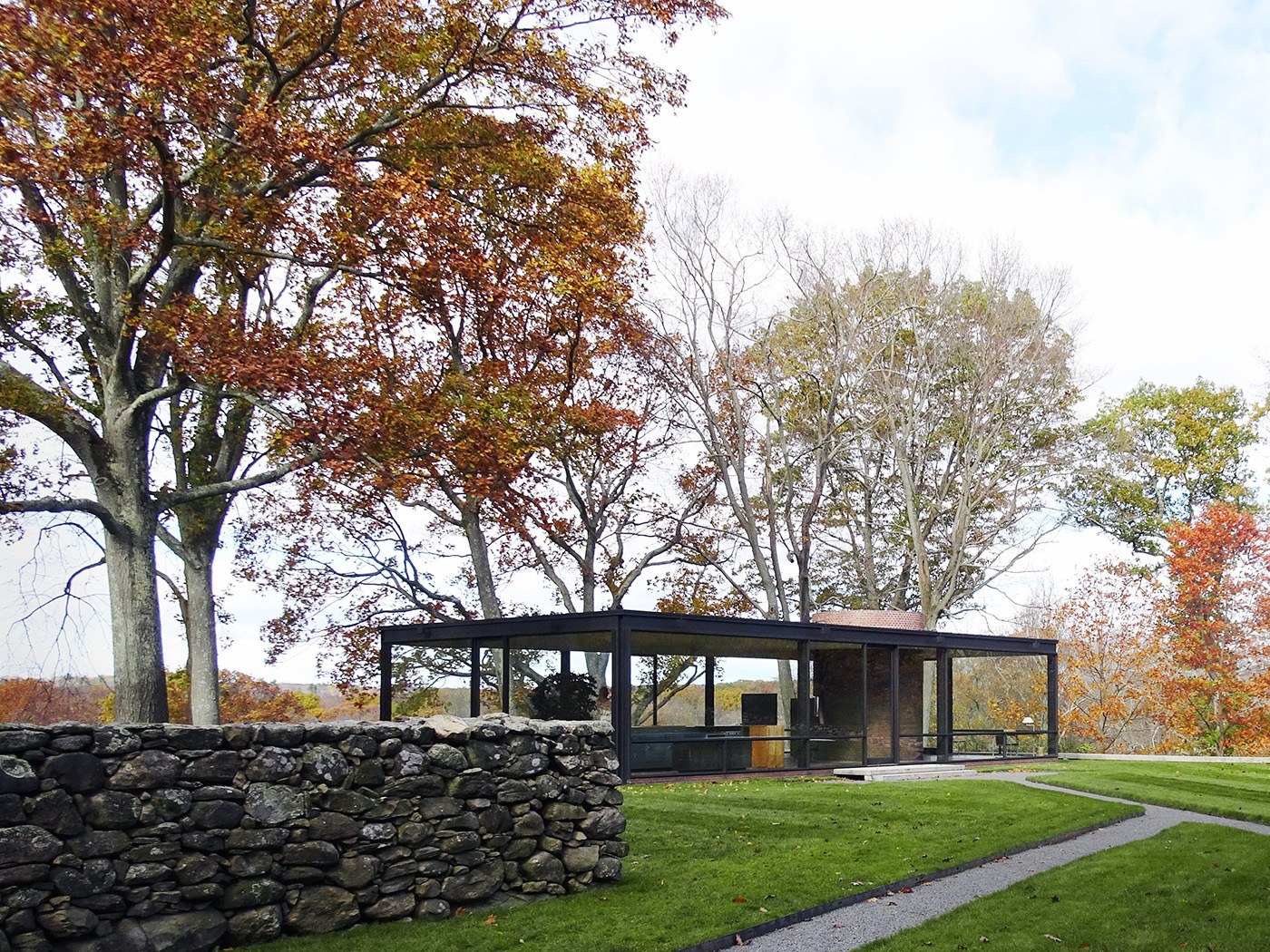 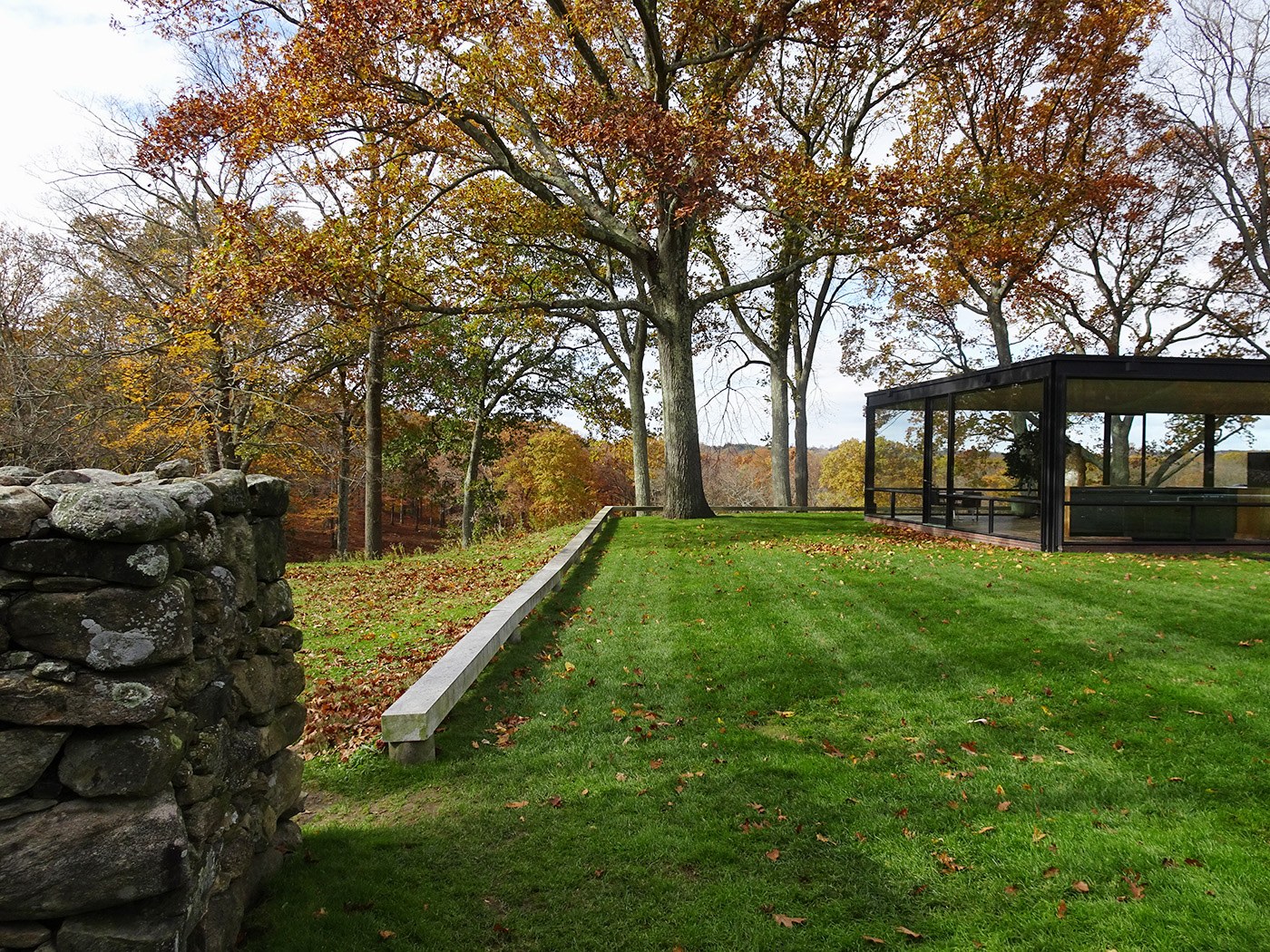 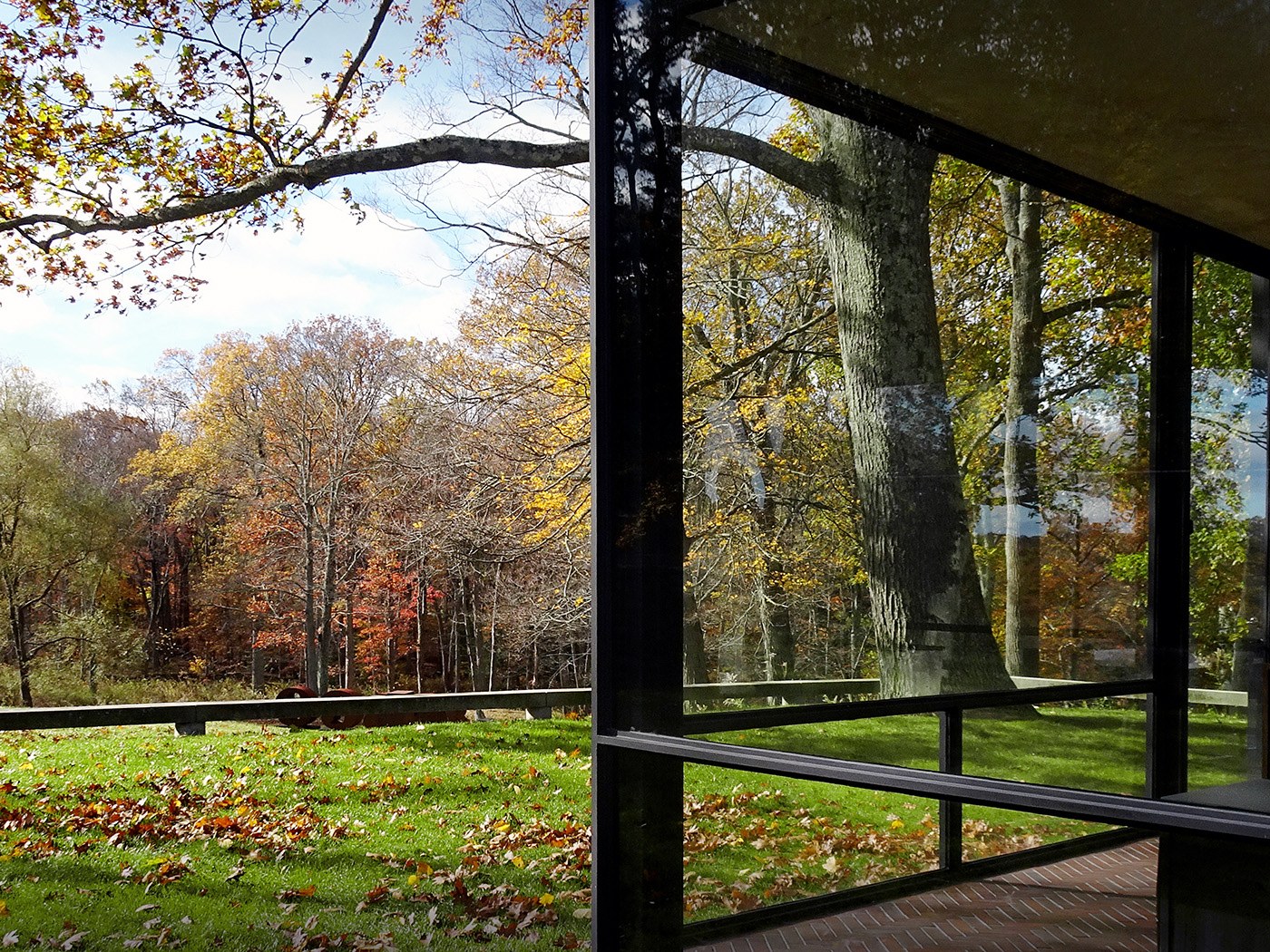 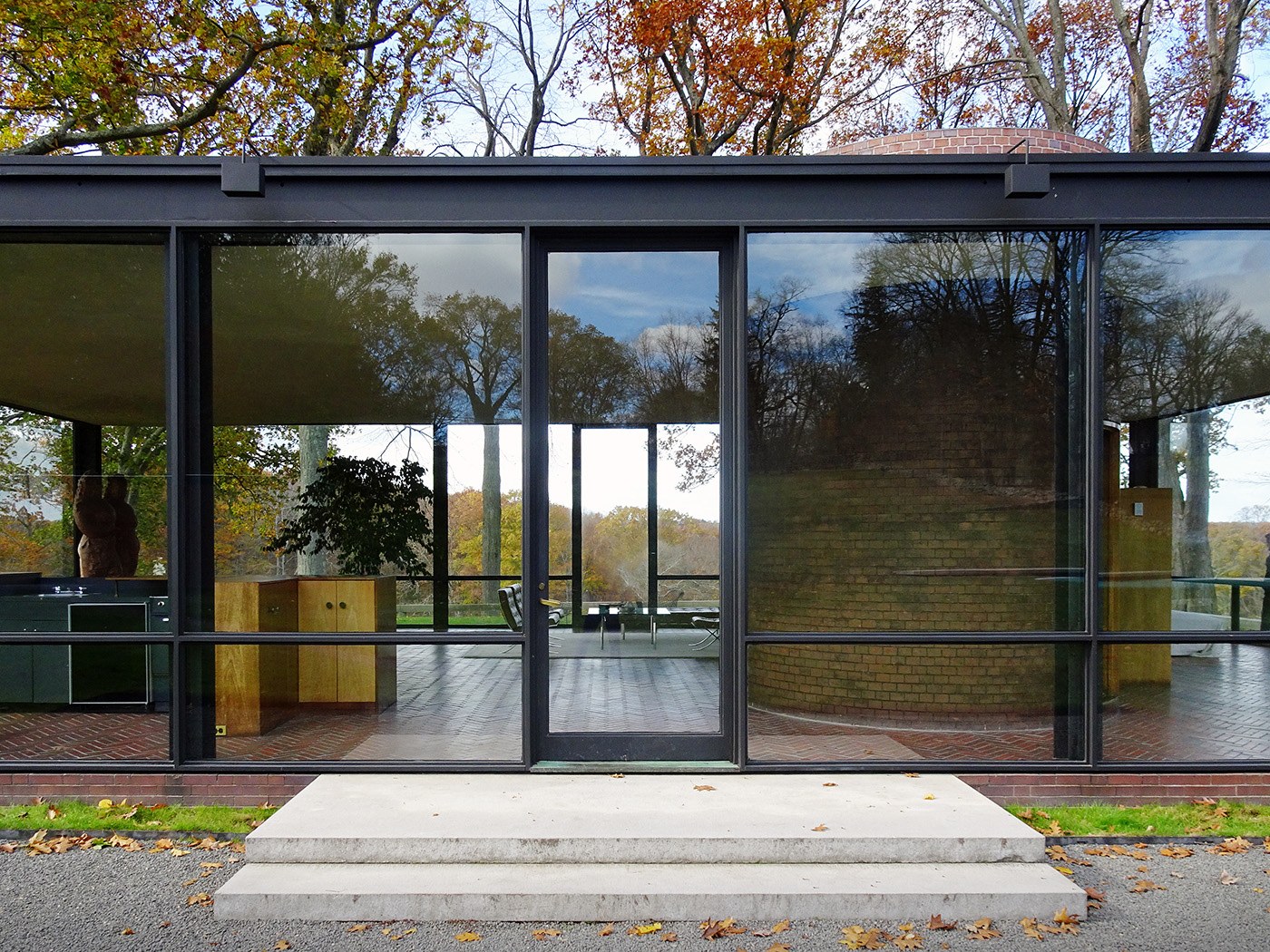 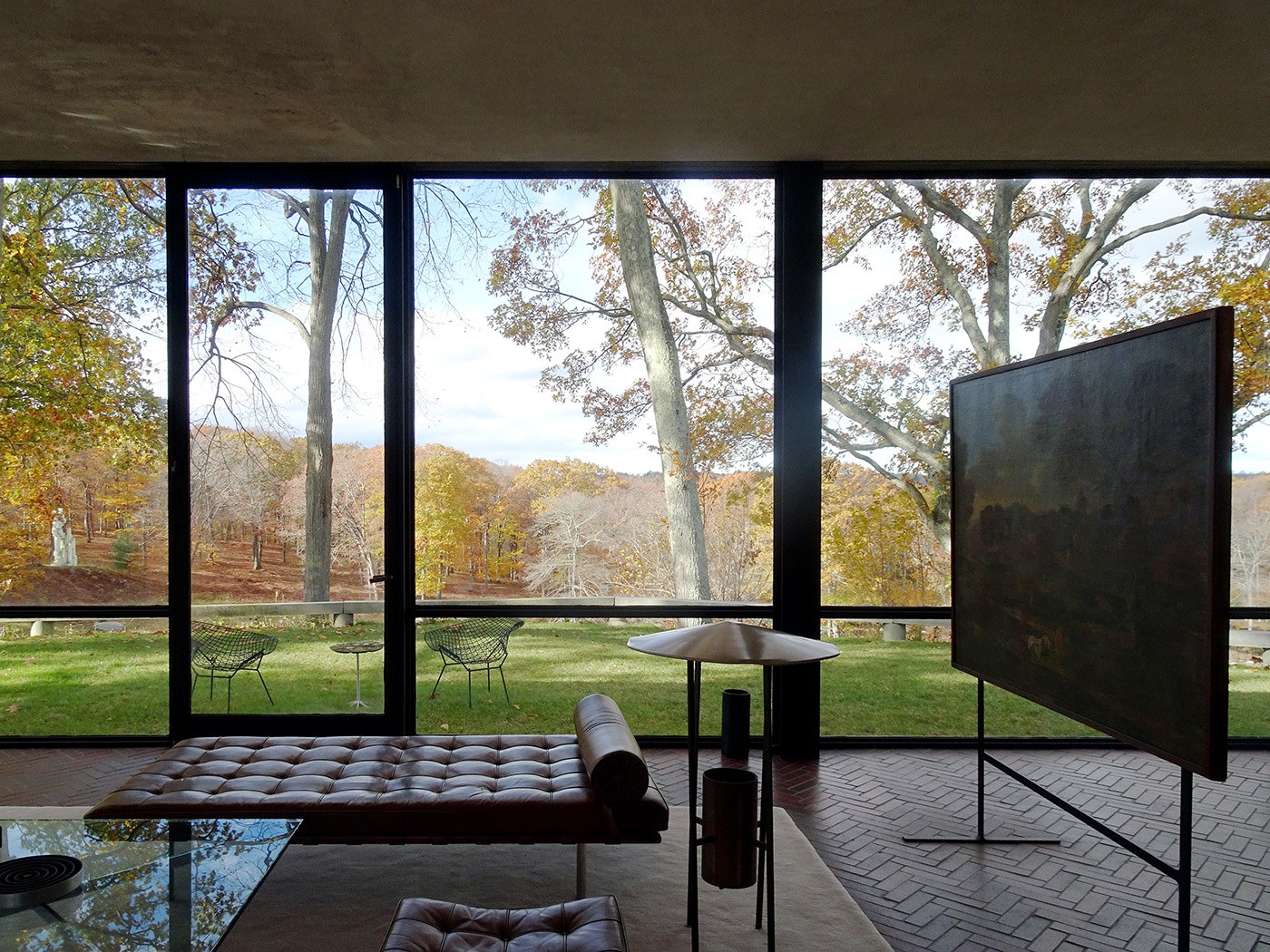 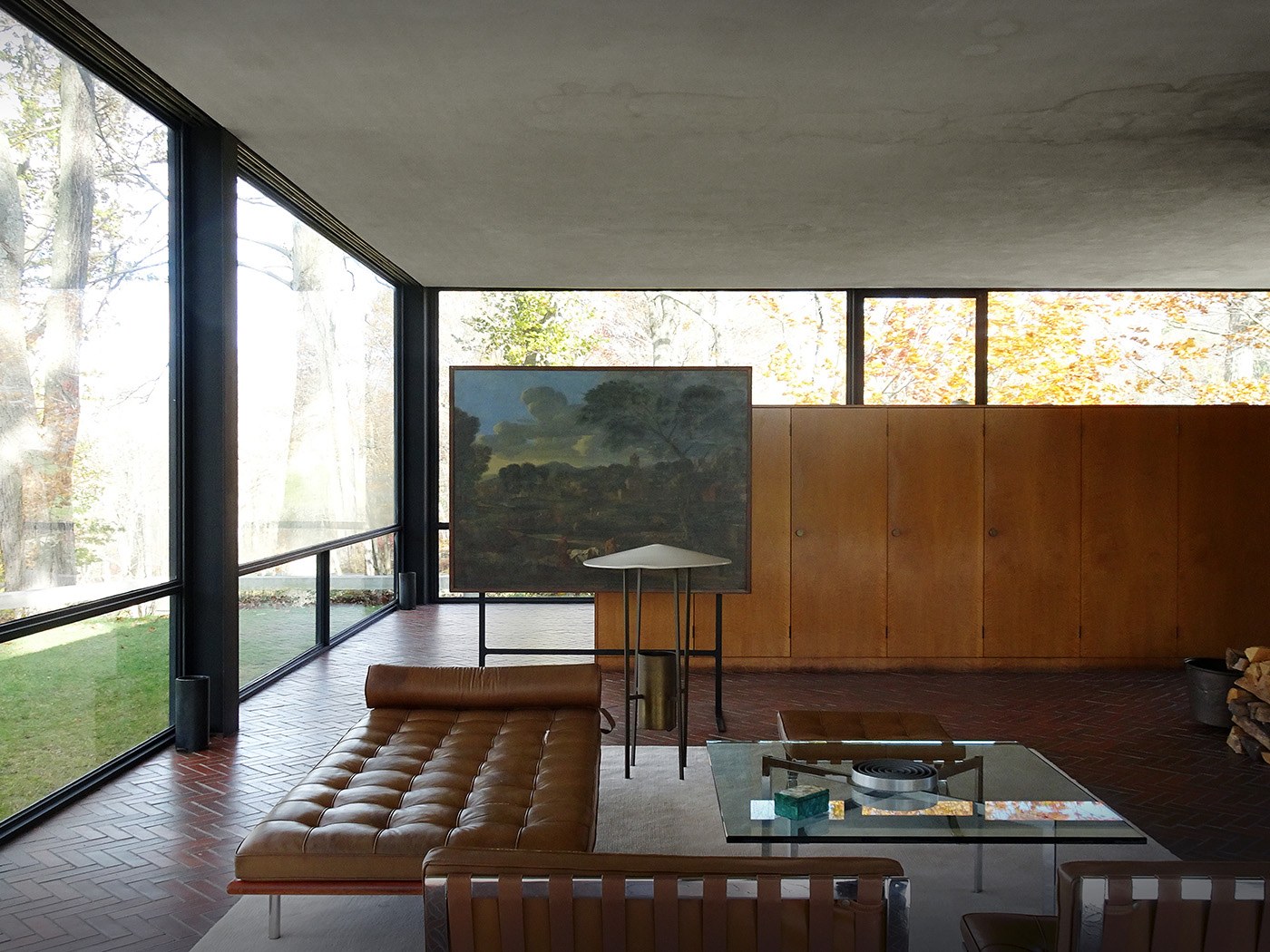 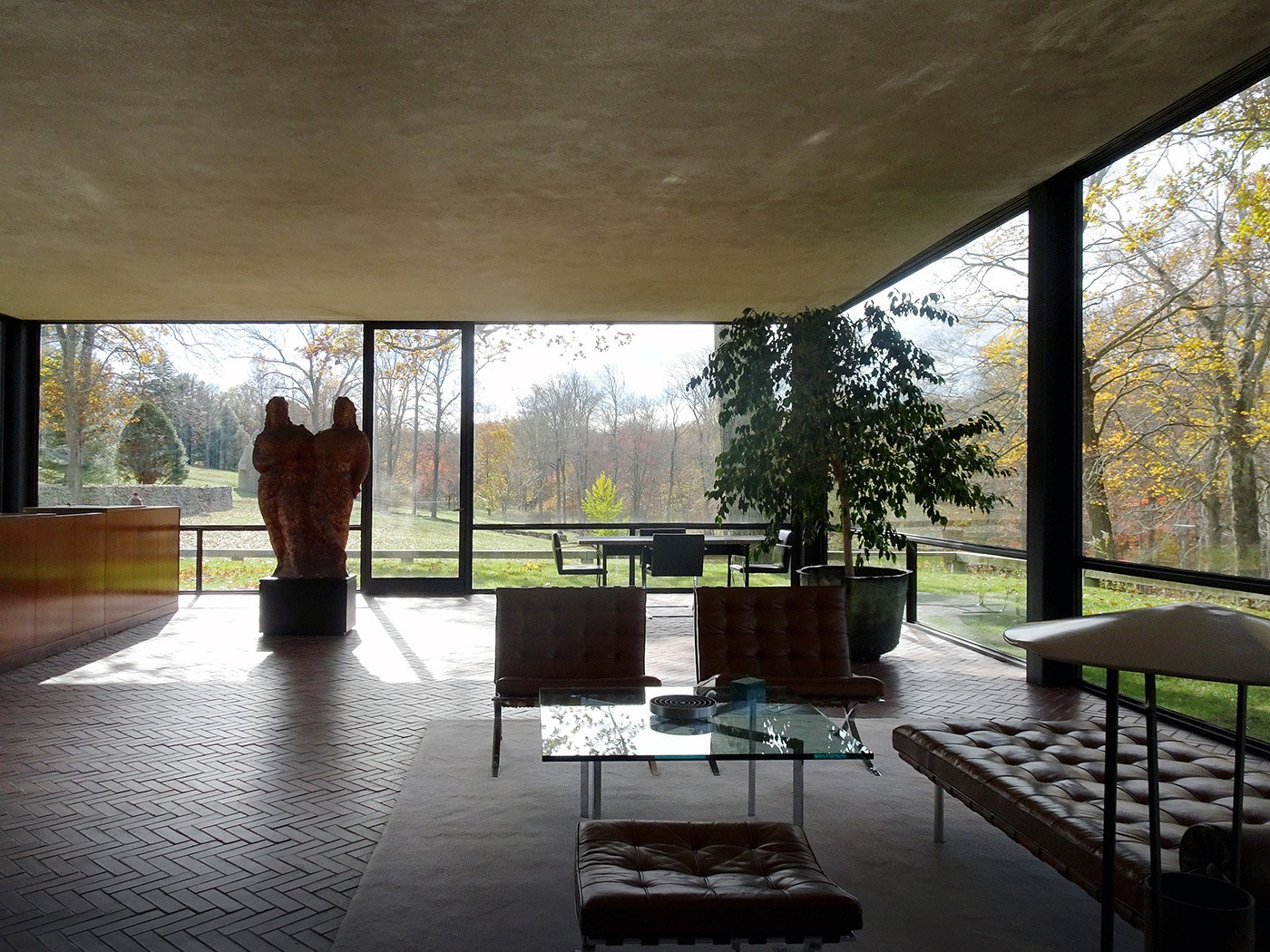 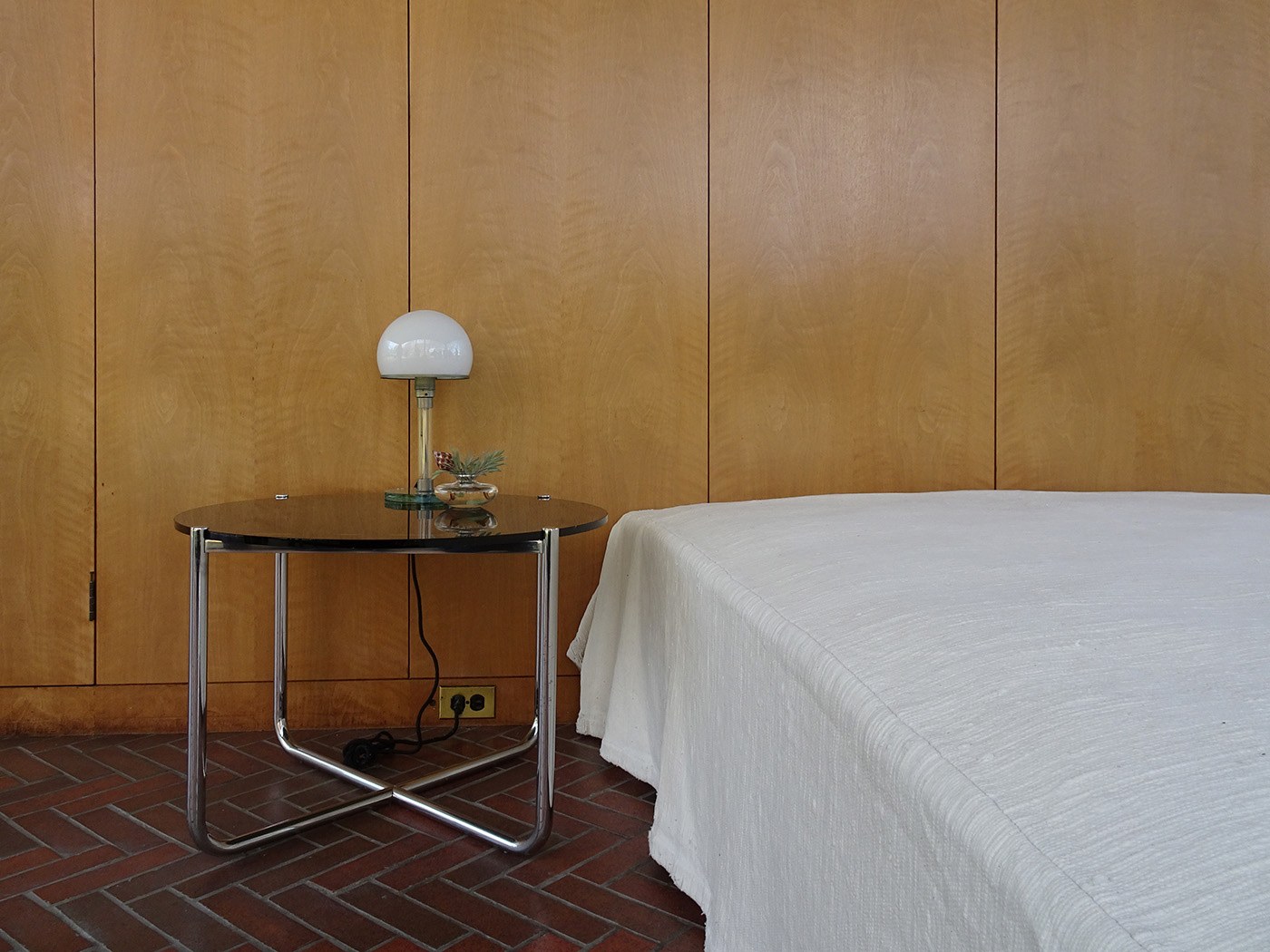 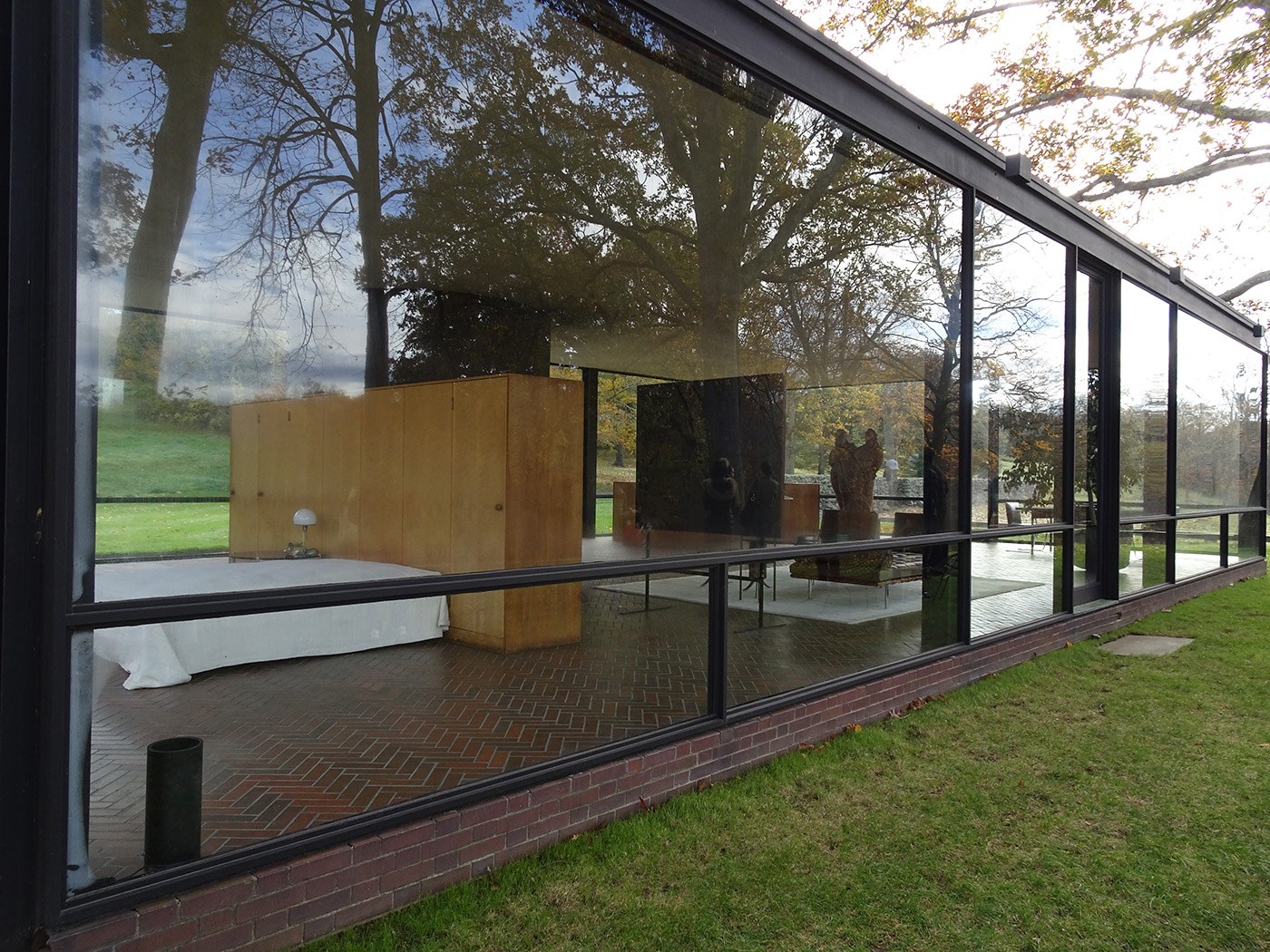 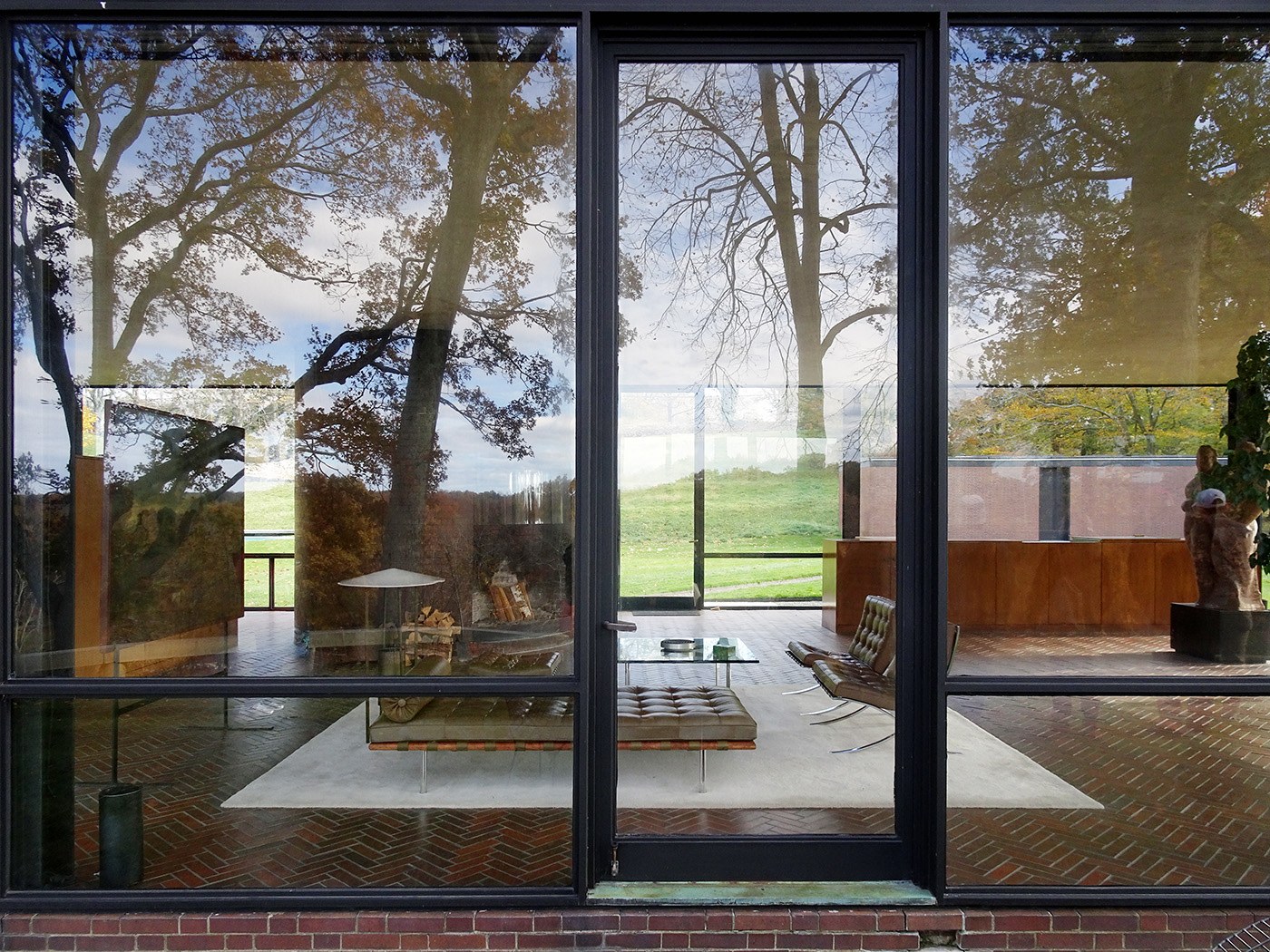 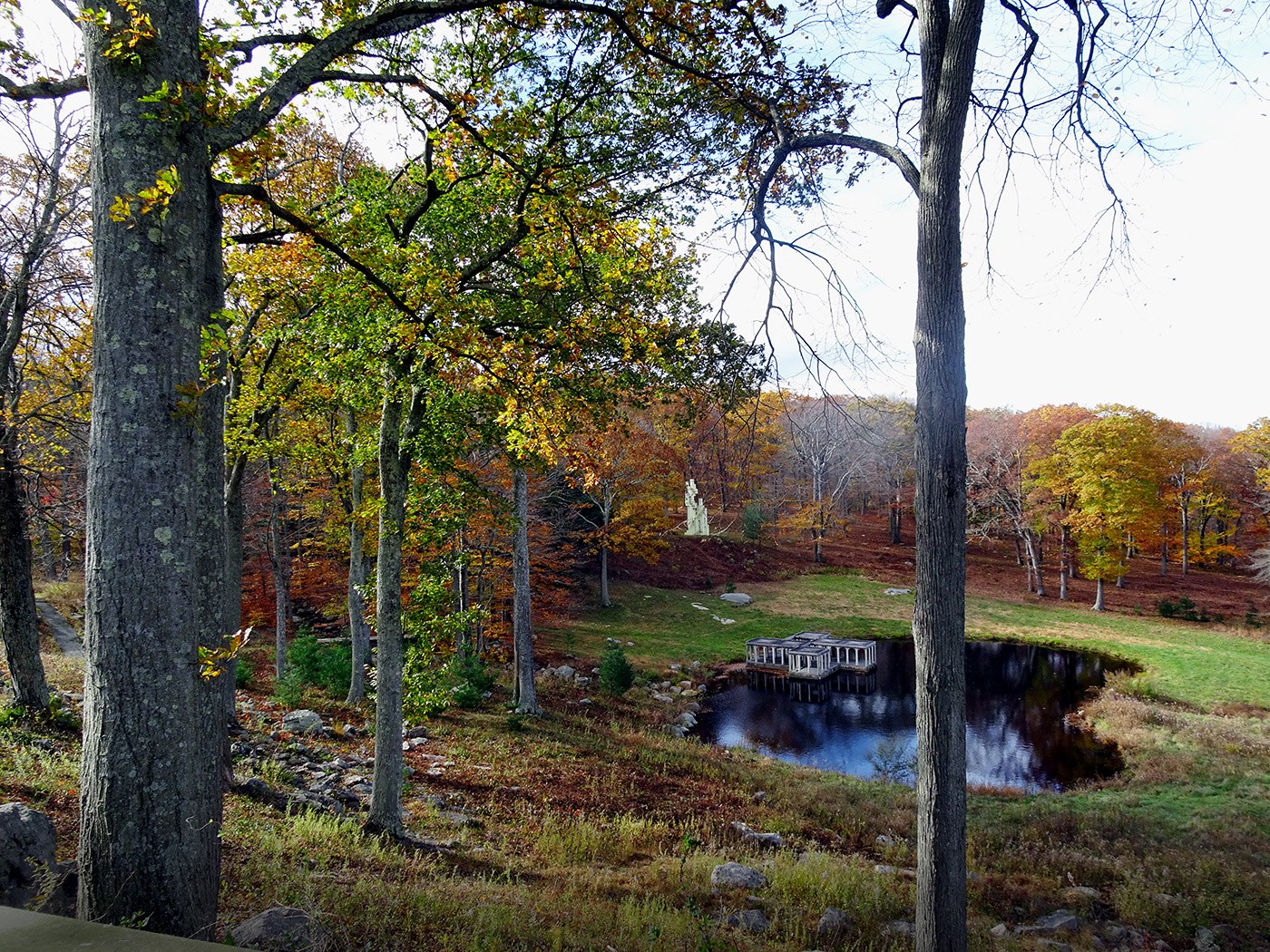 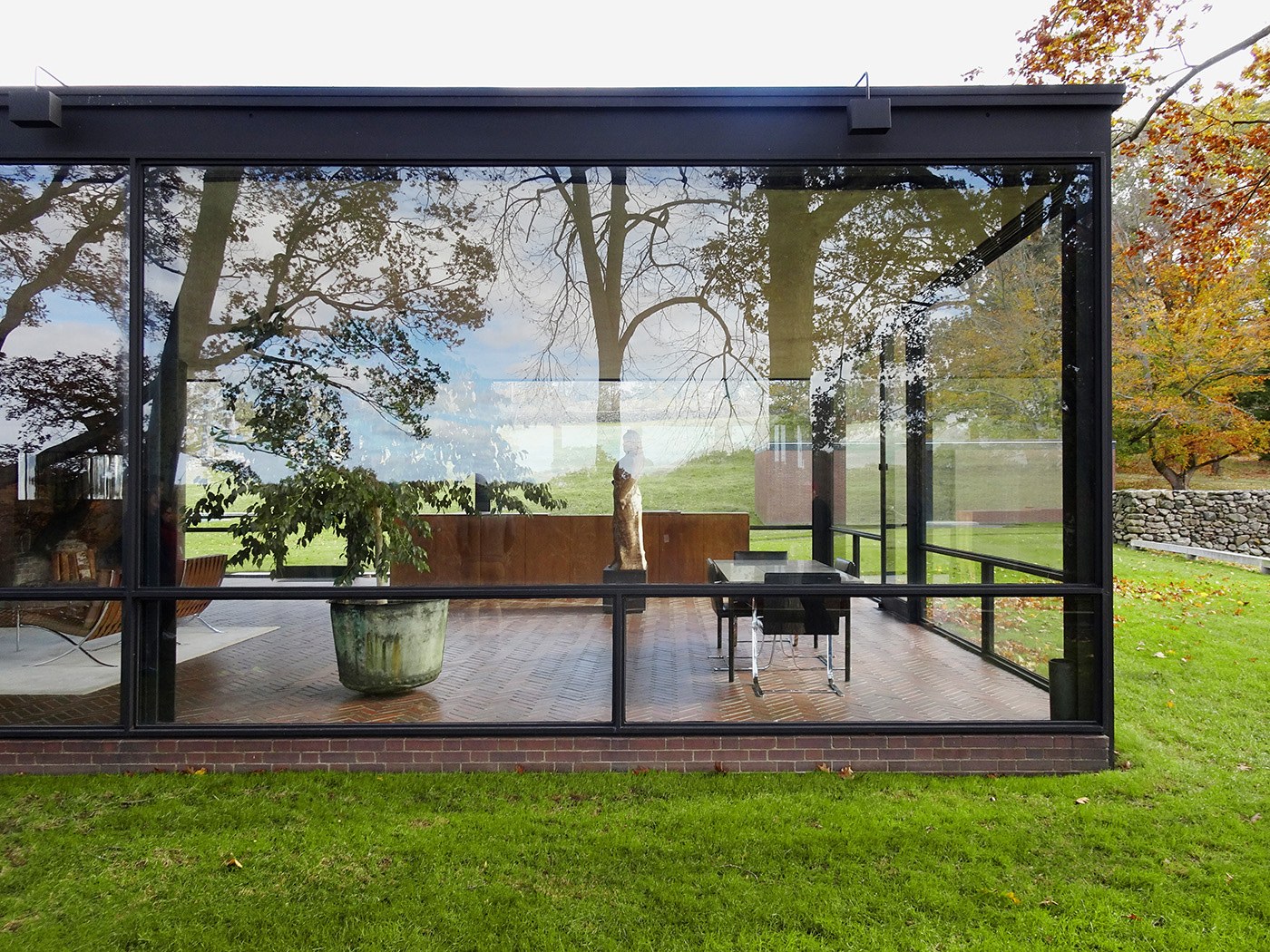 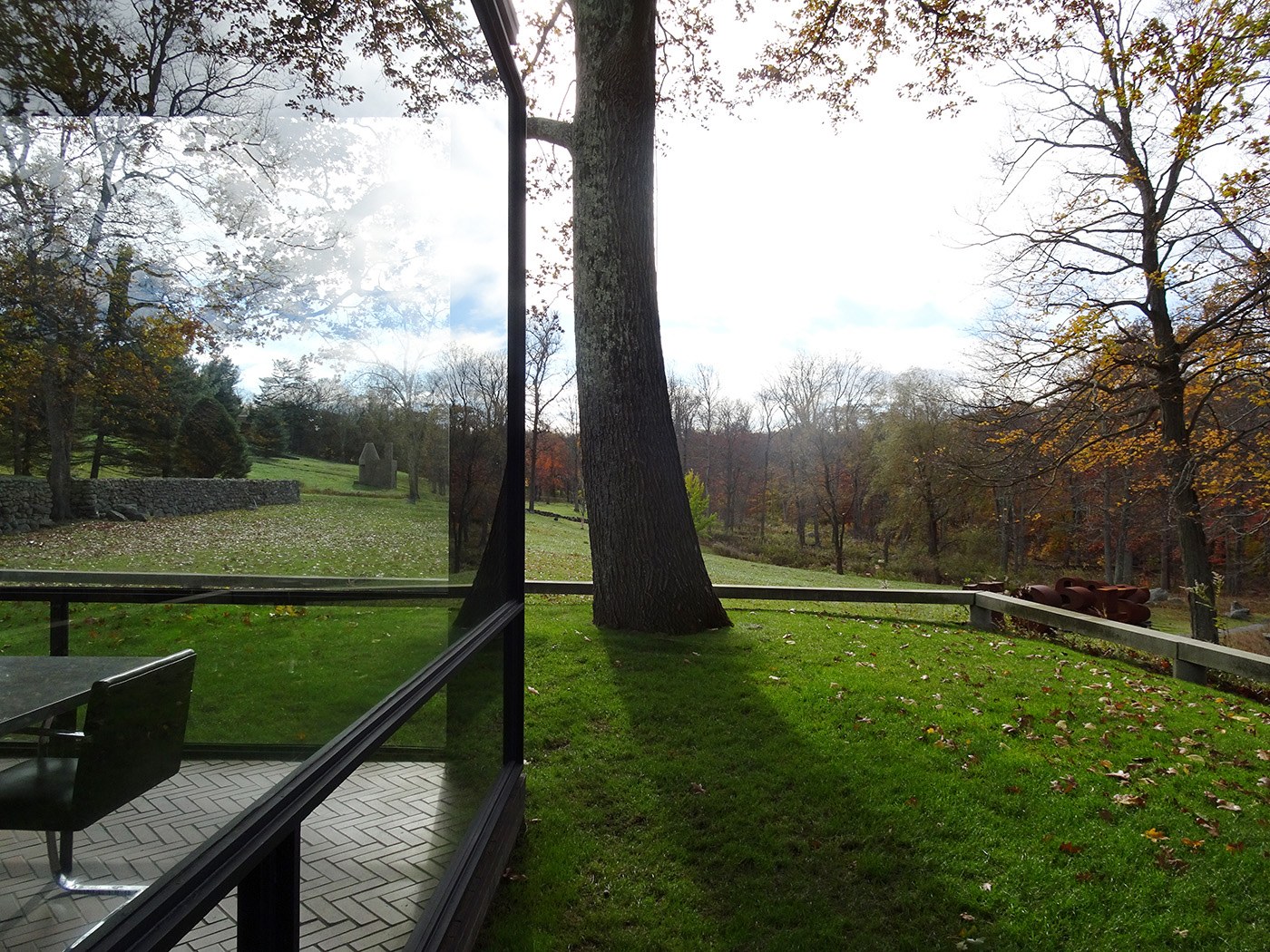 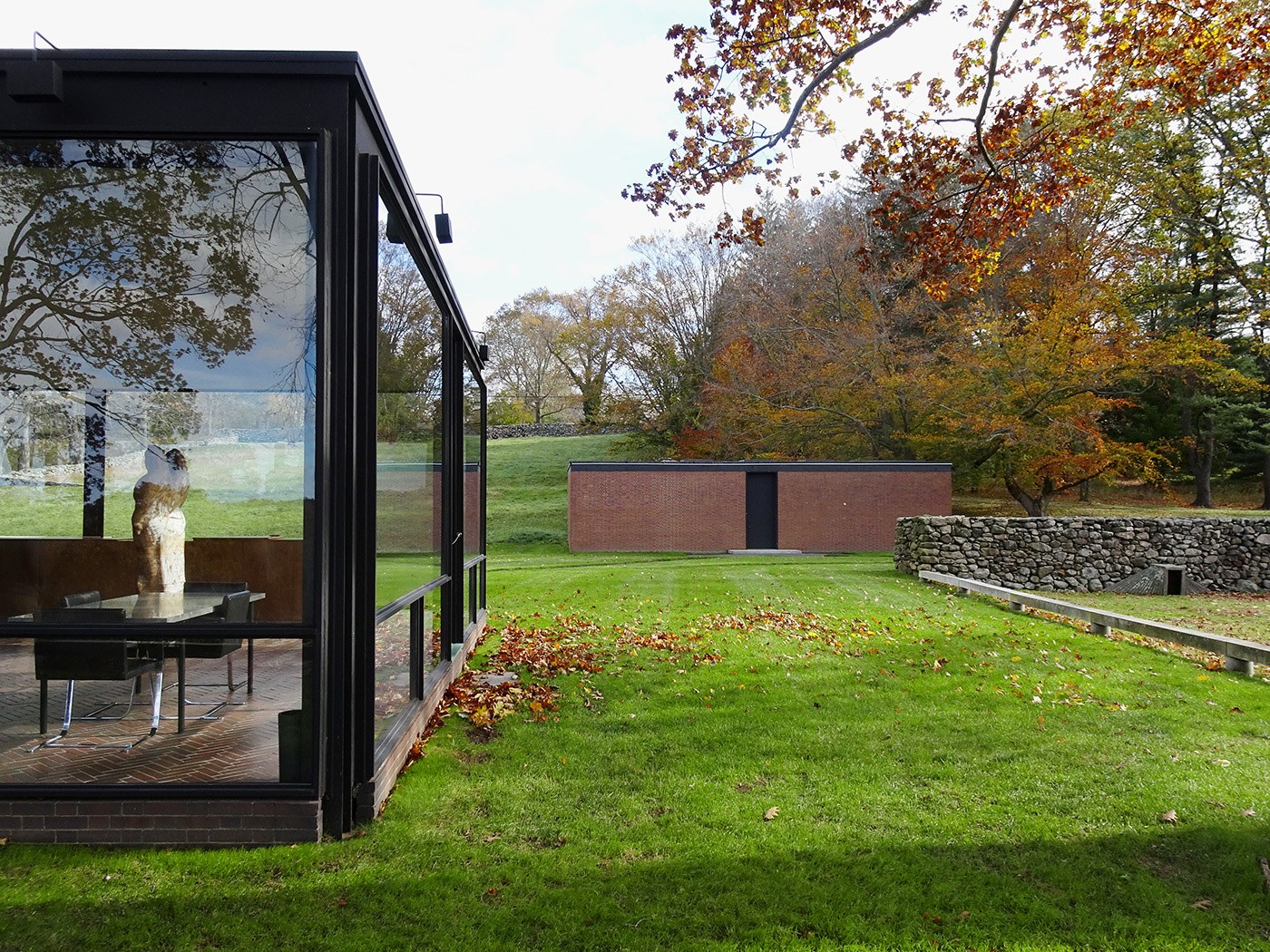 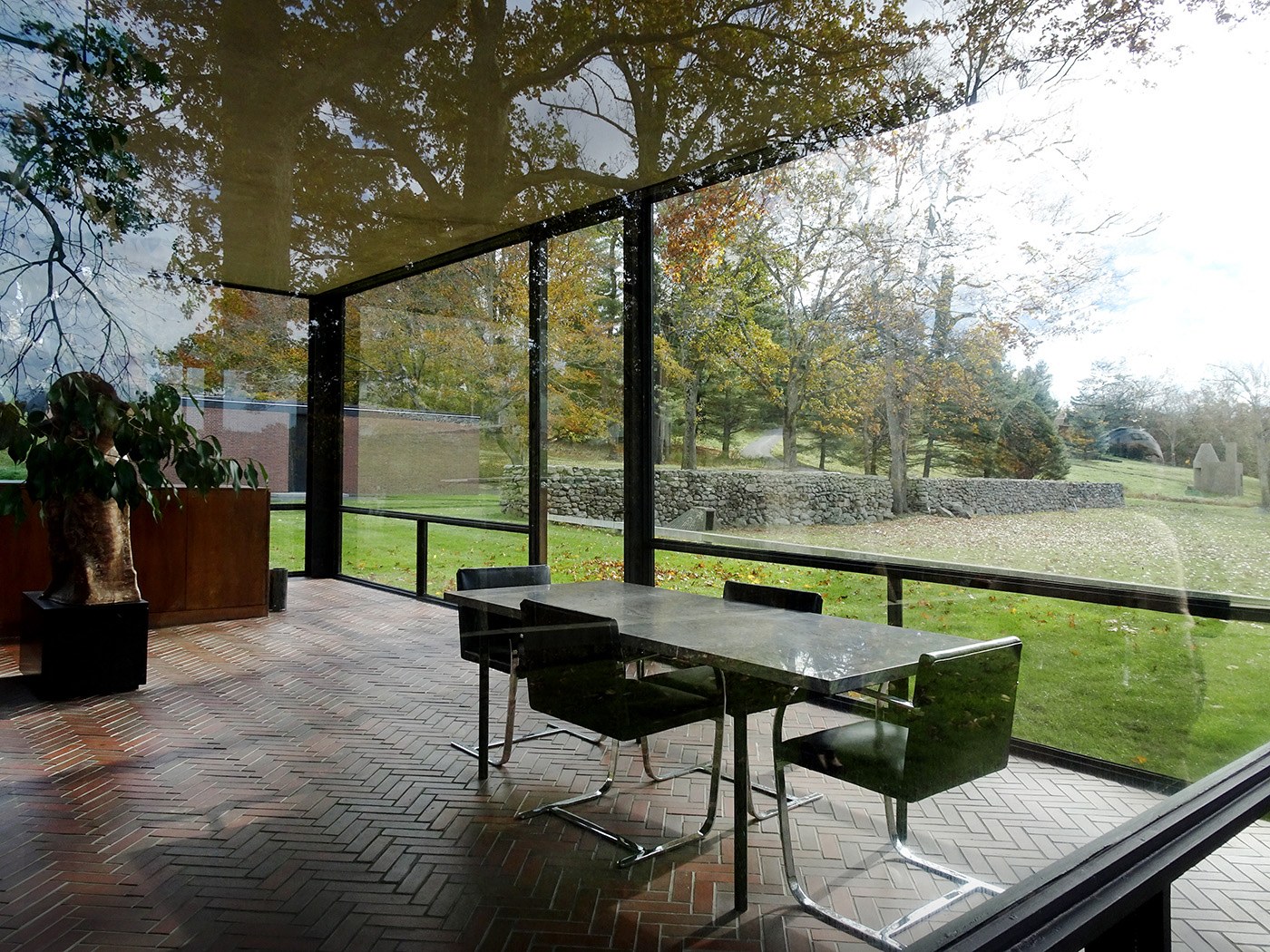 Walking round, it strikes me that Simon Mawr’s novel of Mies’s Villa Tugendhat, The Glass Room, is about a glass house, whereas Philip Johnson’s Glass House is a glass room.

Reference to Mies van der Rohe is not incidental, in fact is inevitable, at the Glass House, built by Philip Johnson (1906-2005) at New Canaan outside New York in 1949. Johnson curated the International Style and Mies van der Rohe exhibitions of 1932 and 1946 at MoMA in New York. The later solo show included a model of Mies’s then unbuilt Farnsworth House (1951), undeniably and unmistakably the model for Johnson’s Glass House, which, probably by dint of being both architect and client, he was able to annoy Mies by finishing first, so threatening to steal the credit. Charitably, it was just the haste to be first, but Johnson’s is not nearly the perfectly resolved work that Mies’s was (it bugs me the floor bricks are different to the drum bricks, or that the edge of the herringbone floor pattern is not expressed externally), and Johnson ducked to an even greater degree than Mies the question of how to accommodate the messy realities of life within the abstract ideal of an entirely glazed enclosure.

Johnson’s response, though, hints at a freer take on life, with its asymmetrically-placed brick fireplace/shower room drum implying freedom from the constraints of perfection, though this is undermined with the knowledge that Johnson left diagrams precisely setting out the rugs within the space, the furniture on the rugs, and even the objets on the furniture. So, relaxed it was not, and its sense of repose for the soul comes not from physical comfort or from having abandoned social codes along with its walls, but from the intellectual and aesthetic comfort provided by looking out uninterrupted into the surrounding tree canopy.

The Glass House notionally has a central hall and living room, with dining room and kitchen, bedroom, study and shower room to either side, but really, and solely, it is a pavilion from which to view nature, the mundanities of life purged. Cooking was done in other houses on the estate and brought across, or limited to Johnson’s preferred tuna sandwiches (arguably falling short of the high ideals of this abstract temple). Likewise laundry, and even sleeping – despite the sleeping area defined by the freestanding wardrobe, Johnson and his partner David Whistler, and their guests, slept across the lawn in the companion Brick House, finished a year ahead of its Glass brother, and which should be seen as its contrary twin, its earthbound brick providing dependable enclosure, warmth, shelter and shade, to glass’s transparency and irresolute state, even if sleeping there must have lacked the profundity of waking amongst the treetops.

Over the years, funded by aluminium shares, Johnson added parcels of land, on which he built a series of buildings with functions that indulged the limitations of the Glass House, along with various works of landscape art, their distance paying due respect to the original. The Painting Gallery was built in 1965, underground – perhaps solely to necessitate it having walls so that paintings could be hung (the Glass House has a sole Poussin-attributed landscape, mounted on an easel, in full sun, no doubt in contravention of all conservational guidelines). Then a sculpture gallery (1970) in painted brick, with an informal central space that makes lesser demands on the display of art than the Glass House (which has an ancient-looking sculpture by Elie Nadelman looking out to the south, as pair to the Poussin). They may seem whimsical outbuildings, but Johnson had need of both: he, with Whistler, amassed a substantial collection of post-war modern art, donating a colossal 2,200 works to MoMA over his life.

In 1980 a small cube of a Library was built, in which books could be housed and comfortably read, away from the persistent glare of unshaded sunlight and the irresistible distraction of the trees. Later, two neighbouring farmhouses and a cottage were added, old enough to have traditional rooms and the reassuring comfort of windows and walls, where real life was lived. And not to miss out, last was Da Monsta, a Gehry-esque (Frank Stella-esque if you believe Johnson) visitor centre in 1995.

The outlying buildings collectively take up the slack to leave the Glass House unsullied, a high Modernist pavilion in the classical tradition, for high-minded social gatherings (of a formal nature, accompanied with cocktails), and solitary abstract reflection. At this, it succeeds (well, assuming you were there in the fleeting cusp between seasons when the space was neither under- nor over-heated).

Mies need not have worried about the threat Johnson posed. Johnson’s career closely followed the trajectory of prevailing late C20th architectural discourse rather than leading it, or setting its own path. Each stage of his journey is recorded in a building on the Glass House estate – Johnson called it his ‘diary of an eccentric architect’ – to the extent that together they provide a thorough guide to late twentieth-century architectural history and theory, in built form. He was good at mime.

If that sounds dismissive, it should be recorded that the Glass House itself is a building of great beauty: in its simplicity and proportion, in the refinement and arrangement of the objects and furniture within (Mies’s famous daybed was commissioned by Johnson and designed for the house), and in its framing of nature without, surely more ceaselessly beautiful and mesmerising than any artwork could hope to be. And by its very presence, the Glass House reveals a beauty latent in the site, making of this quiet patch of land a place charged with power.

Into this harmonious context, the earliest of the outbuildings hums a troubling note. There is a powerful feeling from behind the glass of peaceful coexistence with nature, but the Pavilion in the Pond (1962) on the floor of the valley below, built at half-scale to flatter the size of the lake/pond it sits on, speaks of a discordant belief in the mastery of man over nature. Not tall enough to stand in, so otherwise entirely useless, it is perhaps there to act as decoy, to disguise the fact that the Glass House is the real temple, pavilion but no more, and not the house its name would have you believe.

As a house, the whole 50-acre estate must be accounted. And then either it is a faintly ludicrous and wildly dysfunctional place, where shoes must be changed, coats donned, umbrellas unfurled and time allowed in performance of even the simplest functions of life, or alternatively it is a place in which all elements of life, from the lowliest activities of its days to the highest of the mind, are examined, deconstructed and celebrated.

In fact, it is both of these places, infuriating and rewarding, and in whichever reading and whatever the man, is a place to heighten the mundane experience of life.