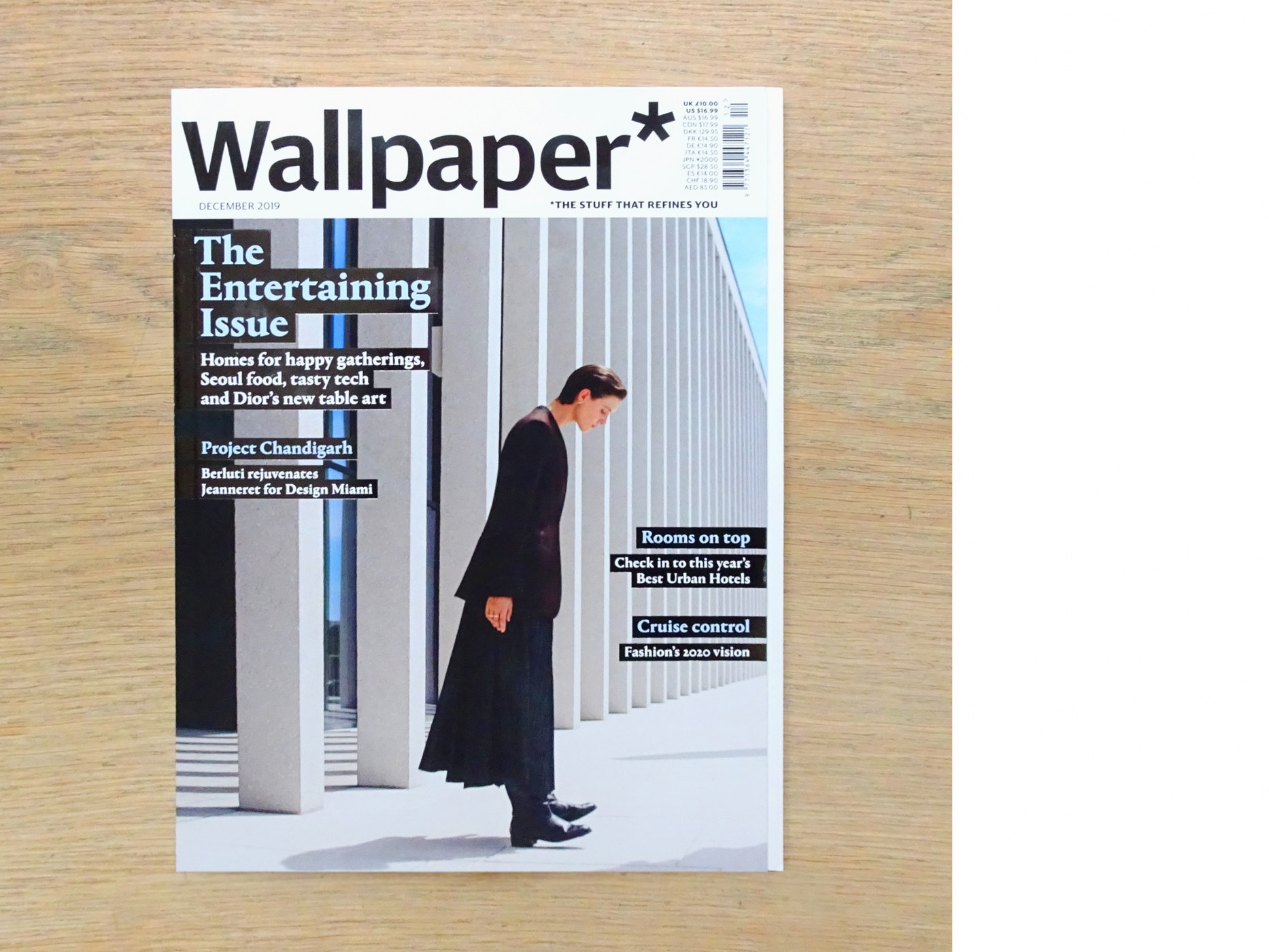 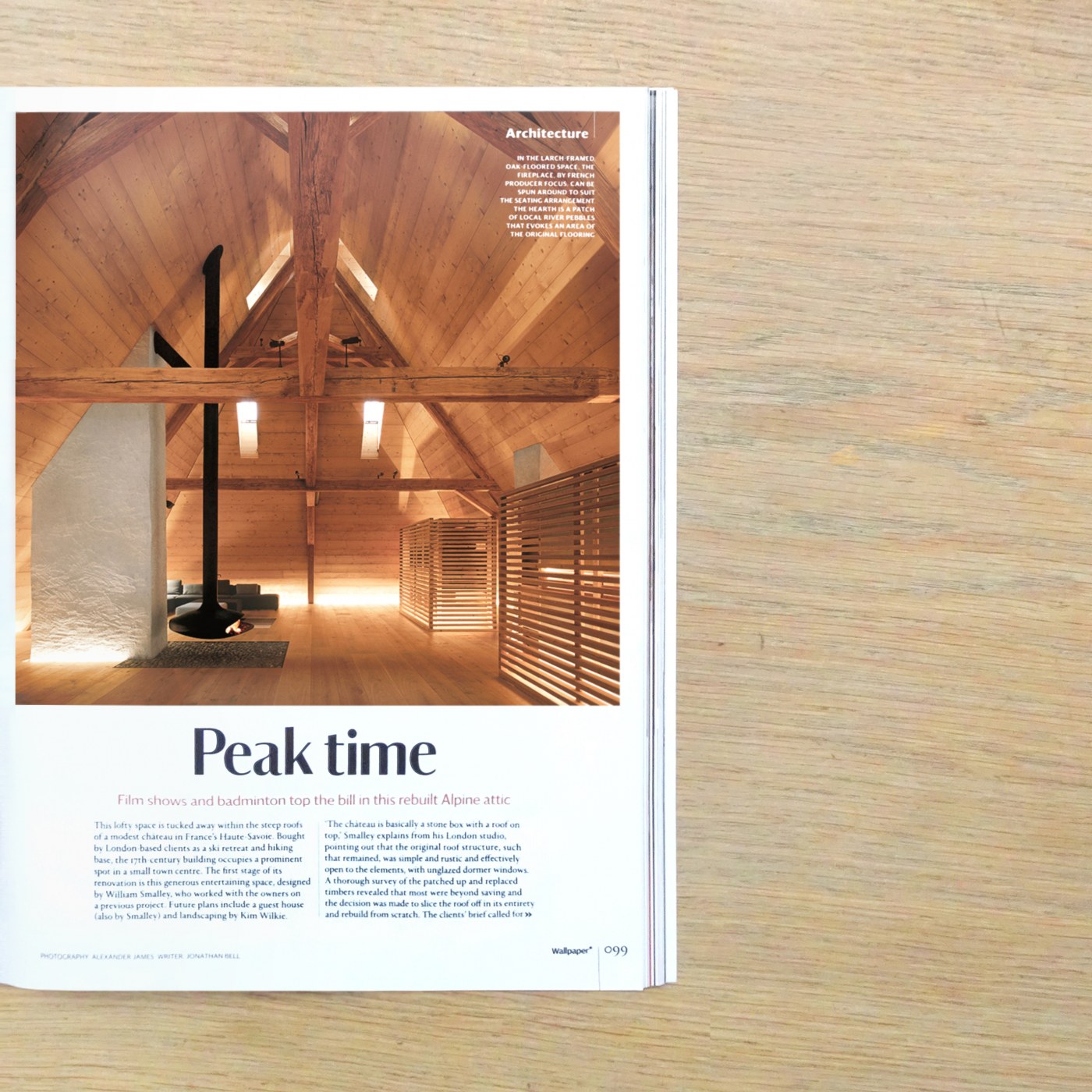 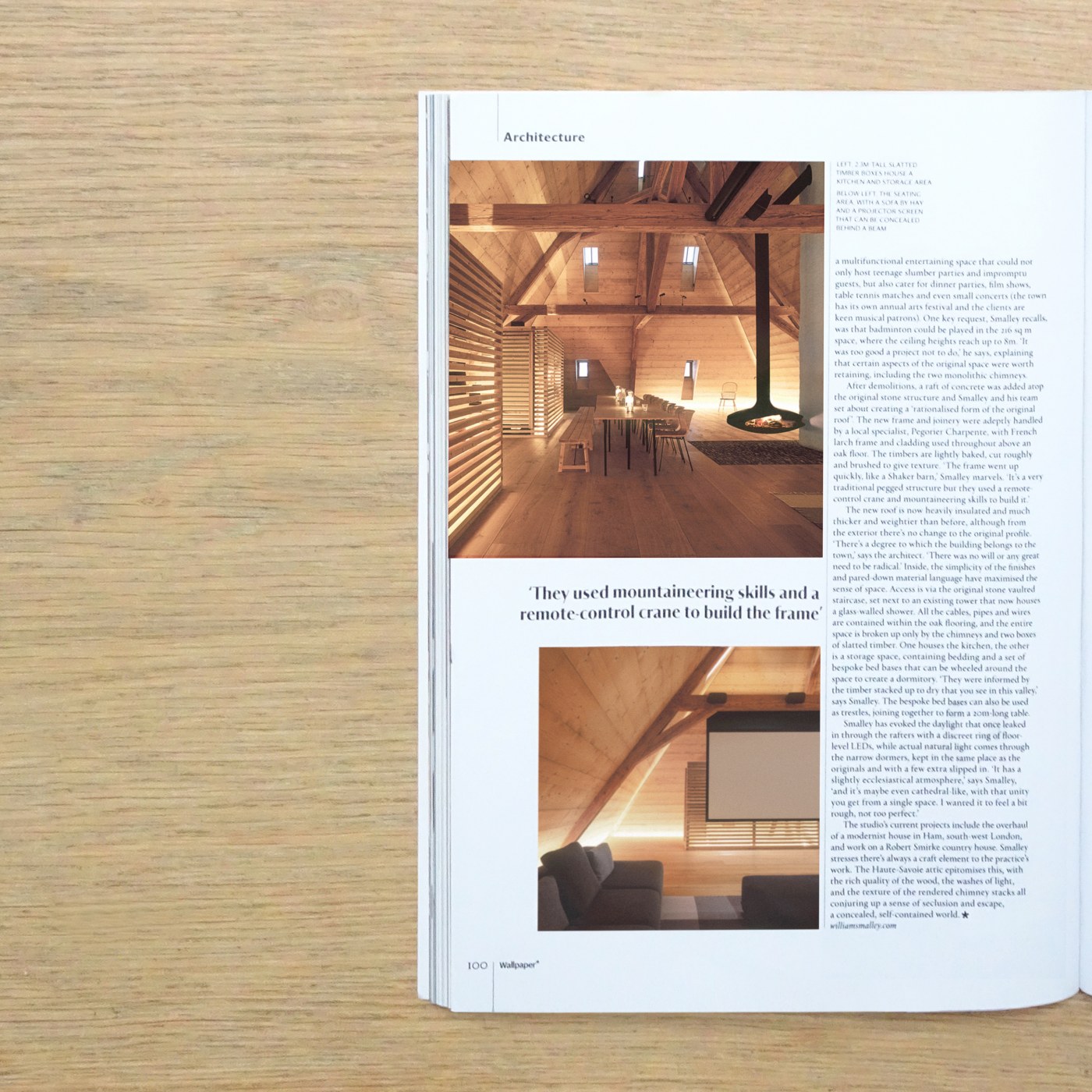 This lofty space is tucked away within the steep roofs of a modest chateau in France’s Haute-Savoie. Bought by London-based clients as a ski retreat and hiking base, the 17-th century building occupies a prominent spot in a small town centre. The first stage of its renovation is the generous entertaining space, designed by William Smalley, who worked with the owners on a previous project. Future plans include a guest house (also by Smalley) and landscaping by Kim Wilkie.

‘The chateau is basically a stone box with a roof on top,’ Smalley explains from his London studio, pointing out that the original roof structure, such that remained, was simple and rustic and effectively open to the elements, with unglazed dormer windows. A thorough survey of the patched up and replaced timbers revealed that most were beyond saving and the decision was made to slice the roof off in its entirety and rebuild from scratch. The clients’ brief called for a multifunctional entertaining space that could not only host teenage slumber parties and impromptu guests, but also cater for dinner parties, film shows, table tennis matches and eleven small concerts (the town has its own annual arts festival and the clients are keen musical patrons). One key request, Smalley recalls, was that badminton could be played in the 216 sq m space, where the ceiling heights reach up to 8m. ‘It was too good a project not to do,’ he says, explaining that certain aspects of the original space were worth retaining, including the two monolithic chimneys.

After demolitions, a raft of concrete was added atop the original stone structure and Smalley and his team set about creating a ‘rationalised form of the original roof’. The new frame and joinery were adeptly handled by a local specialist, Pregorier Charpente, with French larch frame and cladding used throughout above an oak floor. The timbers are lightly baked, cut roughly and brushed to give texture. ‘The frame went up quickly, like a Shaker barn,’ Smalley marvels. ‘It’s a very traditional pegged structure but they used a remote-control crane and mountaineering skills to build it.’

The new roof is now heavily insulated and much thicker and weightier than before, although from the exterior there’s no change to the original profile. ‘There’s a degree to which the building belongs to the town,’ says the architect. ‘There was no will or any great need to be radical.’ Inside, the simplicity of the finishes and pared down material language have maximised the sense of space. Access is via the original stone vaulted staircase, set next to an existing tower that now houses a glass-walled shower. All the cables, pipes and wires are contained within the oak flooring, and the entire space is broken up only by the chimneys and two boxes of slatted timber. One houses the kitchen, the other is a storage space, containing bedding and a set of bespoke bed bases that can be wheeled around the space to create a dormitory. ‘They were informed by the timber stacked up to dry that you see in this valley,’ says Smalley. The bespoke bed bases can also be used as trestles, joining together to form a 20m-long table.

Smalley has evoked the daylight that once leaked through the rafters with a discreet ring of floor-level LEDs, while actual natural light comes through the narrow dormers, kept in the same place as the originals and with a few extra slipped in. ‘It has a slightly ecclesiastical atmosphere,’ says Smalley, ‘and it’s maybe even cathedral-like, with that unity you get from a single space. I wanted it to feel a bit rough, not too perfect.’

The studio’s current projects include the overhaul of a modernist house in Ham, south-west London, and work on a Robert Smirke country house. Smalley stresses there’s always a craft element to the practice’s work. The Haute-Savoie attic epitomises this, with the rich quality of the wood, the washes of light, and the texture of the rendered chimney stacks all conjuring up a sense of seclusion and escape, a concealed, self-contained world.