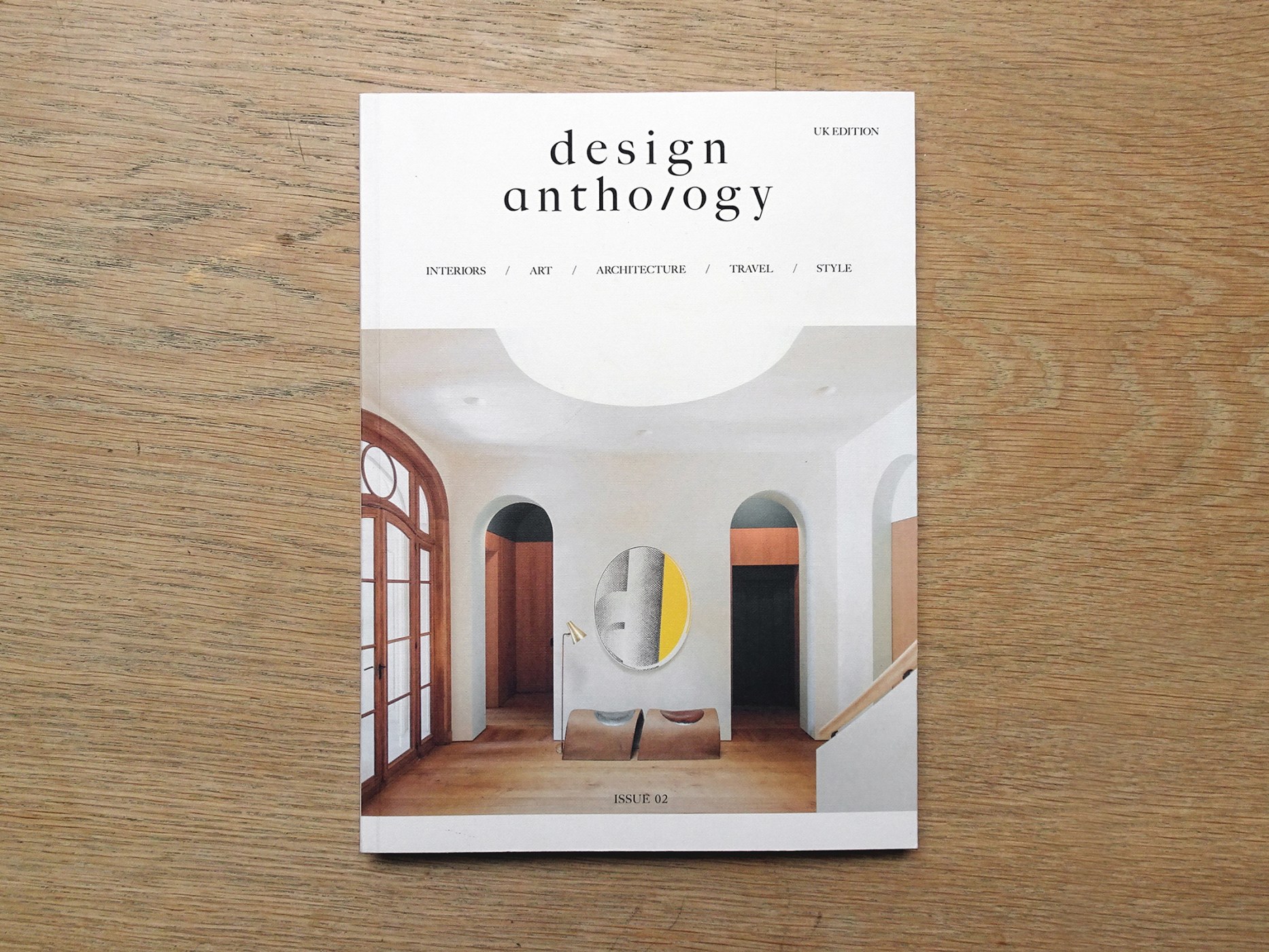 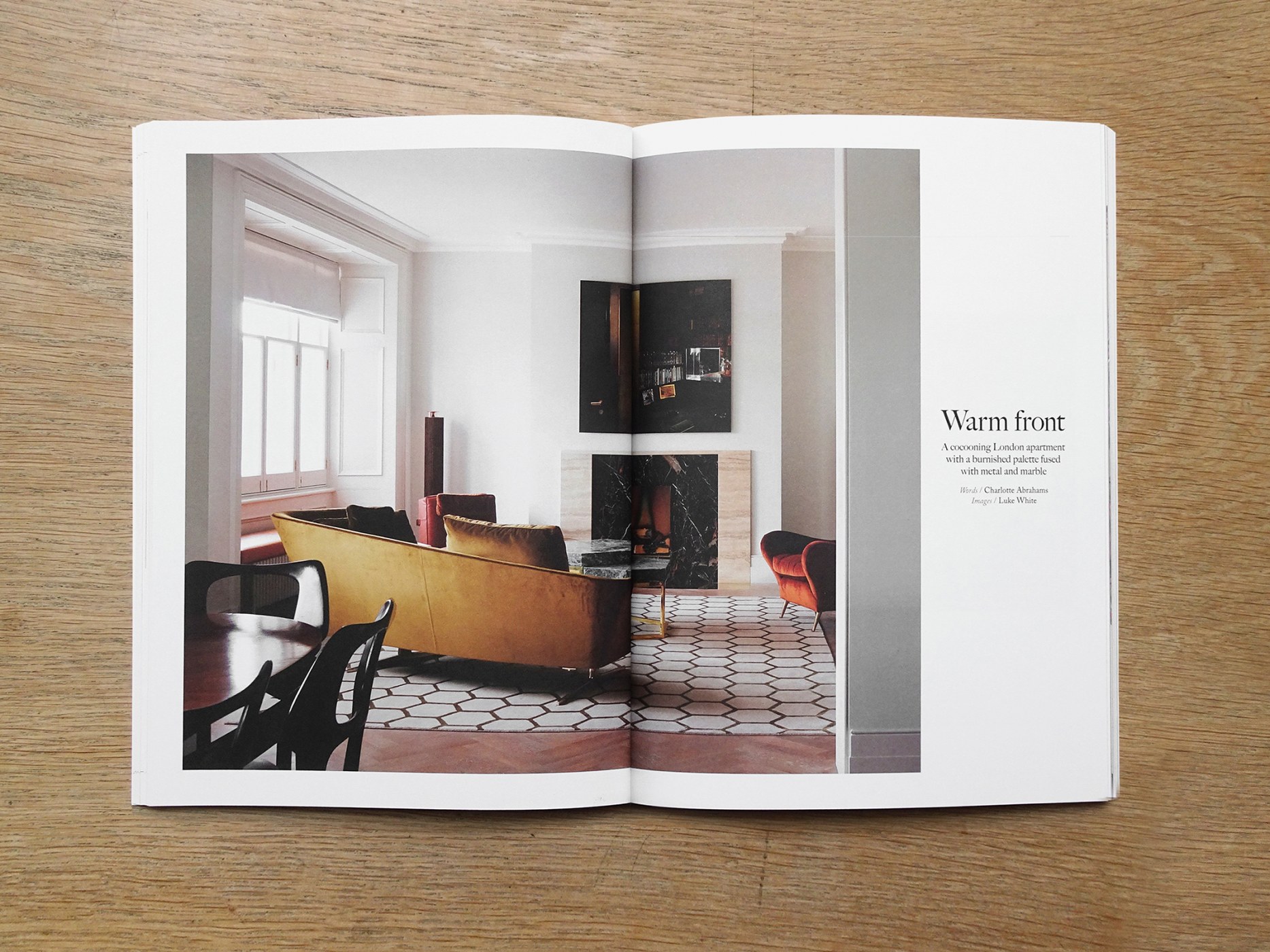 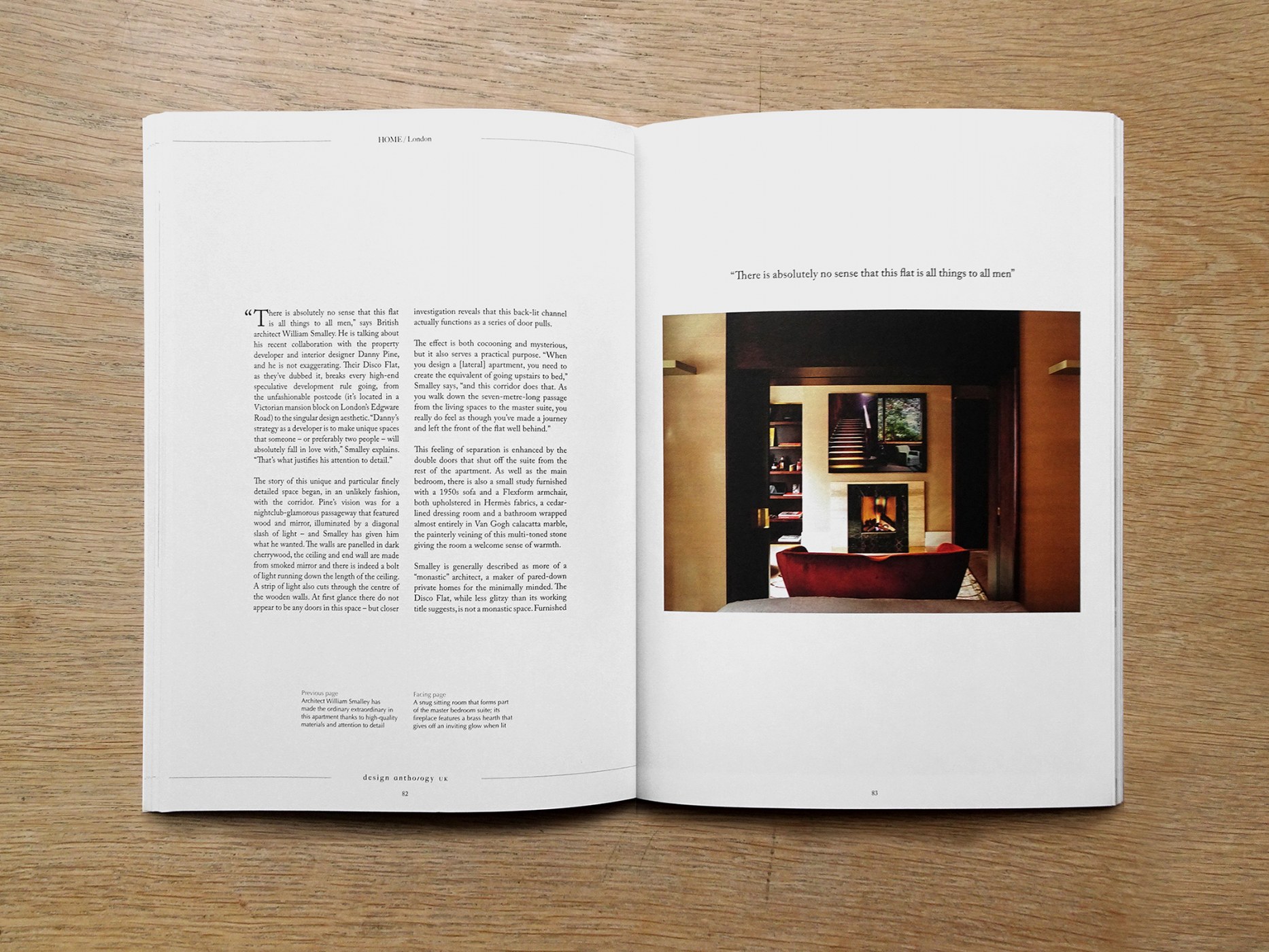 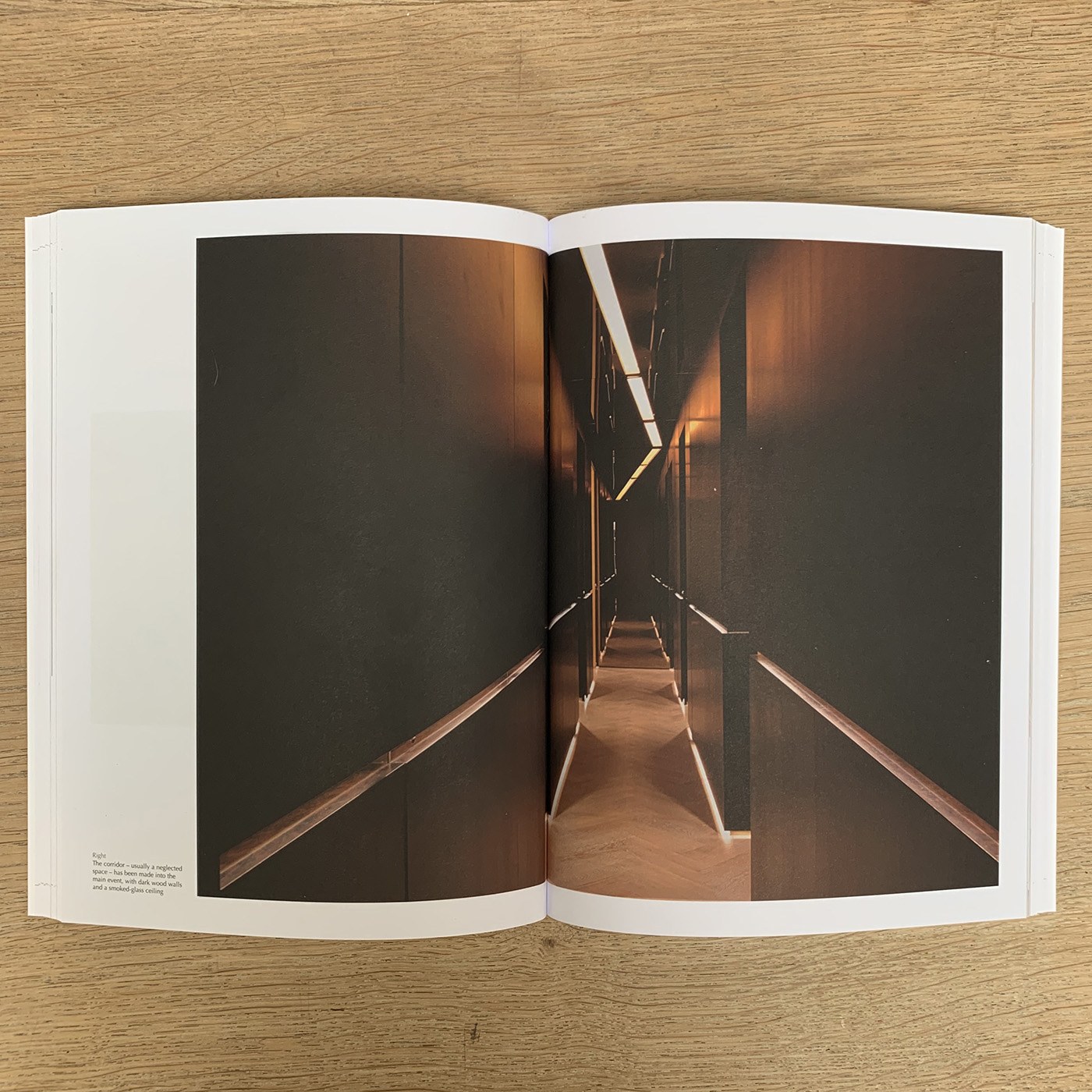 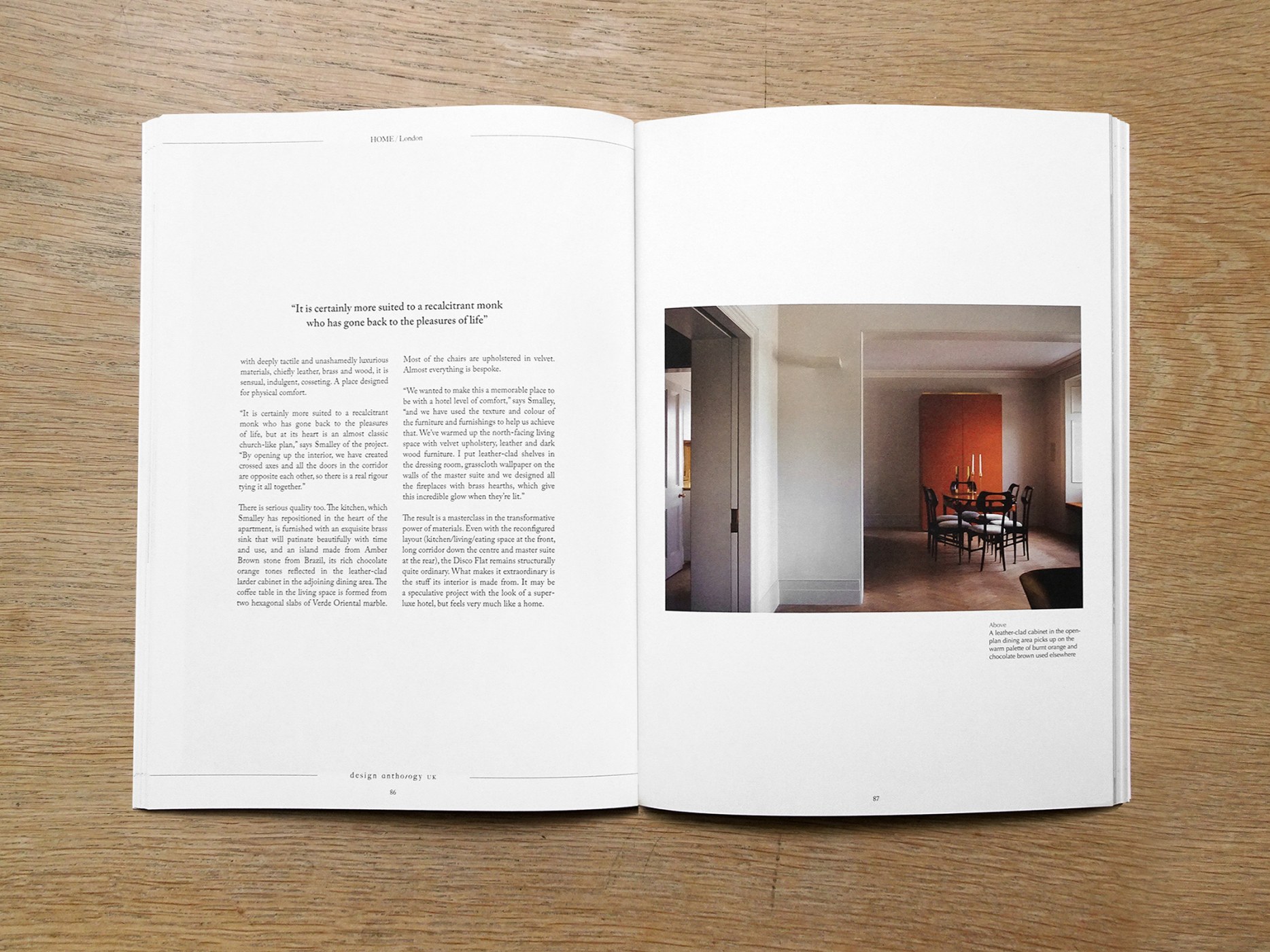 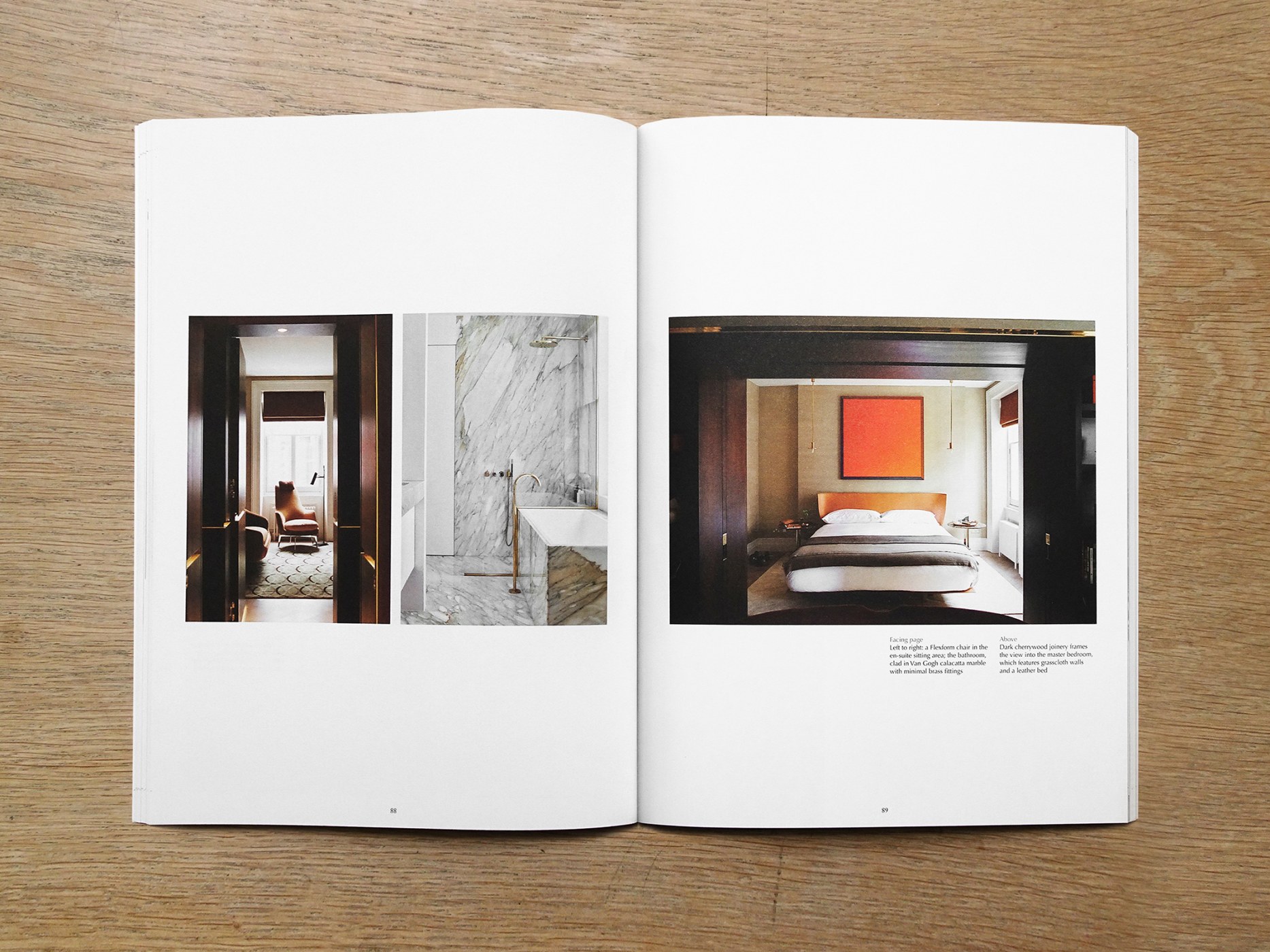 “There is absolutely no sense that this flat is all things to all men,” says architect William Smalley. He is talking about his recent collaboration with the property developer and interior designer Danny Pine, and he is not exaggerating. Their Disco Flat, as they’ve dubbed it, breaks every high-end speculative development rule going, from the unfashionable postcode (it’s located in a Victorian mansion block on London’s Edgware Road) to the singular design aesthetic. “Danny’s strategy as a developer is to make unique spaces that someone will absolutely fall in love with,” Smalley explains. “That’s what justifies his attention to detail.”

The story of this unique and particularly finely detailed space began, in unlikely fashion, with the corridor. Pine’s vision was for a nightclub-glamorous passageway that featured wood and mirror, illuminated by a diagonal slash of light – and Smalley has given him what he wanted. The walls are panelled in dark cherrywood, the ceiling and end wall are made from smoked mirror and there is indeed a bolt of light running down the length of ceiling. A strip of light also cuts through the centre of the wooden walls. At first glance there do not appear to be any doors in this space – but closer investigation reveals that this back-lit channel actually functions as a series of door pulls.

The effect is both cocooning and mysterious, but it also serves a practical purpose. “When you design an apartment you need to create the equivalent of going upstairs to bed,” Smalley says, “and this corridor does that. As you walk down the seven-metre-long passage from the living spaces to the master suite, you really do feel as though you’ve made a journey and left the front of the flat well behind.”

This feeling of separation in enhanced by the double doors that shut off the suite from the rest of the apartment. As well as the main bedroom, there is also a small study furnished with a 1950s sofa and a Flexform armchair, both upholstered in Hermès fabrics, a cedar-lined dressing room and a bathroom wrapped almost entirely in Van Gogh Calacatta marble, the painterly veining of this multi-toned stone giving the room a welcome sense of warmth.

Smalley is generally described as more of a “monastic” architect, a maker of pared-down private homes for the minimally minded. The Disco Flat, while less glitzy than its working title suggests, is not a monastic space. Furnished with deeply tactile and unashamedly luxurious materials, chiefly leather, brass and wood, it is sensual, indulgent, cosseting. A place designed for physical comfort.

“It is certainly more suited to a recalcitrant monk who has gone back to pleasures of life, but as its heart is an almost classic church-like plan,” says Smalley of the project. “By opening up the interior, we have created cross axes so that all the doors in the corridor are opposite each other, so there is a real rigour tying it all together.”

There is serious quality too. The kitchen, which Smalley has repositioned in the heart of the apartment, is furnished with an exquisite brass sink that will patinate beautifully with time and use, and an island made from amber brown stone from Brazil, its rich chocolate orange tones reflected in the leather-clad larder cabinet in the adjoining dining area. The coffee table in the living space is formed from hexagonal slabs of Verde Oriental marble. Most of the chairs are upholstered in velvet. Almost everything is bespoke.

“We wanted to make this a memorable place to be with a hotel level of comfort,” says Smalley, “and we have used the texture and colour of the furniture and furnishings to help us achieve that. We’ve warmed up the north-facing living space with velvet upholstery, leather and dark wood furniture. We put leather-clad shelves in the dressing room, grasscloth wallpaper on the walls of the master suite and we designed all the fireplaces with brass hearths, which give this incredible glow when they’re lit.”

The result is a masterclass in the transformative power of materials. Even with the reconfigured layout (kitchen/living/eating space at the front, long corridor down the centre and master suite at the rear), the Disco Flat remains structurally quite ordinary. What makes it extraordinary is the stuff its interior is made from. It may be a speculative project with the look of a super-luxe hotel, but feels very much like a home..